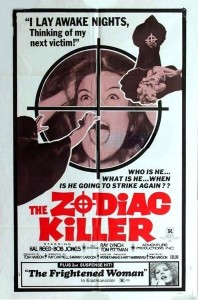 Are you a big fan of David Fincher? I tend to have a “love it or hate it” attitude toward his work myself, with the flicks I love being ones I really love and those I hate being ones I really hate. The funny thing is, the films of his that I don’t like seem to be the ones everybody else likes (SE7EN, the ridiculously over-rated FIGHT CLUB), and those I like tend to be the ones everybody else doesn’t like (ALIEN 3, THE GAME). One area of agreement I do seem to have with the grizzled, hard-core Fincher-fans, though, is that while movies like THE SOCIAL NETWORK and THE CURIOUS CASE OF BENJAMIN BUTTON are the ones that have gotten him the most critical acclaim, his best work is — far and away — ZODIAC, which isn’t just the finest entry into the director’s ouevre, but one of the most tense, provocative, deeply-affecting, and flat-out awesome crime flicks ever made by anyone.

Fuck. Sorry about all the italics in that paragraph, I’ll try to chill on that from here on out. Here’s the “point” (to the extent I have one) that I’m getting to here, though — I bet Fincher himself isn’t much of a fan of director Tom Hanson’s 1971 non-thriller THE ZODIAC KILLER (also released under the titles of THE ZODIAK KILLER and, you guessed it — ZODIAC), simply because it’s hard to imagine any two films that are (ostensibly, at any rate) about the same subject being as diametrically opposite to each other as Fincher’s smart, psychologically-probing one and Hanson’s throwaway piece of trash.

Not that we have anything against throwaway pieces of trash around here, mind you — and truth be told, I don’t even have that much against THE ZODIAC KILLER. Sure, it’s tasteless in the extreme to try to wring a few bucks out of actual crimes that left a lot of friends and family members of the victims grieving in their wake, and it’s probably even more tasteless to release such a film while said events are still taking place in order to capitalize on the public’s then-current paranoia and unease, but in a way isn’t that, if not more ethical, at least more honest than covering your work in some veneer of “respectability” while still actively playing to the ticket-buyer’s innate fear of mass murderers and serial killers?

Sure, ZODIAC is a classier and better production in every respect than THE ZODIAC KILLER could ever dream of being, but at its core, it’s still exploiting human tragedy for the sake of box-office dollars just like its cheap, sleazy predecessor did four decades earlier, isn’t it? Anybody wanna take that one? Bueller? 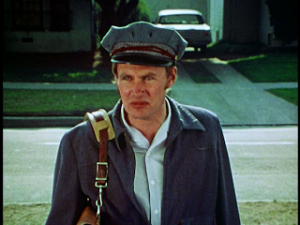 Meet Jerry (played by Hal Reed, pictured at right), a shy, reclusive mailman who’s awkward and stand-offish around women (even though he’s not above scoring some tail while going about his daily rounds), keeps bunny rabbit as pets, and lives a quiet, solitary life. He also has a thing for wearing black robes, worshiping at a half-assed occult altar he keeps hidden behind a curtain, and oh yeah — he’s the Zodiac killer. Don’t worry, I’m not giving much away here — the film tips its hand at about the halfway point after dropping a “red herring” storyline that tries, lamely, to convince us that Jerry’s buddy, an uber-misogynistic truck driver named Grover (Bob Jones), just might be America’s most famous-at-the-time serial psycho himself. Where, how, and why Jerry got his deep-seated misanthropy is never really explained until it’s way too late and we see him sobbing to his dementia-addled father about how mommy died young and daddy never showed him “any expression of feeling,” but shit — motivations really don’t matter much here, anyway.

Nor, apparently, does factual accuracy — while a couple of the murders shown are generally in line with those we know the Zodiac committed (one of which, the infamous multiple-stab-wounds knife attack on a couple of young lovers by a lake,  is probably the only one in the film that could be described as being effectively staged), most are pulled right out of the filmmaker’s asses, such as a broad-daylight attack on a teenage girl in the middle of the street that sees Zodiac “disguised” in one of those stupid Groucho Marx-nosed masks (I half expected him to jump out from behind the bushes and say “alright stop what you’re doin’, ‘cuz I’m about to ruin, the image and the style that you’re used to”) and an unbelievable murder at a senior citizens’ home that sees our “perp” pushing a an old timer’s wheeled lawn chair down a hill, through a busy intersection, and finally down a flight of stairs. This is a Zodiac killer who apparently just offs anybody who’s handy by whatever means available.

I know, I know — a few minutes ago I opined that THE ZODIAC KILLER was, after a fashion at any rate, more honest than Fincher’s (justly) much-more-celebrated work, but I was only talking about its intentions, not its content, because the simple fact here is that, despite boasting the apparently-active participation of the San Francisco Chronicle reporter known as “Mr. Zodiac” himself, Paul Avery (portrayed in Fincher’s film by Robert Downey, Jr.),  this flick is complete and utter bullshit.

But is that such a bad thing? I mean, we know what the Zodiac killer did in real life, but we have no fucking clue what he might do next here. And that “don’t give a shit” attitude is, I’m happy to say, readily apparent throughout this movie. Hanson and his screenwriters quite clearly don’t give a shit about women, which isn’t cool, but they also don’t give a shit about cops, which in my admittedly juvenile worldview is, and every single character here is quick to ooze resentment toward the bullies in blue at the drop of a hat — even nice, mild-mannered guys (when he’s not, ya know, killing people for no reason at all) like Jerry. Plus, the detectives investigating the case are portrayed as officious, bungling, incompetent imbeciles, which is always fun to see. 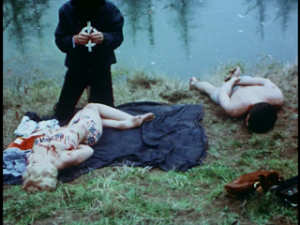 Still, there’s an incongruity to this flick’s attitude toward crime and those who supposedly “protect” us from it that’s positively dizzying. After spending its entire runtime telling us what a bunch of good-for-nothing buffoons the cops are, Jerry’s interior monologue at the end, as he roams the streets scot-free, is right out of the right-wing authoritarian douchebag’s playbook, as he “tells” us that the “system” is designed to protect his rights, doesn’t really care about helping the victims, the pigs’ll never get him because they need pesky things like search warrants, and shit, even if they do eventually put him away, he’ll probably just get out in a few years, anyway. According to THE ZODIAC KILLER, then, the police are stupid assholes who can’t do anything right — but who, nevertheless, shouldn’t have to read us our Miranda rights and should have the power to search our homes, cars, and persons on a  whim.  Go figure that one out.

Obviously, this isn’t a flick that’s bothered to think anything through very much, both in terms of its relationship to actual, documented reality or its general philosophical outlook, and at the end of the day that’s probably the most interesting thing about it. It’s available on DVD from Something Weird Video (where it’s presented in a reasonably good-looking full-frame transfer with mono sound) as part of a triple-bill that also includes THE SEX KILLER (great first-date viewing) and ZERO IN AND SCREAM (extras are sparse on this one compared to other SWV offerings and are pretty much limited to a smattering of trailers, but what the hell, you’re getting three movies, right?) so you can judge its relative “merits” — or complete lack thereof — for yourself, and I’d urge you to do so. It’s about as far-removed from an exploitation “classic” as you can get, but it’s at least as schizophrenic as the killer whose crimes it supposedly “documents,” and  that’s enough right there to make for an interesting time in my book.