I’m sure some enterprising young film studies scholar can come up with a sociological reason behind the resurgence of home invasion horror films over the past decade or so.  Maybe it’s something about people no longer feeling safe at home due to overzealous reporting on home-based murders and burglaries, despite the fact that such crimes are lower than they’ve been in decades.  Something something Facebook paranoid economic poverty something.  You write it.  I’ve long been past the point of having to work on a thesis. 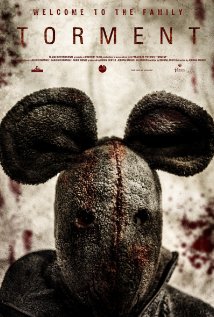 Jordan Baker’s TORMENT, no relation to the 1986 film of the same name*, is a home invasion film, its cover art clearly attempting to mimic YOU’RE NEXT, Adam Wingard’s solid home invasion flick that received a fair share of attention when it was finally released last year.  In contrast to YOU’RE NEXT, however, TORMENT is a much more straightforward film, sans the slight of hand or impressively resourceful leading lady.  TORMENT is pretty much the home invasion film stripped bare, though there is a minor twist that justifies the Nietzsche quote that starts the film.

Not that there’s anything wrong with that.  A solid film can be made out of simple concept, executed well, and that’s certainly evident for a chunk of TORMENT.  After an introductory sequence involving a family getting quickly attacked by unseen intruders, we’re introduced to a family of three on their way to their summer home.  We learn that this family has been created rather recently, with Sarah (AMERICAN MARY’s Katharine Isabelle) serving as new stepmother to the young Liam (Peter DaCunha) after marrying his widowed father Cory (Robin Dunne). 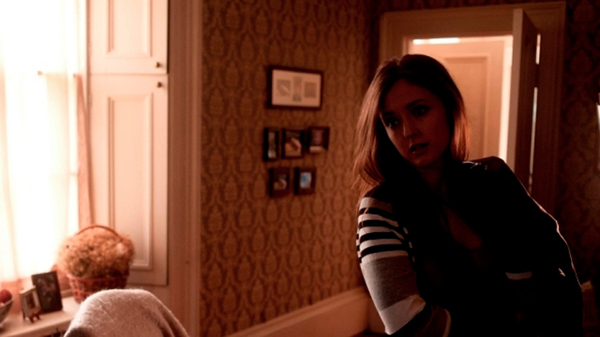 With this new relationship comes the expected stress, as Liam sees Sarah as a replacement for his deceased mother and is accordingly threatened, throwing a tantrum when Sarah sits in his mother’s rocking chair. Cory tries to reconcile the two, but it’s certainly a tough road to tread, one made even tougher when they discover that somebody’s been in the house, though they dismiss it as a burglary that’s been over and done with, a suggestion shared by local sheriff Stephen McHattie.

Soon, however, the invaders seen (or at least alluded to) in the introduction start making their night hell, utilizing the heads of Liam’s stuffed animals for masks. The gang of intruders separates the group (which isn’t hard, with Liam’s surliness causing him to go outside), capturing Cory and keeping Sarah on the run. Liam is nowhere to be seen, and Cory’s captors allude to his fate…

TORMENT manages to build up a fair share of suspense, making good use of dark corridors and creepy woods locales even if it the use of darkness sometimes borders on making action difficult to make out. Spending time establishing the family as a developed batch of characters is a rewarding one, allowing you to actually want these folks to get through the night alive. Isabelle and Dunne make for engaging leads, and their attackers are certainly frightening presences, as while the “faceless, masked invader” may be an archetype by this point, it’s still an effective one. The only issue is with their voices – neither moody enough to be frightening nor muffled enough to be convincing coming out of hastily-assembled stuffed animal heads, they don’t quite ring as “true” when they attempt to be menacing. 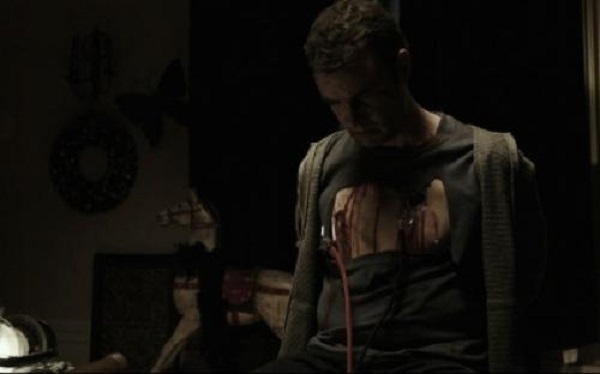 But the biggest issue with TORMENT is that it doesn’t offer anything new to the genre, and doesn’t even fully explore the concepts that it sets up in its premise. We establish that the intruders are looking to complete their twisted family, which is a fine idea, but we don’t get a lot more than that, and the larger psychologically dramatic moments are an attempt to persuade Cory into convincing Liam that he no longer loves him. It’s a tense scene, but it’s one quickly reconciled – a reconciliation that wouldn’t have come nearly as easily had Cory been the well-meaning step-parent instead of the “dad” whose love could never be fully called into question.

Still, a few missed opportunities (and a ridiculously unnecessary coda of an ending that negates some of the suspense Baker has carefully crafted) aside, TORMENT is a well-made, engaging little thriller that’s briskly paced and features some talented performers doing what they do best. It won’t make anyone forget FUNNY GAMES, THE STRANGERS or YOU’RE NEXT, but it’s a passable way to spend an hour and a half even if you may be struggling to remember any details about the film by the next day.

*When is THAT getting a DVD release?

TORMENT is now on VOD and DVD.