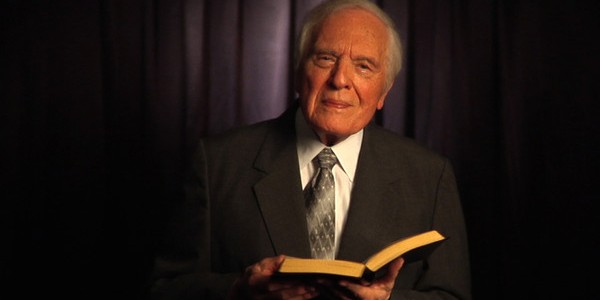 To at least two generations of horror movie fans, Scrimm will forever be “The Tall Man” from Don Coscarelli’s PHANTASM films. With his imposing 6’4″ frame given a boost by lifts in his boots, a scowl of disapproval across his face and, and a gravelly voice that turned “Booooyyyy!” into a gut-punch of a movie ending, he became an overnight horror icon.

Born Lawrence Rory Guy (he did not take on the screen name of Angus Scrimm until the release of PHANTASM) on August 19, 1926, he moved to California as a teenager to become an actor. He studied drama at the University of Southern California under William C. DeMille, brother of the famed director before moving on to stage acting and journalism, writing for numerous publications. He eventually became a prolific writer of liner notes for albums, winning a Grammy for his work.

For a man who compiled over fifty film and television appearances in his career, Scrimm’s first screen appearance came fairly late in life with the bizarre early Curtis Hanson film, SWEET KILL. Following a bit part as a doctor in the goofy as hell psycho-killer flick, SCREAM BLOODY MURDER, Coscarelli cast him as the alcoholic father of the titular character in JIM, THE WORLD’S GREATEST. When the film was released, Scrimm was already fifty-years-old and still three years away from the release of the first PHANTASM.

The role of The Tall Man opened up a new career for Scrimm as a horror favorite. In addition to reprising his role as The Tall Man in four PHANTASM sequels (PHANTASM: RAVAGER is set to be released at some point in 2016), he appeared in countless films that still clutter the video store-addled memory of ’80s children: Jim Wynorski’s THE LOST EMPIRE and CHOPPING MALL (the latter being an unacknowledged cameo), SUBSPECIES, MINDWARP, MUNCHIE, TRANSYLVANIA TWIST.

Eventually, the roles slowed down, but filmmakers who had grown up on his films, gave his career a resurgence starting in 2001 when J.J. Abrams cast him in a recurring role on Alias. From there, Scrimm appeared in numerous Glass Eye Pix productions including THE OFF SEASON, AUTOMATONS, SATAN HATES YOU, and I SELL THE DEAD. He also continued to work with Coscarelli outside of the PHANTASM films, in the Masters of Horror episode Incident on and Off a Mountain Road and im the recent cult favorite, JOHN DIES AT THE END.

PHANTASM: RAVAGER will apparently be Scrimm’s final film appearance. It is a fitting end to the career of a man who was one of the last horror icons standing.

Now that I have the obituary part of this post out of the way, I’d like to write about Angus Scrimm in a less objective manner. Call this what you well—a personal remembrance, a tribute, etc.

I fell in love with horror films at a much older age than most fans. I mostly avoided them until I was nearly twenty-years-old. At that point, I discovered what I had been missing and started consuming them at a voracious pace. Somewhere in my first year of renting basically every VHS tape in the horror section at my neighborhood video store (R.I.P. Video City), I watched PHANTASM for the first time.

That first viewing was akin to having a religious experience. I had no clue what the hell I had just watched. The story did not follow any apparent logic and the filmmaking and acting was clunky at times. But man, was I unnerved. Don Coscarelli had tapped into the macabre, unpleasant thought that I have had at funerals; namely that no matter what we may believe about an afterlife, when our loved ones die, we place their bodies in the hands of strangers so that we can have our ceremony to honor them. But what if that’s not them in the coffin? What if something sinister is happening behind closed doors in the funeral parlor? Clearly, I have thought too much about death in my life.

But after that first viewing, I did not yet understand the nerve that Coscarelli had touched in my subconscious. All my mind was buzzing about was demonic dwarves that bled yellow fluid when injured, flying silver spheres that drilled into people’s heads and sucked out their blood, and that creepy “old guy” who played The Tall Man. On fire as my brain was from that first viewing, I immediately rewound the tape and watched it a second time.

Since that first viewing, I cannot count how many times I have watched PHANTASM. Each time I do, I marvel at what Coscarelli and Scrimm created with The Tall Man. He is the boogeyman without a makeup or a mask to make him frightening. Outside of a suit that fits too tightly, his height, and (in the first film) a bad haircut, there is nothing particularly sinister about the way he looks. But Scrimm connected with the role in a way that is a credit to Coscarelli’s eye for casting.

Never a subtle actor, Scrimm screwed his face up into an exaggerated scowl, frowning like he just stepped in dog crap while squinting one eye as though auditioning to play a pirate in a community theater production. But in the loopy universe that PHANTASM established, Scrimm’s over-the-top performance made perfect sense. I am honestly glad that I did not see PHANTASM as a child. When you are a kid, nothing is more frightening than an adult who does not behave like one. Instead of acting like a professional funeral director, The Tall Man looked and sounded like a snarling dog tugging at the end of its chain.

Despite their low budgets and several years between releases, the PHANTASM franchise has been maybe the most thematically consistent horror film series ever made. There is an integrity to the films that comes from keeping Coscarelli and his core cast together for over thirty years. While some of the elements on the fringes of the films went whacky at times (the HOME ALONE-inspired sequence in PHANTASM III leaps to mind), the dynamic between the main characters stayed grounded. Scrimm, in particular, never winked at the camera. He was the ultimate bad guy. He was the boogeyman who got us at our most vulnerable: when we were already dead. That is a scary thought. That thought makes a frightening villain. Angus Scrimm embodied that villain with sadistic intensity.

R.I.P. Angus. By all accounts, you were a warm and gracious man, but you scared the hell out of me. I have no doubt that would have made you very happy to know.