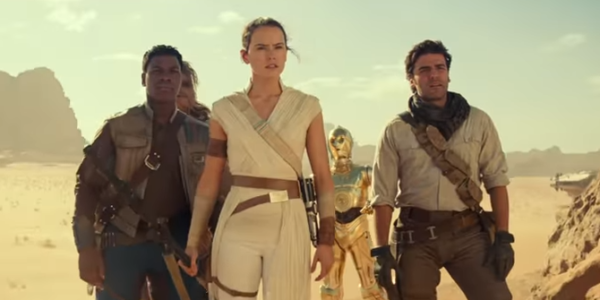 It’s astounding to read at the STAR WARS chapter of Easy Riders, Raging Bulls as the eleventh film in the franchise, THE RISE OF SKYWALKER is hitting theaters. Conceived as a kids movie—director George Lucas once described STAR WARS as WIZARD OF OZ meets WILLY WONKA—the film became a cultural touchstone for generations to come. Of Lucas’ contemporaries, Steven Speilberg was the only one who believed that STAR WARS was going to be a hit. On May 25th, 1977,  STAR WARS almost instantly changed movie culture for better or worse, ushering in a more cheerful style of filmmaking than the cynical films of Brian De Palma and William Friedkin that had dominated cinemas throughout the ‘70s. After twenty years basically in retirement from filmmaking, Lucas got back behind the camera for his prequel trilogy that fell flat for plenty of longtime, older audiences who grew up with Luke, Han, Leia and the gang but spoke to a whole new generation…some who even fell in love with Jar Jar Binks. With THE RISE OF SKYWALKER, J.J. Abrams has the massive task of not only wrapping up the sequel trilogy that began in 2015 with THE FORCE AWAKENS followed by THE LAST JEDI in 2017, (and two spinoffs in ROGUE ONE: A STAR WARS STORY and SOLO: A STAR WARS STORY) but a nine-film saga that is arguably taken more seriously than some actual tax-exempt religions. The film has a lot on its plate and as a result, the final product is sloppy and overstuffed, but when it focuses on smaller moments between the characters, SKYWALKER, comes out on top, overall providing a thrilling if not a completely satisfying conclusion to the tale of the dysfunctional Skywalker clan.

“The dead speak!” announces the opening crawl, suggesting supernatural evil from beyond the grave is afoot in the galaxy. Kylo Ren is on a quest to find the resurrected Emperor Palpatine (last seen being chucked down an exhaust shaft by Darth Vader in 1983’s RETURN OF THE JEDI) who has been pulling the strings from beyond the grave as he has done since 1999’s THE PHANTOM MENACE. Meanwhile, Poe, Finn, and Chewie are on a daring mission to recover information valuable to the Resistance from a spy seated deep within the First Order while Rey continues her Jedi training with General Leia Organa. SKYWALKER puts the gang on an Indiana Jones-style quest to find artifacts that will lead the Resistance to Papatines’s lair and finally put an end to the Empire, the Sith, and The First Order once and for all. However, Palpatine’s cult has been in hiding for over twenty years, building a fleet of Star Destroyers with the ability to destroy a planet (he has a brand) that threatens to bring his evil Empire to power once again. 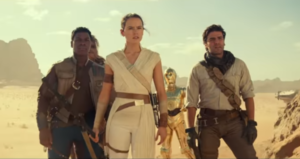 The opening moments of RISE OF SKYWALKER rattles off an overwhelming amount of exposition that’s tempered by seeing the heroic trio that audiences first met six years ago on screen together again after being split up for most of THE LAST JEDI. RISE OF SKYWALKER understands that apart from the impressive special effects and production design, it was the relationships between Luke, Han, and Leia that audiences responded to back in 1977 and a misstep of the previous two films was not giving the trio enough screen time together. The STAR WARS saga has always dealt with themes of friends and family and part of the problems with the cold, unfeeling prequels was that Lucas never really drove home the point that Obi-Wan Kenobi and Anakin Skywalker were good friends the way Han and Luke became. It’s those human moments between Luke and Han, bantering back and forth (usually about the Princess) that efficiently paint these two men as friends. The three friends are on a classic adventure full of close calls and even quicksand and in that quest, essentially an extended high-speed chase similar to MAD MAX: FURY ROAD, is the heart of the movie and it’s unfortunate that it took until the third film of the sequel trilogy to put the three of them on an adventure together. The film comes alive when the ragtag gang of heroes are onscreen together, filling the frame and cracking wise. It is welcome, but unfortunately, the focus on the three heroes detracts from Kylo Ren, the most interesting character in the three-film arc. Adam Driver as Ren was the MVP of LAST JEDI, a tortured soul, aligned with the dark side but constantly being pulled to the light. He’s put on the sidelines for most of the movie, doing more traditional villain stuff. This reviewer was also disappointed that Rose Tico was sidelined, but in a film as loaded as SKYWALKER, putting the focus on the heroic trio was welcome. While Finn and Poe both get moments to shine, Rey gets to step to the forefront of SKYWALKER. At times in the previous films, Rey almost felt like she had a cameo role in her own story and the revelations regarding her family line are underwhelming (and a tad confusing) but her performance makes good on the promise of her character. 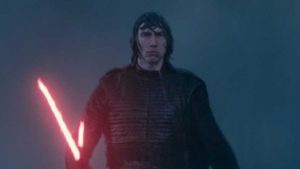 As great as the new cast gets to be this time around, the best moments come from seeing favorite characters back on the big screen. Like Harrison Ford and Mark Hamill before him, Billy Dee Williams lights up the screen whenever he comes around making a terrifically on brand entrance for the charming rogue. His Lando hasn’t missed a beat, still showing up at the last minute to save the day, charming as ever, and delivering a classic line. Anthony Daniels as C-3PO gets to be involved more than he has in years, an integral part of the story, recalling some of the character’s best comic relief moments from the original films. The moments that feature STAR WARS veterans and the new class interacting provide an emotional resonance relating to the intergenerational core of the STAR WARS saga.

In The Making Of The Empire Strikes Back, it’s implied that the 1980 sequel was intended to be sort of a “spooky” movie, and for a series of films that deal with space wizards and a fringe religion, creepy supernatural elements have been absent. The sequences featuring the resurrected Emperor feel like they’re from a gothic Hammer horror flick set in space with moody fog rolling in and lightning striking, the hooded Emperor creeping around his lair in a HELLRAISER-inspired contraption surrounded by hooded cultists. The return of Emperor Palpatine does seem forced, it falls in line with George Lucas’ concept that the films in STAR WARS are intended to rhyme and in the same way AWAKENS rhymes with the 1977 original (and even PHANTOM MENACE) and THE LAST JEDI rhymes with EMPIRE, THE RISE OF SKYWALKER rhymes with SITH and RETURN. To throw away that concept in service of being different for different sake would be a disservice to the saga as a whole. Looking at the STAR WARS films in order from PHANTOM MENACE to SKYWALKER, the specter of Palpatine has loomed over the saga almost as much as C-3PO and R2-D2. The return of Palpatine fully realizes how massive the threat of his Final Order is, giving an actual feeling finality to this chapter in the series.

The sudden appearance of Palpatine in the sequel trilogy’s third chapter is undoubtedly a result of poor planning. It’s unfortunate that Kathleen Kennedy and her team didn’t take a little more time putting THE FORCE AWAKENS into production (and perhaps taken the usual three years between films that George Lucas did with both the original series and the prequels) to hash out a cohesive, three film arc for the characters. Of course, if you think that Lucas honestly had everything all planned out prior to STAR WARS, then I’ve got a bridge I’d like to sell you on Tatooine. As a result of poor planning (and these films are generally still being written in the editing room), SKYWALKER is sloppy, with characters coming and going, moving from planet to planet seemingly at the snap of their fingers. The film feels like it’s playing catch up for the run time, trying to wrap up as many loose ends as possible. There are moments where it’s confusing if Kylo Ren is indeed in the wreckage of Death Star II with Rey or if he is simply one of her Force visions. The action in the film comes by fast and furious, so it’s hard to get stuck on moments like this, simply enjoying the ride. Like RETURN OF THE JEDI in 1983, the film suffers from feeling rushed but there is so much goodwill that it’s easy to give the proceedings a pass and simply enjoy seeing old friends together one last time.

THE RISE OF SKYWALKER builds upon the arcs and themes touched on in THE LAST JEDI bringing deeper meaning to the previous film. A throwaway line even explains why you just can’t do the “Holdo maneuver” every time, similarly to what ROUGE ONE did, explaining why there was an exhaust shaft in the Death Star, addressing the theories of dopes who don’t know how to suspend their disbelief. In the time that has passed between LAST JEDI and SKYWALKER, Finn has grown into an impressive soldier of the Resistance and Poe is still working on himself, trying to become the leader that both Holdo and General Leia know that he can be. Meanwhile, Rey is still unsure of herself as her Jedi training continues and is almost defeated by Kylo Ren in a wonderfully sweaty and nasty lightsaber duel on the wreckage of Death Star II.  If the theme of THE LAST JEDI is that failure is a great teacher, SKYWALKER expands on that showing exactly WHAT failure can teach you.

Audiences lauded THE LAST JEDI for subverting expectations, a notion I never fully agreed with. THE LAST JEDI cribs from EMPIRE and RETURN almost as much as FORCE AWAKENS does the 1977 original. But think of STAR WARS as a rock ‘n’ roll band that’s been playing for forty years. Outside of The Replacements, who wants to be intentionally adversarial with their audience? Cheap Trick has been playing out longer than STAR WARS has been part of the popular culture lexicon and their setlist is comprised of deep cuts, favorites, surprises, album tracks, but most importantly to some: the hits. THE RISE OF SKYWALKER attempts to craft a perfect setlist to cater to everyone who adores STAR WARS (even people who think the prequels are good) and for the most part, it works.

Wrapping up a nine-film franchise is no easy task and while SKYWALKER doesn’t completely stick the landing, it’s not about the end, but the journey. From its first sequel, the STAR WARS franchise, despite what George Lucas might tell you, never knew where it was going to go. It’s been at times infuriating, thrilling, weird, and wild and the latest film fits in alongside as well as any film as fit into the STAR WARS saga. THE RISE OF SKYWALKER is a sloppy and exciting ending to a sloppy and exciting series and while it may not provide a satisfactory conclusion to the saga as a whole, but does nicely wraps things up, delivering some truly emotional moments for the characters that audiences have grown to love over four decades of moviegoing.