Home  ⁄  The Wire  ⁄  [IN THEATERS MEOW] CATS: THE MEOWS THAT ROARED, FLOORED, AND (SOMETIMES) BORED

No, you did not grow up scared of clowns. No, you do not involuntarily wince at the word “moist.” No, you never thought Jimi Hendrix sang, “’Scuse me while I kiss this guy.” And, no, the CATS trailer did not “terrify” you. De-meme your identity and live, please.

The right-on-schedule, repulsively predictable hive-tweet reaction to the CATS teaser only fueled my anticipation for a finished product. Admittedly, my hopes already beamed high for CATS by dint of it being a broad, splashy musical containing broad, splashy Rebel Wilson. Still, Mass Idiot Lockstep Bloviations will only ever ignite my ass-fire, every time.

To wit: any time Groupthink issues a “WORST. MOVIE. EVER” edict, my instinct is to champion their target. I grew up circling any title rated “BOMB” in Leonard Maltin’s annual movie guidebooks and then scoured my local TV schedule each week to hunt them down. That was my film school, and it worked.

Consider, too, some specific masterworks reflexively bemoaned on arrival by Big Stupid Everybody: EXORCIST II: THE HERETIC (1977), SHOWGIRLS (1995), and THE ISLAND OF DR. MOREAU (1996), to name just three favorites. Which do you think is more challenging, more exciting, more rewarding—those films, or whatever topped the box office and/or mainstream critics’ lists of their respective release years?

Time arrives again to bust out Pablo Picasso’s invaluable observation, “The one true enemy of creativity is good taste!” (Although for too long now I’ve wanted to add, “Glad you died before you had to amend that to include ‘… and STAR WARS,’ Pabz”).

In fairness to the general CATS reaction, the trailer—and indeed, I can say now, the whole movie—is bizarre-looking and freakish and garish and off-the-rails/all-over-the-place and bombastically beyond the scope of fanbrat respectability/acceptability. But here’s the thing: those are points of praise.

That CATS ultimately left me wishing, time and again, it would move along from one hyper-repetitious, semi-tuneless introduction of a fresh feline would-be showstopper to the next Rebel Wilson actual showstopper is criticism of the core material far more than its big-screen adaptation.

In fact, director Tom Hooper, a cast that’s committed to the point of risking commitment, and whatever mad scientists rendered the volcanic visual overwhelm of CATS can only be hailed and hosanna’d. My serpentine neon CGI tail doffs my too-tall neon CGI top hat to each and every one of them. Let’s now address the composer, though.

Oddly, given my passion for Andrew Lloyd Webber’s Jesus Christ Superstar, how much I like Evita, and my anywhere, anytime outbursts of “One Night in Bangkok” in full, I never saw a live production of CATS or even listened to the original cast recording all the way through.

“Memory,” the show’s powerhouse heart-ripper and lone radio hit, has spooked and moved me since CATS’ 1982 Broadway premiere. Get to know me and eventually I’ll disclose how horribly I identified with bedraggled outcast Grizabella the Glamour Cat at age 14. Some other time, though.

All this is to say I went into the movie cold regarding the music and found it stunning—although, this time, that’s not a point of praise. In fact, the music is exhausting and formulaic. That’s not what any rational mind would hope for when delighting over Dame Judi Dench in full Cowardly Lion drag.

Specifically, the exhausting formula is this: we  meet a cat, the cat sings a monotonous ode to itself for too long, and then we meet another cat who does the exact same thing, and then it’s time to consider a bathroom break, but you don’t want to miss Rebel Wilson in the event she comes back while you’re out.

So you hold your water and brace for another round of grand-scaled cat dancing whose impact on stage must have been monumental but here is rendered nil by dint of omni-directional computer animation. My instant resistance to that (presently inescapable) assault of electronic blur is akin to why I stopped seeing big action movies—if I can’t tell if it’s a stunt actor or a digital file making the impossible appear to happen, I’m not interested. You may enjoy eyeballing somebody else play a video game; not I.

As a result, CATS is more cartoon than it is cartoonish, and the mesmerizing weirdness of the images doesn’t quite sufficiently alleviate the downside of that equation.

Returning to the music, two peaks of mitigation exist. “Memory” remains irresistible. Jennifer Hudson, as a more dire and hopeless Grizabella than is comfortable to imagine, belts the song several times and each is an oasis amidst the otherwise amorphous soundscape. 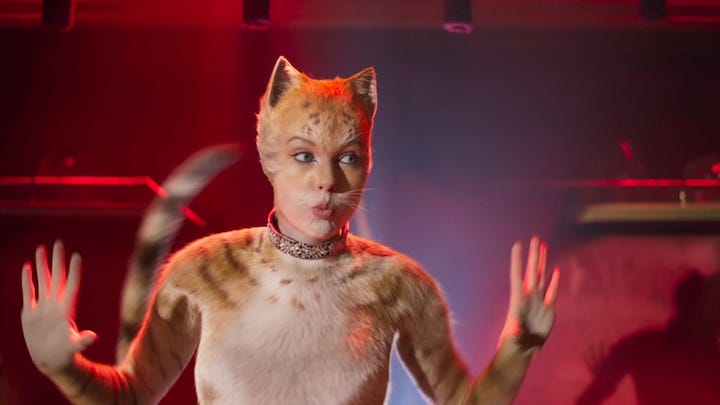 “Beautiful Ghosts” is the other gush of ear-nip. Taylor Swift’s original contribution to the soundtrack also comes up more than once, most powerfully when whiskered newbie Victoria (Francesca Hayward) purrs it in contrast to J-Hud’s crumbling, tear-sopped “Memory.” The song is indeed beautiful and ghostly and if the inflated breast-bumps given to T-Swizz’s Bombalurina character came as part of her pay deal, I applaud their presence.

Admittedly, I came to praise CATS and, ultimately, the movie enables me to do that. It’s a risk that largely fails, but it does so for none of the reasons prescribed by Social Media Nabob Nation—they who are “scared to death” of human faces on MS Paint animal bodies but not the naked Monoculture Megacorporate Brainwash that defines them. That makes CATS and its crazy flare-up of unexpected possibilities a risk worthy of reward. All that and Rebel Wilson, too. 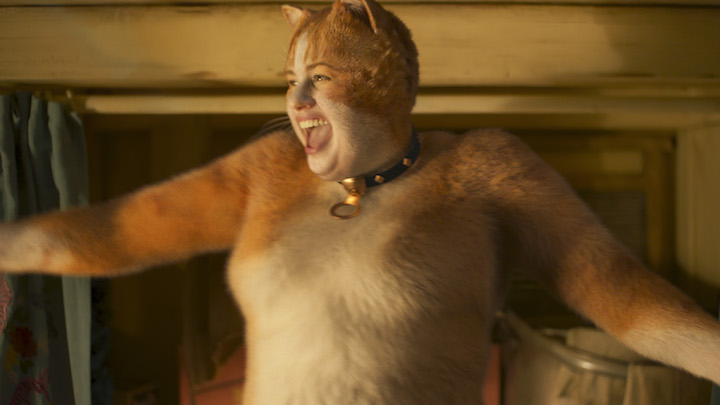