Home  ⁄  The Wire  ⁄  SOLO: A STAR WARS STORY Is The Best STAR WARS Adventure Since The ‘80s & The Most Fun Since The Original

George Lucas’ original STAR WARS was, at its core, throwback cinema. In the same way filmmakers today recreate the style of the films they grew up on, Lucas blended Flash Gordon serials, swashbucklers, and war movies into a game-changing film that became a phenomenon. The ensuing sequels would build upon the fast, fun, exciting—and simple—original, creating a deeper family saga in a galaxy far, far away. With SOLO: A STAR WARS STORY, director Ron Howard and father-and-son scribes Lawrence and Jake Kasdan return to the franchise’s roots, concocting a throwback not to the Hollywood of Errol Flynn, but rather the spaghetti westerns, ultra-cool heist flicks, and ‘80s action spectacles that the older and younger Kasdans grew up with, respectively. While the film does explore themes of loyalty and honor amongst thieves, SOLO never gets too bogged down in soapy drama and instead delivers a pulpy, slam-bang action flick reminiscent of Brian Daly’s Han Solo novels that’s the most fun you’ll have this summer.

As far as character development goes, SOLO has it much easier than ROGUE ONE or THE FORCE AWAKENS. Han, Lando, and Chewie are characters who audiences have loved for more than three decades, and—be they canon or not—have countless stories from comic books and novels to help craft these characters and their personalities. The film is very much an origin story, but its breakneck pace keeps SOLO from ever just feeling like a collection of exposition. Opening with a not one, but two high-speed car chases, SOLO introduces a younger, far less cynical Han Solo (Alden Ehrenreich) and his lady friend Qi’ra (Emilia Clarke) running scams on Corellia. (With its industrial feel and rain-soaked streets, the planet is reminiscent of BLADE RUNNER or Walter Hill’s STREETS OF FIRE.) From the get-go, SOLO truly feels different than any other films in the STAR WARS franchise: ROGUE ONE promised a look at a different section of the STAR WARS galaxy, but in the end it was still the Rebels versus the Empire. SOLO makes good on that promise, showcasing the galaxy’s criminal underworld and expertly utilizing the STAR WARS franchise—its worlds, characters, and overall delightfulness—to tell a story that is quite different, while still feeling familiar.

After being separated from his best girl, Han attempts to join the Imperial Navy, and winds up as an infantryman. It’s here where he meets Tobias Beckett (Woody Harrelson) and his crew—a disparate gang of thieves looking to make one big score—as well as his future partner in crime, Chewbacca. Chewbacca and Han meet under less than desirable circumstances, chained together like a sci-fi DEFIANT ONES . From there, Chewy and Han join the team (which includes a slick-talking monkey man), they engage in a great train robbery (in space!), Han plays a game of cards with Lando Calrissian (Donald Glover), and meets his one true love: the Millennium Falcon. It’s unfair to call any of this fan service, because in this kind of movie, this is how these things are supposed to play out. SOLO is a gangbusters exercise in genre filmmaking, only the genre isn’t a space opera, but a crime drama.

The film is a throwback to classic action-adventure cinema. The works of Michael Mann and Walter Hill are in SOLO’s DNA, which is one part heist film, and one part Western, and all gels together thanks to a delightfully funny script and relatively light touch from director Ron Howard. SOLO is Lawrence Kasdan’s swan song from the STAR WARS series,  and it’s an appropriate one: He’s long stated that Han Solo is his favorite character, having truly fleshed out the charming rogue in his draft of THE EMPIRE STRIKES BACK, and there is a sense that he not only understands the character, but knows exactly what audiences want to see. Known for his quick, old-Hollywood style dialogue and his love of Westerns, Kasdan (and son) have crafted a delightful and thrilling tale that brings romance back to the franchise—Clarke and Ehrenreich’s chemistry rivals Carrie Fisher and Harrison Ford’s—as well as some welcome sex appeal in Donald Glover’s Lando Calrissian. It’s also the funniest STAR WARS movie to date. LAST JEDI swung for the fences in terms of comedy, which worked more often than it didn’t, but SOLO knocks the jokes out of the park. It’s almost two and a half hours of the “we’re all fine here now” bit from the original film, but the character and tone simply lend themselves to that style of humor. 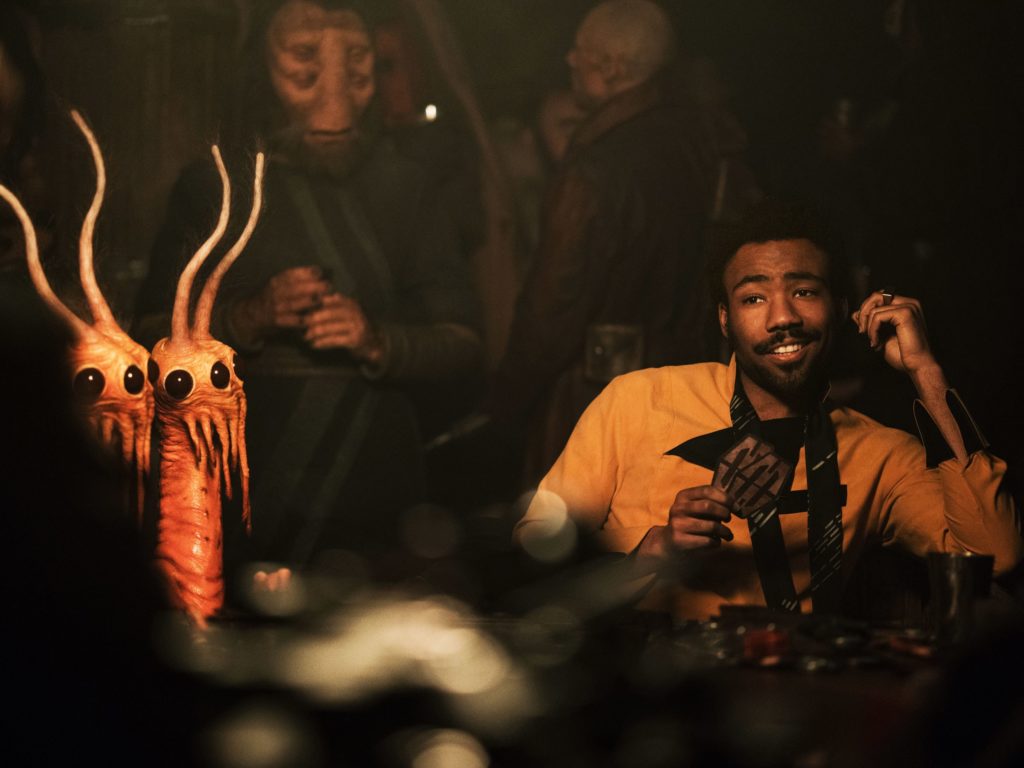 In a way, SOLO is the STAR WARS sequel that audiences in 1980 would have expected instead of EMPIRE STRIKES BACK, doubling down on the Saturday morning serial vibe of the original film. This is a smaller scale STAR WARS film than audiences are used to seeing, but the lower stakes are welcome in a series that perpetually has the fate of the galaxy in peril. The characters in the film are less finely drawn archetypes, similar to the original film. A true ensemble piece, everyone gets a chance to shine, be it with comedy, villainous acts, or foolish heroics. Nobody really steals the show—Aldenreich forgoes doing a Ford impression, opting instead to capture the flyboy essence of the character, and Glover has a blast channeling that suave charm of early ‘80s Billy Dee Williams—but A-list character actor Harrelson and Paul Bettany as crime boss Dryden Voss come pretty close. Harrelson gets to deliver all the great Mann/Hill inspired speeches about loyalty and honor, while twirling twin pistols like a space age Doc Holiday. Bettany feels like he was pulled out of a Shane Black flick. He’s all sleazy swagger in an outfit that slickly combines the gangster-style suit of classic crime films and another great STAR WARS cape (and this film is chock full of great capes). He saunters around his penthouse-style office, sipping on a cocktail, and eating fancy food surrounded by his henchmen delivering dialogue seemingly cribbed from a Cannon Films villain. He’s a villain unlike audiences have seen in a STAR WARS film: he’s not Imperial, he’s not a slug, he’s an HBO direct-to-cable crime lord in a big-budget summer blockbuster. And it’s just what the film (and the franchise) needed. 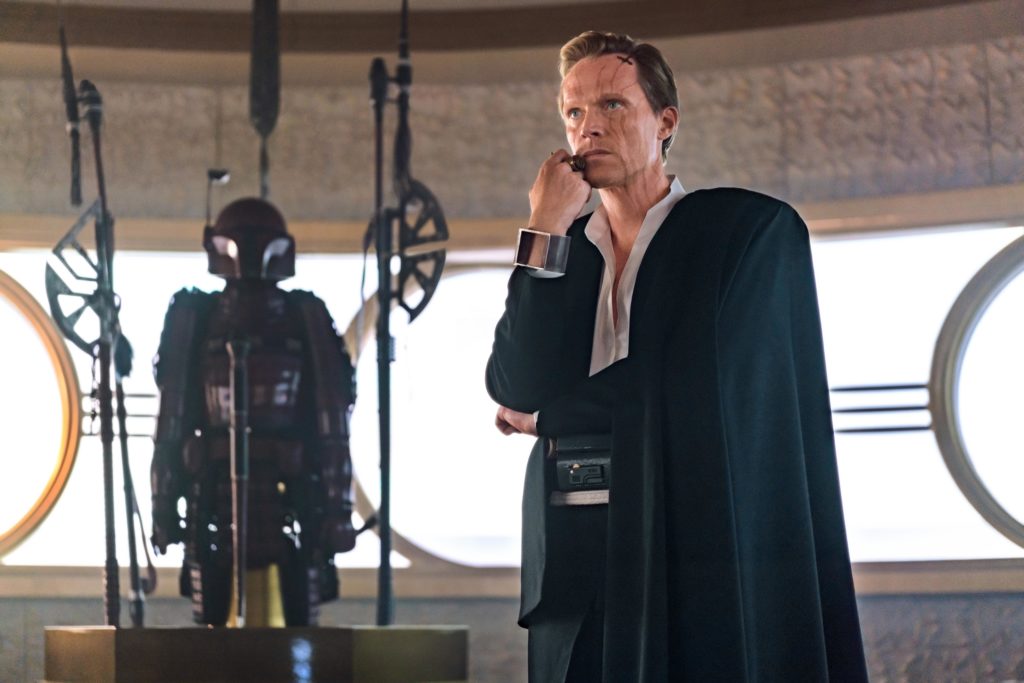 In a film loaded with action set pieces, a positively thrilling train robbery that occurs relatively early on is arguably the film’s centerpiece. Howard displays a sense of time and place for all of the action—which includes hover bikes and a monkey flying a spaceship—that never confuses the audience. Reminiscent of the original film’s trench run, it’s a fine piece of direction and editing that works because even though you just met some of them, you care about the characters and their heist. Shot in Italy’s snow-covered Dolomite Mountains, Howard’s confident direction makes it come alive.

The team really nailed the alien designs in this one. All of the aliens and creatures in SOLO have that great, hodgepodge, “put together from spare parts” quality of the original film’s cantina sequence, and with the way the film moves from sleazy planet to sleazy planet, at times SOLO feels like a feature length version of the iconic bar scene. There are so many moments of inspired weirdness in SOLO, including a scene where Clarke and L3-37 (Phoebe Waller-Bridge) discuss the sex lives of droids and a prison break that recalls INDIANA JONES AND THE TEMPLE OF DOOM. It all looks and sounds great, too, thanks to cinematographer Bradford Young and composer John Powell, who has given us a truly memorable STAR WARS score that features brand new themes that recall that sense of swashbuckle from the original films and incorporate those classic notes (including a personal favorite, “The Asteroid Field”).

Ron Howard outdid himself on this one, recapturing that intangible STAR WARS spirit with a film that’s beautifully grimy and an absolute blast from start to finish. Even with enough tasteful nods to the saga as a whole—and one huge prequel reveal that left this prequel denier cold, but will send fanboys and girls into a tizzy—the film is very much a standalone adventure in the style of the old expanded universe. SOLO is exhausting, but in the best possible way (it’s a wild ride, and they cram so much into it) and really delivers. Roger Corman protégés just know how to get things done. SOLO: A STAR WARS STORY is where the fun begins.