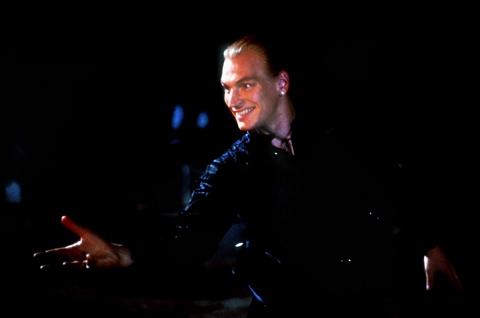 So, for those who don’t know, I used to LARP (Live Action Role-Play). One could argue that this was a good way of working on improvisational acting skills. I could say that this was a fairly inexpensive form of entertainment, too. But I’ll be honest; I got into LARPing because I felt it was a good place to meet guys. Let me back this up by saying that I attended an arts school, and there were something of seven girls to every one guy. Competition for male attention was stiff, and being the weird goth chick at school, I wasn’t even in the running. So when I found ALL these guys gaming, I slapped a pair of fangs in my face, made a character (a Tremere, for enquiring minds) and got my game on. The gentleman who had both introduced me to this world, and as well did my fangs (which I still have and wear) also had a Tremere character named Bane. This character was based on Julian Sands’ character from WARLOCK. He was so convincing in character that when I actually SAW WARLOCK it was super creepy, like Mr.Dark totally got robbed of that role. But I digress.

The Warlock, on trial for satanic crimes in the 1691 in Boston is granted a stay from the executioner’s hand and propelled through time and space to, where else, Los Angeles in the late 1980s. Because if I’m the lord and master of all darkness, I have 298 years and a change of postal code to wait around for my minion to mess around with humanity and bring about the end of the world. Satan’s got more patience than me, because between Twitter and Vine, my attention span is severely limited these days. In our contemporary Los Angeles he is taken in by kindly Kassandra (Singer) and her roommate. The Warlock doesn’t waste any time and starts offing people and bewitching them all around. A witch-hunter from the past also passes through time (apparently Satan is not the best at remembering to close the door, which might explain why there are so many portals in lore). 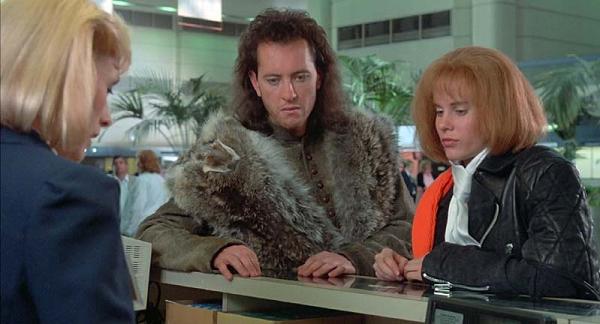 This has a mix of really great high fantasy ’80s feel combined with some of the very black theological horror like THE OMEN, and as well as some impressive visuals for it’s time. It was also to see Singer in a role that wasn’t FOOTLOOSE, which I feel is the only thing I’ve seen her in, and she holds her own well with Sands. Grossing $9,094,451, this was Trimark’s biggest grocer until EVE’S BAYOU, and saw two sequels. I did NOT see two sequels, since the Britney-lookalike of the third was a major put off. But if she’s a bride of Satan it would explain ‘Hit Me Baby One More Time” and it’s ability to have you singing it for days. Still, this first film is worth checking out, and has a respectable amount of effects well done and a fun plot.