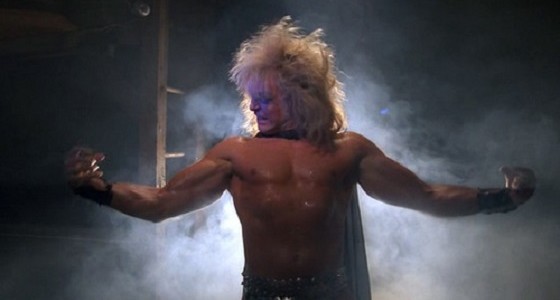 A special rock ‘n’ roll contribution from the greatest singer from your favorite band, I Love Rich…

I have to say that I am, un-ironically, a big fan of Jon-Mikael Thor. I like my metal ridiculously over the top and absurd, and Thor’s music hits that bullseye for me. He’s certainly had a few misses among his hits, but he’s got a few dozen great tunes and his live shows are spectacular. Classic old school Thor bent steel, performed feats of strength, and this hot water bottle trick!

As he’s into his 60’s now, he doesn’t do as much of that stuff, but he still puts on a great show. Sure, it’s something you get into for the shits and giggles of it, but Thor’s catchy tunes and power as a musical act can’t be denied.

ROCK ‘N’ ROLL NIGHTMARE (which is inexplicably also known as EDGE OF HELL) is Thor’s attempt at a horror movie, though I doubt anyone involved thought people would be scared by this nonsense. This is a low budget film (It was shot for $50,000 in 1987) and the cost is visible: the little monsters sneaking up on them look ridiculous and the movie never really moves off the farm. This film is also incredibly padded, and the first version of the film was about 10 minutes short for film distribution. There’s lots of unnecessarily long shots and a few scenes clearly could have been cut down. 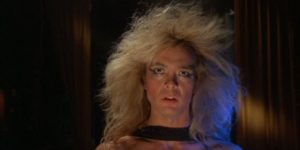 Thor basically is playing himself, but his band in the movie is called Triton. Thor and his band have rented out a recording studio in a remote farm, and they have a month to come up with “ten minutes of good material” to keep their record company happy. Which seems like any band could do this relatively easily, but then again, there are plenty of bands that don’t have even three minutes of good material. Not everyone is a musical genius like me.

Thor had released eight albums at this point in his career, so he clearly had been in an actual recording studio before. However,  you wouldn’t know it from watching this movie. The band sets up like they’re playing live, they’re wearing their stage clothes and preening around even though they are in a studio even though there is no audience. Thor’s the only dude who actually looks like a cool rocker dude though; the other dudes look like typical ’80s schmucks. Triton is like if Bret Michaels took a shitload of steroids and sang for Mister Mister. No one involved in the recording is wearing headphones, though to be fair the producer/engineer has a pair of them in his hands while he’s rocking out and not paying attention to the mix. The girlfriends are rocking out and watching the band play, and one of them is knitting while she does it…sure, why not? 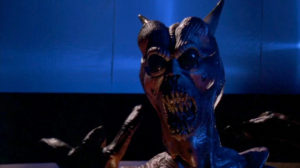 It eventually becomes clear that trouble is afoot. One by one, little monster dudes appear from the shadows and the band members start disappearing. When some groupies show up to hang with the boys in the band, they disappear too. Eventually Thor is left alone to confront the head demon…or whatever the hell it was.

The film really doesn’t explain itself or make a lot of sense.

The end of the film is nuts. It’s kind of an insult to anyone who worked on it or was trying to follow the plot for the first hour of the film. I’m not going to ruin it for you and spoil it. I’ll just tell you that sitting through some of the slower parts of the film is worth it, because ROCK ‘N’ ROLL NIGHTMARE’s finale is Thor wearing a speedo fighting a giant plastic Satan doll who’s throwing purple nerf starfish at him. The ending is glorious heavy metal action. 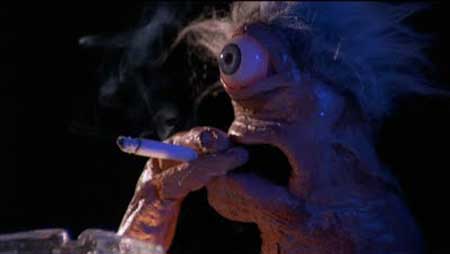 In its way, ROCK ‘N’ ROLL NIGHTMARE really is the perfect star vehicle for Thor. It’s cheesy and cheaply done, but so is Thor. Part of the charm of Thor’s music is while it’s metal, the playing isn’t super technical like a lot of the other early 80s metal bands. For lack of a better term, his music is almost punk rock, but not necessarily because he wanted it to be, but because of his bands lack of musical chops. The film is sort of the same thing. Sure, it could have looked better had the Satan monster at the end looked scary and had the little monsters attacking them had not look liked muppet penises. But this movie is fun because it’s one of the cheesiest 80’s B-movies you’re ever going to see. The only real downer is that there isn’t more of Thor’s music in the film.