Home  ⁄  The Wire  ⁄  Danzig’s VEROTIKA Is The Singular Vision Of An Artist, Warts & All

Danzig is for the children…or at least the 16 year old boy in all of us.

It feels a little disingenuous reviewing VEROTIKA. So far the film has only screened last night as part of this year’s Cinepocalypse Genre Film Festival at Chicago’s Music Box Theater. Danzig himself was on hand to intro and do a Q&A after the fact. It was a magical evening for genre film fans and the punk rock Man in Black himself. I also grew up a huge Misfits/Samhain/Danzig fan. The first time I ever played bass in front of a crowd of people the song was “Last Caress” and it was my 16th birthday. That kid would have loved VEROTIKA. That kid would have dubbed a copy from Blockbuster and made each and every one of his friends sit down and watch it. That kid found VEROTIKA to be entertaining and inspiring and exactly what you would have expected from Glenn Danzig. Part of me feels that at this point in the narrative I should segue into the fact that it’s been 20 years and that kid (and by extension the entire world) has moved on…

But no, I don’t believe I will. Because there are some things in this world that are untouched by time. Glenn Danzig is one of those things. VEROTIKA is a testament to that fact. 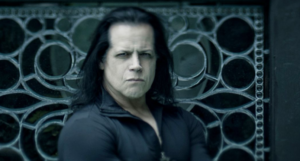 The film itself is an anthology consisting of three stories of the macabre. Each feature beautiful female antagonists, plenty of bare breasts, gallo-esque lighting, really awesome practical effects, and an atheistic sense and overall mentality with two feet firmly planted in another time.

Danzig acted as writer, director, composer, and co-director of photography on the film. It’s safe to say he had a hand in the editing too as some of the choices made really shape the experience of the film. Lots of long takes, lots of slow dissolves to black, and then, even more long takes. It’s hard to say if these were stylistic choices or decisions made to pad the film’s running time. Either way they definitely give VEROTIKA a unique feel that added to the bizarre nature of the film. As Danzig himself said last night “This ain’t no Hollywood bullshit” and never is that more apparent than the unconventional way the film was shot or assembled. Make no mistake about it; VEROTIKA is definitely it’s own thing.

And in so many ways, that’s what makes it a beautiful thing. VEROTIKA truly feels like the singular vision of an artist, warts and all. The nudity, the blood, Danzig’s overwhelmingly powerful “male gaze” and his choice of color palette…you know they’ve been downloaded directly from the mind of this man and transferred onto screen. Sometimes it’s a bit of a mess, but this is Danzig’s first film, and hopefully not his last. It’s not that Danzig is doing something that’s never been done before, it’s that he’s doing something that no one is doing in 2019. The ridiculous amount of nudity alone (fake tits, SO many fake tits)…one frame of VEROTIKA contains more nudity than the entire CONJURING series. There is no A23 slow burn here, within the first 2 minutes of the film you see a woman’s eyes gouged out with practical effects, within the first ten minutes a woman cries tears from her breasts (?!) that turn a household spider into a french speaking, neck breaking, anal rape threatening demon…also done with glorious practical effects.

If nothing else, VEROTIKA was genuinely exciting because the audience goer truly did not know what the fuck was going to happen next.

Gratuitous female nudity, archaic (what some might call) misogynistic uses of the English language, questionable choices in editing. Some audiences might find this…problematic. It’ll be interesting to see what happens when a larger audience gets a hold of the film. Last night the audience seemed decidedly split. There were a group of dudes sitting next to me that seemed to groan at every “Bitch” and “Cunt” used in the film, but on the other hand there seemed to be several more women in Misfits shirts that didn’t seem to mind in the slightest. One female audience goer even choose to proclaim during the Q&A “We love you Glenn” so I’ll assume the overtly 16 year old boy nature of the film didn’t entirely alienate it’s female audience. Make no mistake though, everyone had fun. Everyone laughed and cheered. It’s too easy to write  VEROTIKA off as the next THE ROOM. Glenn Danzig is not Tommy Wiseau. Glenn didn’t have Tommy’s money and Tommy doesn’t have Glenn’s artistry. It’ll be a true shame if audiences treat the films the same way.

But..having that said. In a certain light and this one’s for the posters…

VEROTIKA  is the best horror movie I’ve seen in the theaters this year.

(Sorry Glenn, but THE PERFECTION was pretty fucking dope)