Tim Burton’s THE NIGHTMARE BEFORE CHRISTMAS is all about boundaries—blurring them, breaking them and knowing when to respect them. Directed by Henry Selick and debuting just as animated films were finding crossover success, it defies genre and demographics. It’s not a kid’s movie, and it’s not an adult movie. It’s not strictly a Christmas movie, nor is it a Halloween movie (Selick begs to differ, but it’s out of his hands at this point). It blends classic spooky aesthetic—skeletons, witches, ghosts, and goblins—with a surreal yet approachable Burtonian spin, and all with a snazzy Danny Elfman score. And this balance between defying and respecting boundaries is at the heart of this musical’s plot, too.

If you’ve never seen the movie—I hadn’t, until receiving this assignment—or if you need a reminder, NIGHTMARE BEFORE CHRISTMAS is about Jack Skellington, The Pumpkin King of Halloween Town, and his quest for new experiences. He and his crew have just come off of another successfully scary Alls Hallow Eve, but he’s still filled with ennui. 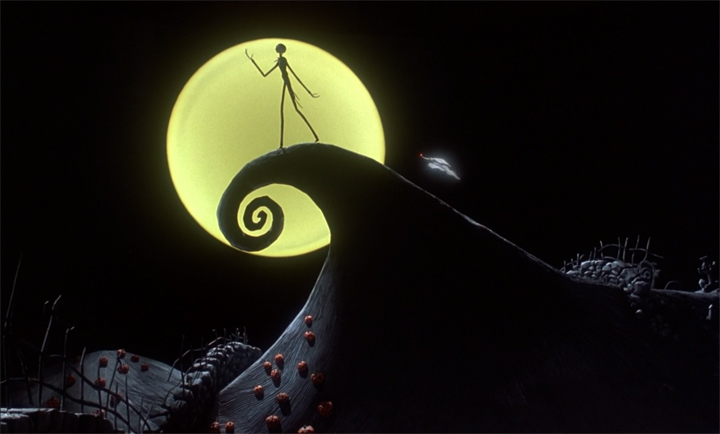 Producing Halloween’s fun, and he’s the best in the business, for sure but Jack wants more. As Jack/Danny Elfman sings in the track “Jack’s Lament:”

…Year after year, it’s the same routine
And I grow so weary of the sound of screams
And I, Jack, the Pumpkin King
Have grown so tired of the same old thing.

In other words, Jack wants to put his personal touch on other things aside from Halloween. (Yes, Danny Elfman was the singing voice for Jack while FRIGHT NIGHT, CHILD’S PLAY (1988), and BORDELLO OF BLOOD alum Chris Sarandon provided his speaking voice).

Then, on a long, skull-clearing walk, Jack stumbles upon the portals to other holidays — Easter, Thanksgiving, Valentine’s Day, and, yes, Christmas. Sucked through the X-Mas portal, Jack has an uncanny experience: elves and gifts and trees alit, and, yes, there’s snow adrift and old Saint Nick, aka Sandy Claws. As confused as he is by the Christmas cheer, Jack’s also charmed. As he sings in the appropriately named track “What’s This?”:

And soon the skeleton’s filled with Christmas spirit:

I can’t believe my eyes
And in my bones, I feel the warmth
That’s coming from inside.

But soon this intrigue soon becomes obsession, and as this obsession builds, so does Jack’s self-deluded insistence that he can — nay should — put his own spooky spin on Christmas.

…There’s no reason I can find
I couldn’t handle Christmas time
I bet I could improve it too
And that’s exactly what I’ll do.

In Jack’s ego-driven mind, he believes he can take this preexisting culture and make it better.

Thus, Jack enlists all of Halloween Town to kidnap Sandy Claws and take over Christmas — and they’re all about it. All except for Sally—a sensible female Frankenstein’s monster trying to escape her controlling creator (and voiced by Canadian national treasure/gift to all of mankind, Catherine O’Hara), she has a premonition of Jack’s plan going askew.* But, alas, her efforts to stop him are in vain, and Jack’s mission gets off the ground, thanks to some zombie reindeer and his dead dog, who happens to have a nose much like Rudolph’s. 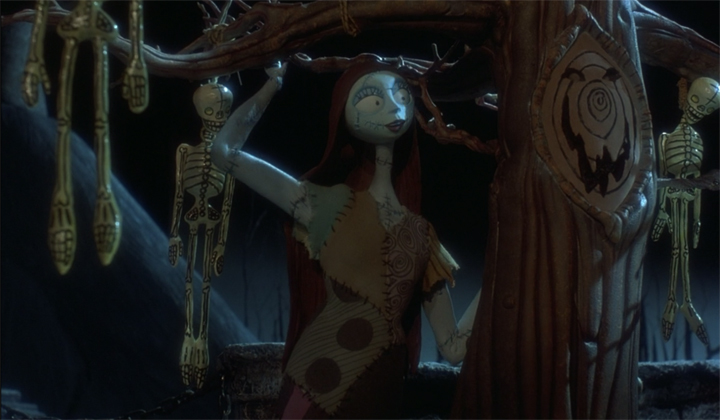 Jack’s plan to spookify Christmas goes off as you’d expect — poorly. After all, not too many kids want shrunken heads and monsters under the tree, and adults were equally unamused: they scramble the military to shoot the skeletal interloper out of the sky. 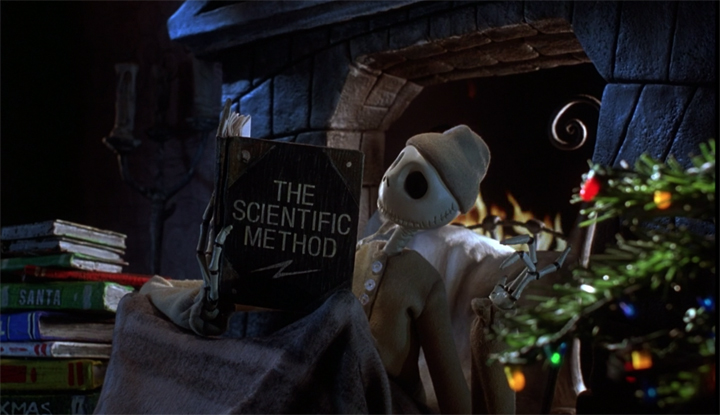 Though at first Jack’s convinced they’re celebrating his efforts—completely consumed by his ego, he declares, “They’re thanking us for doing such a good job.” He realizes his mistake once he’s blasted to smithereens. Falling to earth, literally and figuratively, Jack comes to his senses—he’s not Sandy Claws; he’s Jack Skellington, and he’s the best Halloween man around.

That’s right, I am the Pumpkin King, ha, ha, ha
And I just can’t wait until next Halloween
‘Cause I’ve got some new ideas
that will really make them scream!

Back to his old self, Jack rushes home to free Sandy/Santa, who in turn works at super-sonic speed to salvage Christmas, replacing Jack’s monsters with merrier amusements. (Oh, please, don’t gripe about spoilers for 1993’s NIGHTMARE BEFORE CHRISTMAS, or any Christmas movie; obviously Santa saves Christmas.) 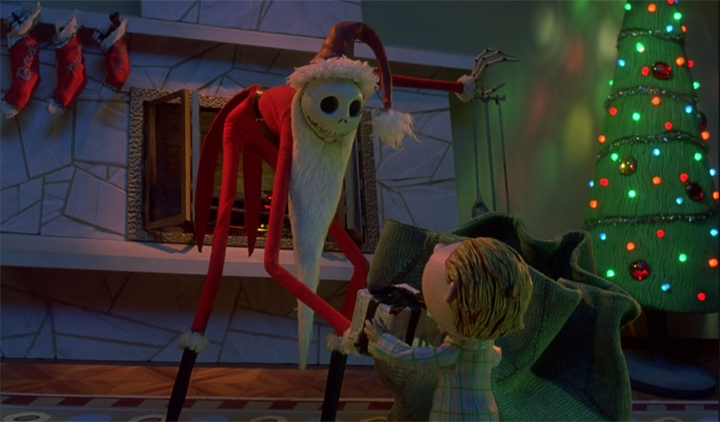 With this experience under his Santa suit’s belt, and with Sally’s assist, Jack learns to appreciate who he is and his special gifts. He can’t be someone else. He can only be himself, and the world’s better for it. That’s the primary message in this flick, the one that’s meant for kids. 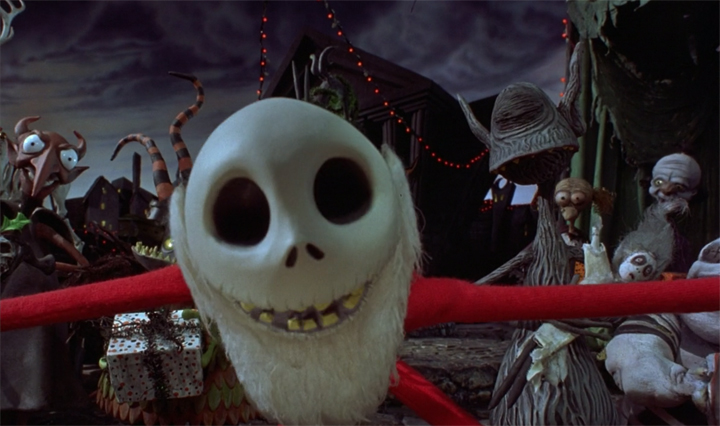 The second, more adult message is that ego-driven culture appropriation leads us to nightmarish places. Jack believes he can improve on someone else’s tradition but becomes a megalomaniac in the process and almost destroys the very thing he admires. Pretty scary stuff. 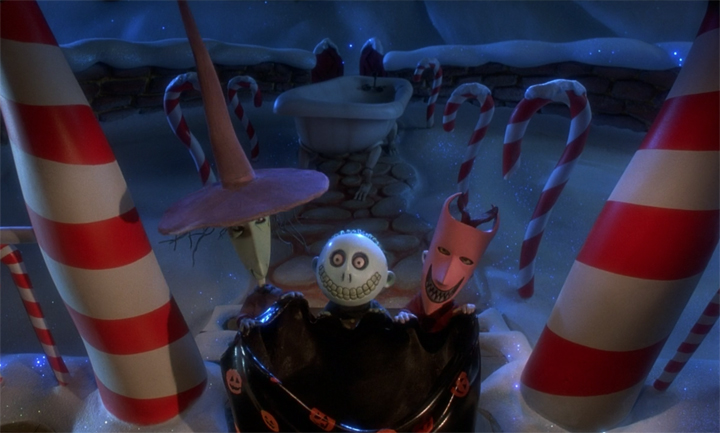 NIGHTMARE BEFORE CHRISTMAS seems to be saying that rather than trying to co-opt or dominate other cultures, we should embrace them authentically, and the filmmakers drive this lesson home at the very end of the movie, when Santa makes one final swing over Halloween Town, delivering snow and Christmas mirth to the monster masses. Though the ghouls and goblins are at first put off (“What’s this?” they reprise), all of Halloween Town learns to love this new treat, and are better beasts for it, showing that cultural exchange improves societies—so long as it’s given, not taken.

*Special Note: Sally’s subplot in NIGHTMARE BEFORE CHRISTMAS revolves around her trying to escape her controlling, patronizing creator (William Hickey, TALES FROM THE DARKSIDE: THE MOVIE). Seeing this narrative element here, especially after SLUMBER PARTY MASSACRE II, it occurred to me how many movies have some dickhead, woman-disrespecting dude as a villain, yet there are still so many dickhead, woman-disrespecting dudes in the real world. You’d think all this exposure to dickhead villains would teach real life dickheads they should be more heroic and treat women well. This special note would also make a good argument against people who think movie violence leads to gun violence. Just saying. 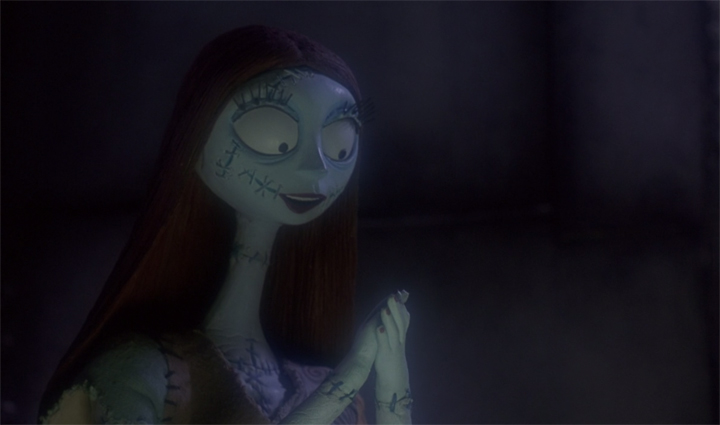 Andrew Belonsky
A writer with 15 years of professional experience, Andrew Belonsky has covered politics, art, and culture for a plethora of publications, including The New York Times, The Daily Beast, The Millions, and many others, high and low alike. He also wrote a cultural history of the log cabin in America and maintains a personal website, In Case You're Interested.

Regardless of what he writes about or for whom, he traces his love of words back to one source: comic books. Also, he firmly believes JoBeth Williams deserves a retroactive Best Actress Oscar for POLTERGEIST.