An undeniable fact is that no rock ‘n’ roll band has ever been better then KISS between 1974-1978. Early KISS is absolutely perfect—the songs, their act, just everything about them. They were the best live band on the planet, and every record up until “Love Gun” is a stone-cold classic that can’t be fucked with. Now, there are plausible enough arguments that other bands (Cheap Trick, Turbonegro, or my band I Love Rich) were as good as they were. But no one has been better than KISS. I don’t understand rock and roll fans who don’t like KISS. Honestly, if you’re not down with classic-era KISS, I’m not sure you should tell people that you like rock ‘n’ roll. 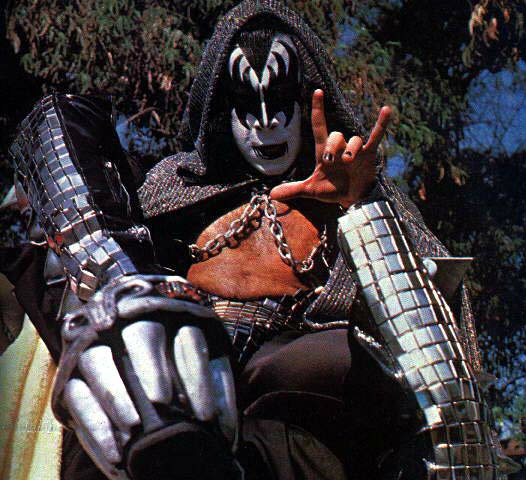 1978 is when things start to get shaky. There’s plenty of amazing stuff after that, but there’s no doubt KISS made lots of questionable decisions post-1978. Some of those choices (the disco songs, ditching the make-up and morphing into one of the better hair-metal bands in the ’80s) kinda/sorta worked out. However some of those decisions were out and out insane, like KISS releasing 4 separate solo albums on the same day, 1981’s disastrous prog-rock concept album “Music From the Elder” and most notably, deciding to make a made-for-TV movie with Hanna-Barbera (a production company famous for cartoons like Scooby-Doo), KISS MEETS THE PHANTOM OF THE PARK.

Some of you might be too young to remember made-for-TV movies from the ’70s and ’80s, but they were always cheaply made, family friendly affairs that passed the time when there were only like five television channels. There are a few exceptions, but by and large these movies were boring and pretty much sucked. KISS MEETS THE PHANTOM OF THE PARK is a little different in that since it featured KISS (one of the biggest bands in the world at the time) it was kind of expensive to produce. 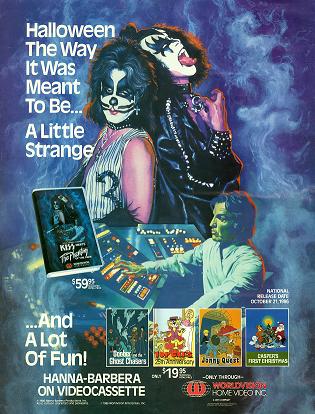 So, what is this movie about? There’s an amusement park, and KISS have a concert planned there. This angers the scientist/engineer dude who builds all the rides and attractions, so he builds an evil army of robots and cyborgs to destroy KISS and the amusement park, as any reasonable man of science would do in this situation. It’s about as thought out as the average episode of Scooby-Doo. The members of KISS also have superpowers, and mystical talismans that provide them.  They can fly, they can teleport, they have shitty looking lasers that come out of their eyes, all sorts of powers that seem to come and go for no apparent reason.

There’s really no way around it, this is a movie that you watch for shits and giggles as a “bad movie” (or as a piece of KISSTORY as they say). I am something of a contrarian and would love to tell you that if you can get past the cheap special effects there’s a real interesting sci-fi story being told here, but that’s ridiculous. KISS MEETS THE PHANTOM OF THE PARK is one of the biggest blunders in rock ‘n’ roll history. For one thing, it takes forever to get moving. KISS is around for an opening scene as the credits roll, but then don’t appear in the film for another 40 minutes or so. Cheap action and horror films often kill some time before shit gets rolling, but KISS MEETS THE PHANTOM OF THE PARK is a champion at this. Off the top of my head, the only film comparable to this would be FRIDAY THE 13th PART VIII: JASON TAKES MANHATTAN, which of course takes around 70 minutes to actually get to New York City. 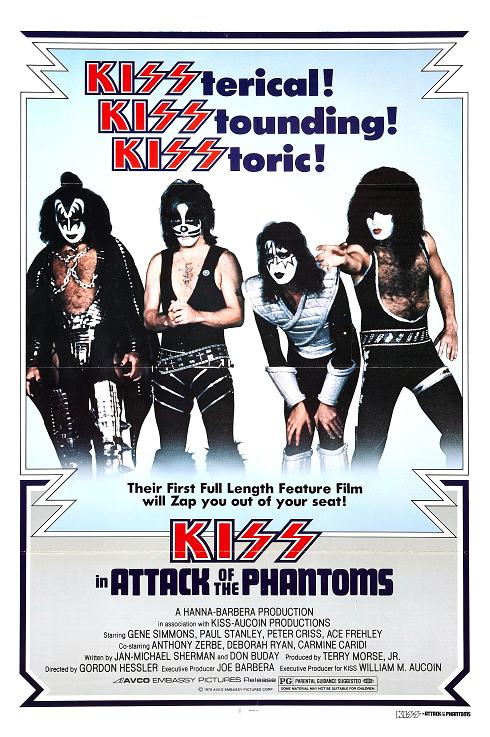 Another thing—KISS didn’t put any effort into learning how to act, which is kind of surprising since everyone except Ace went on to do some acting later in life. Paul Stanley has said on many occasions no one read the script before the shoot. Someone off-camera would shout their lines to them before film started rolling, and if they could repeat their dialogue without fucking it up, that was a take. This film had a pretty big budget for a TV movie (it cost well over $3 million to make) but it has a ridiculously low standard of acting, even by B-movie/rock ‘n’ roll movie standards. There’s other hilarious bloopers too, the stunt doubles are super obvious (Ace’s stand-in was a black dude, which is great, but Ace is a white dude and it’s supposed to be him) and Peter didn’t show up for voiceovers, so it’s some voice actor doing his lines.

The fact that KISS isn’t any good at acting is made even more obvious since Hanna Barbara hired some actual professional actors to be in the film, as studios with large checkbooks often do. You might recognize Anthony Zerbe from COOL HAND LUKE and one of my favorite “oh that dude” actors Brion James from 48 HRS. and TANGO AND CASH. One of the cops in the film is played by Carmine Caridi, who was in a bunch of great films including THE GODFATHER PART II, but he’s mainly noteworthy to me because he was in TOP DOG. It’s quite the acting resume to have been in a family film where Chuck Norris teams up with a mangy mutt to stop a major terrorist act from white supremacists on Hitler’s birthday and not have that be the most ridiculous film on your resume. There should be a hall of fame for this kind of thing. Anyway, no one involved in the film does a particularly good job, but they all seem like Oscar winners compared to how half-assed the members of KISS deliver their lines. 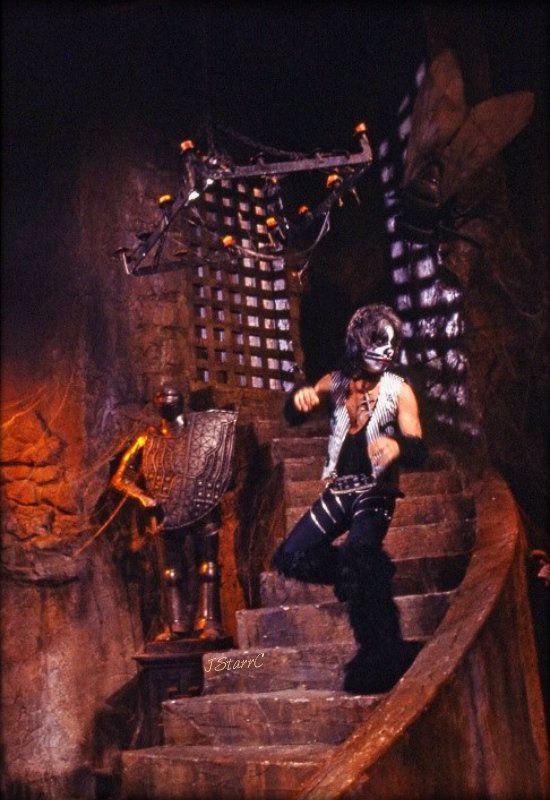 It’s a blast watching KISS in this cheap-looking TV movie, but the highlights of the film are the live clips, highlighted by this smoking performance of “I Stole Your Love” and the utterly ridiculous finale. The evil scientist/engineer kidnaps KISS, and sends a fake robot KISS out to play the show. To be honest, it might technically be a cyborg KISS. It seems to me this dude was seriously underemployed working at some crappy amusement park when he had this cutting-edge technology and could have like, ran NASA or something. But things were different in Jimmy Carter’s America, I suppose.

The fake KISS opens their show with a song called “Rip and Destroy,” which is their classic tune “Hotter Than Hell” with different lyrics. At first the crowd is pissed at them, but then they realize that they can, you know, actually rip and destroy things, and shit starts to get violent. But before things get too out of hand, the real KISS escape, and fly in and save the day. It’s gloriously cheesy and ludicrous. It’s for sure one of the great action finales in the history of film, and it’s all topped off by a rocking performance from the real KISS. Pretty great way to end the film, really. 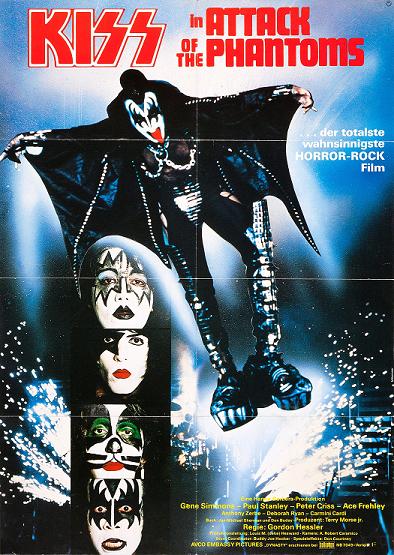 The dudes in KISS (especially Gene and Paul) fucking hated this movie for a few decades. They seem to have lightened up about it these days, but for the longest time people couldn’t even mention it around them. Can’t say that I blame them for that to be honest. They got involved with KISS MEETS THE PHANTOM OF THE PARK because they were told it was going to be a cross between STAR WARS and A HARD DAY’S NIGHT. Even as someone who would question the cinematic quality of A HARD DAY’S NIGHT, it’s painfully obvious that KISS thought they were going to do something kind of cool here. They didn’t get involved in this fiasco to make a jokey kids movie with Hanna–Barbera and were reasonably mortified with the results. When it’s all said and done though, that’s probably why the film is fun of for the rest of us.