Music plays many roles in SLUMBER PARTY MASSACRE II, the most obvious of which is as a lure for the burgeoning MTV generation. A 1987 horror movie couldn’t get a more of-that-moment murder weapon than a drill-tipped electric guitar, after all, and the music video-esque interludes reek of gimmick. But beneath the market-driven beats lie more subtle notes, and no shortage of symbolism: there’s music as therapy; there are musical representations of female empowerment and its direct rival, toxic masculinity; and there’s even a cameo by “music as metaphor for generational divides.” Yes, there’s a lot to dissect here, so let’s get to it! 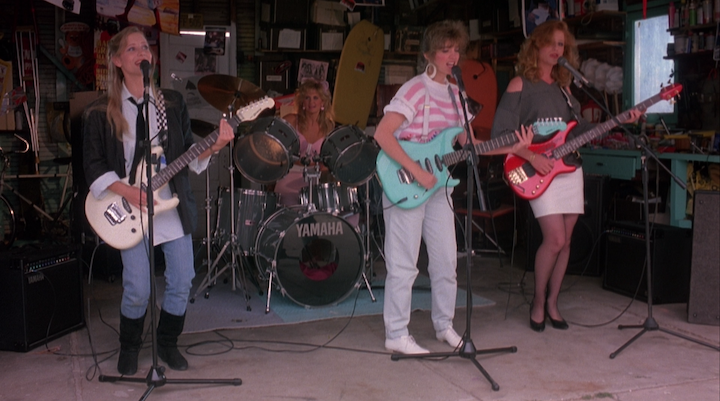 The basic contours of the plot go like so: Courtney and her older sister Valerie survived the last Slumber Party Massacre, a horrific event in which a chauvinistic serial killer gores teen girls with a power drill. While Valerie went mad from the trauma – or, rather, her refusal to address said trauma —Courtney copes by playing in a pop band with her friends, Amy, Sheila, and Sally, who could respectively be called Artsy, Rich Girl, and Mall Rat for the stock characters they depict. One dimensionality aside, the girls have an undeniable charm. They’re carefree and fun-loving, and seeing Courtney jamming, you’d never know she’d survived a serial killer’s death drill. In SLUMBER PARTY MASSACRE II, music acts as powerful art therapy.

But as Courtney’s love interest, Dreamy Matt, points out, surviving a Slumber Party Massacre is a “heavy trip,” and Courtney certainly hasn’t come out unscathed: she’s tormented by nightmarish flashbacks. And things get even worse once she and Matt share their first kiss: the flashbacks are replaced with violent visions of a drill-bearing rock-a-billy psycho stalking Valerie, who begs Courtney via the astral plane, “Don’t go all the way.” But the Rock-a-Billy Driller has the last word before skewering her: “Rock and roll will never die!” It’s ridiculous, sure, but it makes clear that virgin Courtney’s budding relationship with Matt has unleashed a beast. 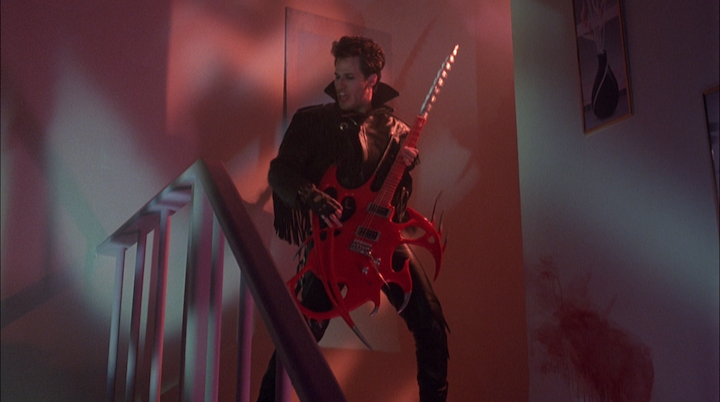 This link between sex and violence becomes the film’s refrain. Courtney and her pop-loving friends represent youth and innocence, while the Rock-a-Billy Driller symbolizes the destructive power of “it.” Each of Courtney’s dreams open with visions of shirtless Matt before transitioning surreal, synthpop-scored sequences of her friends that are torn asunder Rock-a-Billy’s Driller’s metallic screech and the violent imagery that follows. The villain’s comparatively harsh sound, his swagger, and toxic crowing — “Love the one you’re with” — exemplify the threat of the persistent, entitled male.

He’s the musical rendition of the misogynistic killer from the first THE SLUMBER PARTY MASSACRE, a movie intended to parody slasher flicks as a way of problematizing the very real threat of the male gaze and rape culture. Hollywood “magic” (via producer Roger Corman) transformed Amy Holden Jones’ original into a more traditional horror offering, but the chauvinistic killer’s anti-woman vibe still remains — he hisses things like “You love it” and Don’t you want it?” as he claims his victims — but so too does the feminist conclusion: the girls reclaim their power by breaking the killer’s drill bit. SLUMBER PARTY MASSACRE II’s writer/director, Deborah Brock, is keeping this theme alive, only with a far healthier dose of parody. (Whether the parody’s meant to parody proverbial parental panic over “kids these days” is open to debate.)

This sex/violence subtext becomes more apparent if we examine the girl band’s lyrics. When we first meet the gals, they’re lip-synching long-forgotten band Wednesday Week’s song, “If Only,” the lyrics of which include lines like, “I’m not the kind who’s never satisfied/and I know where my boundaries lie” and “There are things that I don’t do, and I accept the facts.” Here the girls are stereotypically virtuous. 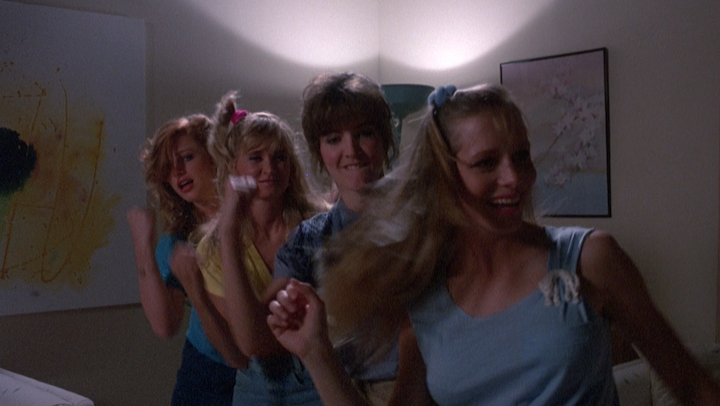 But make no mistake: these gals are far from prudes. They’re allured by a blowup sex doll; they’re proactive about their desires; and, in a direct parallel to Playgirl’s prominent placement in the original, the girls here gleefully pass around an erotic novel called Hot, Wet, and Wild. In other words, they’re girls who want to have fun, but on their own terms. Later, once the band embarks for Rich Girl’s dad’s condo for the titular Slumber Party (Massacre), they ham it up to a song called “Hell’s Café.” This is largely a way to get Rich Girl topless, wet, and covered in feathers, but it also reinforces the fact that these are healthily sexual women.

Ironically, it’s here, as the movie meets its tit quota, that the girl’s true feminist power shines though. Watching the girls let loose made me reconsider the entire MTV generation. Before they grew up into the apathetic Gen X, the youth of ’87 America were optimistic teens high on life and hair spray. Young women of this era aren’t often considered feminists, but their mere existence was feminist. The Go-Gos and The Bangles certainly didn’t make apologies, and neither do the gals. But, alas, they can’t escape the male gaze: Rich Girl’s Doofus Boyfriend and his friend are lurking outside, watching and waiting and generally being goons.

For the sake of brevity, I’ll jump ahead a bit: Dreamy Matt joins the party before another music video-interlude and more of Courtney’s nightmares, which devolve into pretty lame daytime delusions, i.e. being “attacked” by a frozen chicken and finding a “disembodied hand” in her sandwich. 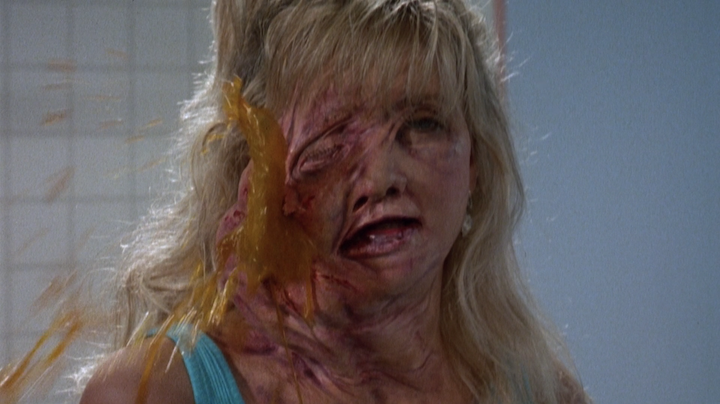 Courtney’s friends think she’s losing it, but not Matt: he’s more than supportive, and more than ready to go all the way. So is Courtney. And so too is Rock-a-Billy Driller: he bursts forth from Courtney’s psyche just as the couple are getting hot and heavy, kills Matt, and taunts Courtney, “C’mon, baby, we’re gonna rock and roll!” Oy. 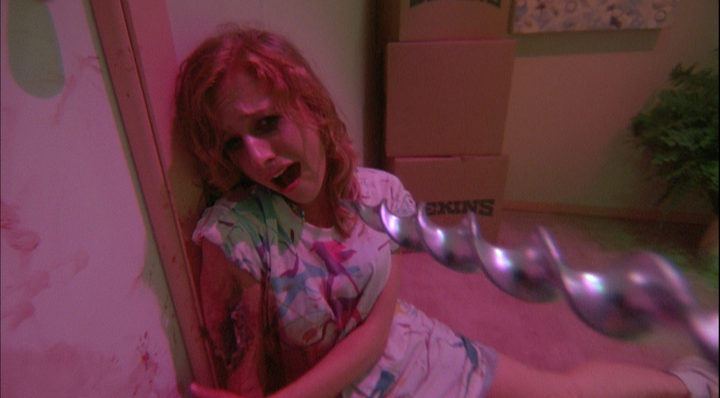 From there the movie descends into familiar horror movie mayhem, much of it punctuated by musical elements: a middle-aged neighbor is blasting classical music and thus can’t hear Doofus being murdered; the teens try—and fail—to escape in a Grateful Dead-stickered car; and, in what’s the most absurd/glorious thing I’ve ever seen in a horror movie, Rock-a-Billy Driller performs The Paladins’ “Let’s Buzz” as he sings, dances, and generally preens his way toward his prey, Rich Girl.

Here lyrics are hardly appropriate for a psycho killer — “I got a penthouse in the Ritz I bought it with my hits.” — as is his showboating, but the Driller’s non-consensual intentions are unambiguous: “I can rock you in the cradle till you scream for more.” Poor Rich Girl doesn’t stand a chance. (Well, she could have run a mile while the killer performed, but we all know horror and logic rarely go hand-in-hand.) 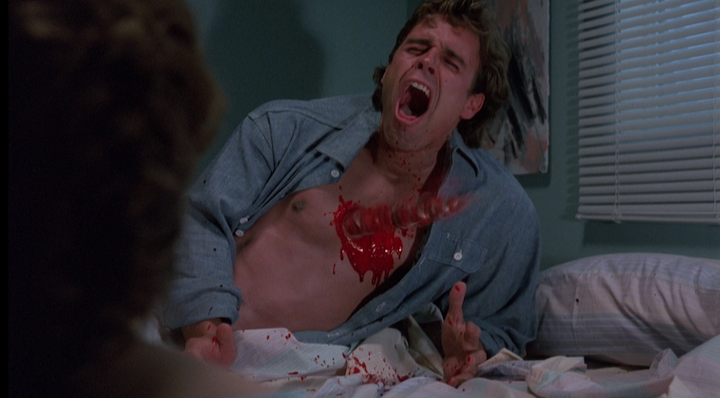 Anyway, the movie comes to its “climax:” Courtney and killer are at a construction site; he’s crooning a rapey song, “Can’t Stop (Lovin’ You)” (choice lyrics: “I can’t stop lovin’ you/I won’t stop still I do”), she grabs a very convenient blowtorch; the killer goads, “C’mon baby, light my fire,” and she does, incinerating him and reclaiming her power. It’s not as impactful as the original’s end, but the symbolism’s much the same: Girl power trumps toxic masculinity any day.

Early in the movie, before their untimely deaths, the girls partake in champagne and corndogs, a culinary pairing that approximates the high/low of this cinematic offering, and music’s role within. In other words, it’s not as cheap as you may imagine. Yes, it’s ridiculous and campy and filled with too many horror tropes, including the obvious parallel and frequent allusions to A NIGHTMARE ON ELM STREET, the genre’s then-grande dame, but this film also has an incredible amount of heart: the girls are endearing, there are some nicely ominous shots, and the acting’s actually not that bad — Courtney later went to star on eight seasons of NBC’s Wings. Plus, that dream scene of a puss-spewing zit that is pure DIY F/X gold.

Sure, SLUMBER PARTY MASSACRE II has plenty of sour notes, but there are some right ones, too. You just have to listen closely. Though be warned: some of the tunes will haunt you.

Andrew Belonsky
A writer with 15 years of professional experience, Andrew Belonsky has covered politics, art, and culture for a plethora of publications, including The New York Times, The Daily Beast, The Millions, and many others, high and low alike. He also wrote a cultural history of the log cabin in America and maintains a personal website, In Case You're Interested.

Regardless of what he writes about or for whom, he traces his love of words back to one source: comic books. Also, he firmly believes JoBeth Williams deserves a retroactive Best Actress Oscar for POLTERGEIST.