I wasn’t quite old enough to indulge in disco – roller or otherwise – but I heard from an anonymous source* that it was really swell. Not to mention incredibly masculine.

Linda Blair plays Terry, a spoiled rich kid from the right side of the tracks. Like most teens in that predicament (at least in movies), Terry desperately yearns to rebel from the social trappings that are keeping her down. And what better way to stick it to The Man than to indulge in the debauchery of roller disco?

Basically, a group of kids fight a group of bad guys in order to save their beloved roller disco. Montage ahoy!

ROLLER BOOGIE delivers the goods, Bastards. Assuming “the goods” can be defined as horrific fashion, bad dancing, and an ample supply of moose knuckle.

Did you dig THE APPLE? CAN’T STOP THE MUSIC? SCHINDLER’S LIST? Then you might dig this, too. 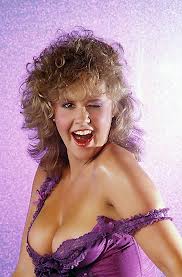