The new crop of films coming from the Fangoria magazine—the reborn horror rag that flourished in the ‘80s—share a certain aesthetic. The films are overlit and at times look remarkably cheap, which is surprising particularly coming from an outfit that takes the genre so damn seriously. There’s also lots of juvenile humor, bare breasts, and misguided attempts at political and social commentary (look no further than PUPPET MASTER: THE LITTLEST REICH). Maybe this is the new visual pallet for low-budget horror like a modern day take on shooting on VHS?  SATANIC PANIC  knows what it wants to be—a sleepover movie for adolescent girls and boys who devour the works of R.L. Stine and Christopher Pike, and for the adults that still adore those teenage terror tales. All the parts may be there, but SATANIC PANIC has no soul and blame for that can’t be put on the demon Baphomet.

It’s Sam’s first day delivering pizzas. Her Schott style leather jacket fits just right and is adorned with the appropriate enamel pins as she cruises around town on a beat up scooter. The guys at work are rude and crude, cracking wise with sexual innuendos while explaining to Sam the ins and outs of the pizza delivery industry and the customers are a pain and even worse, they’re cheap. Desperate for a tip above 10%, Sam takes a delivery outside of the zone to the rich side of town. Upon delivery, Sam is stiffed by the party, so she breaks in to confront the homeowners…who turn out to be a coven of Satan worshipers looking for a virgin for their ritual and unfortunately for Sam, she fits the bill.

Grady Hendrix knows his way around the young adult horror sub-genre that has populated grade school and high school book fairs since its heyday of the late ‘80s. His book Paperbacks From Hell and his presentations he takes on tour showcases a depth of knowledge on the subject, the tropes, the beats, and most importantly, the style. It’s all present in the script and the jokes are all there, but the direction by Chelsea Stardust simply doesn’t give the film the snap and pop that it needs. There are long master shots—almost only master shots—and rarely a cut to a close up, never allowing the scares or the jokes to truly land. 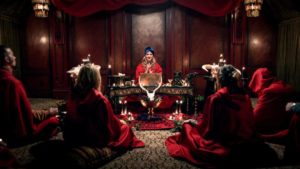 As a result, SATANIC PANIC has a lack of energy, and the film suffers as a result of it. It wants to be a horror comedy like FRIGHT NIGHT or THE GATE that ran perpetually on late night cable throughout the Reagan era and into the ’90s. The sense of humor that permeates Hendrix’s script arguably works better than the films horror elements, and a lot of that comes out of the interactions devilish cult that’s terrorizing Sam the pizza delivery girl delivers at times. Rebecca Romijn has an evil sexiness about her as the leader of the W.A.S.P.-y cult of devil worshipers and perpetually puts Arden Myrin as Gypsy—who is constantly trying to usurp Romijn’s leadership—in her place with bitchy glee. Gina Hughes delivers a funny and slight performance as a practically mute member of the cult. There is a hamfisted attempt at making the film a deeper commentary on class and money featuring a heroine with $5 to her name taking on rich, white weirdos in the suburbs, but the rich weirdos are probably the most interesting characters in the film. There is little backstory on the lead Sam until halfway through the film, and all the exposition is laid out during a gore sequence which is honestly much more interesting than the conversation. 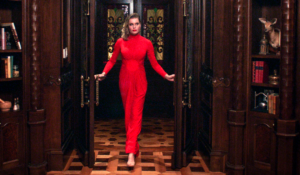 While the studio may not be putting money into the visual style of the film—even the climatic raising of Baphomet looks cheap and like it was literally shot in someone’s backyard utilizing props and costumes from Spirit Halloween and Lover’s Lane—they don’t skip on the gore. There’s nothing terribly memorable but the sight of Romijn disemboweling A.J. Bowen is appropriately nasty and gooey. That said, writing this review, I’m not really sure why she was doing it. There’s a lot that happens in SATANIC PANIC that will have audiences asking, “wait, why did that just happen,” and it is frustrating. I felt at times that the filmmakers were cynical thinking to themselves, “it doesn’t matter, just give them the money shot and they won’t ask questions.”