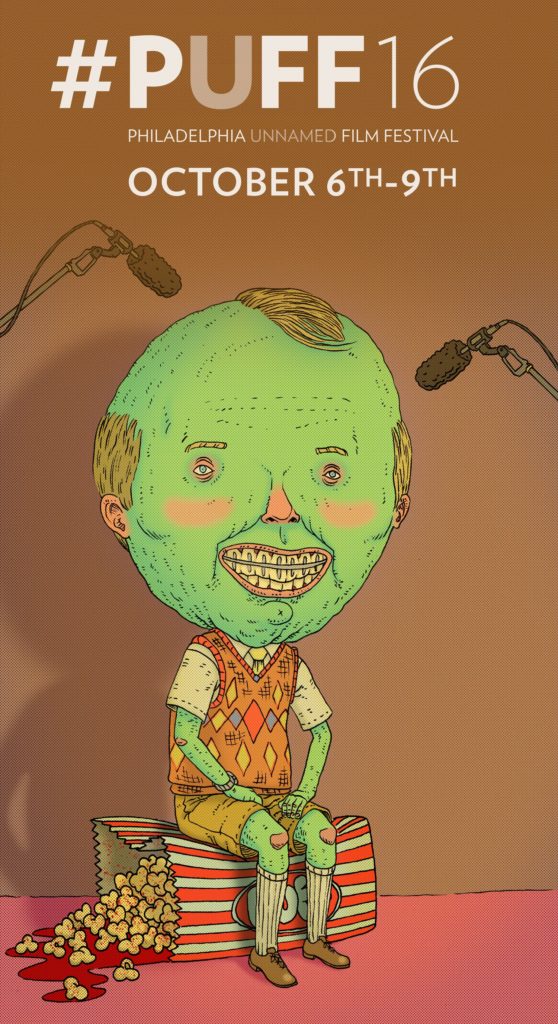 2016 is the inaugural year of the Philadelphia Unnamed Film Festival, a new DIY festival created to showcase the work of independent genre filmmakers from around the world. The first year’s schedule includes a number of shorts and six features that screened over the weekend of October 6th through the 9th. Daily Grindhouse’s Jason Coffman covers all the features screened at the festival, listed in the order in which they screened at the fest. 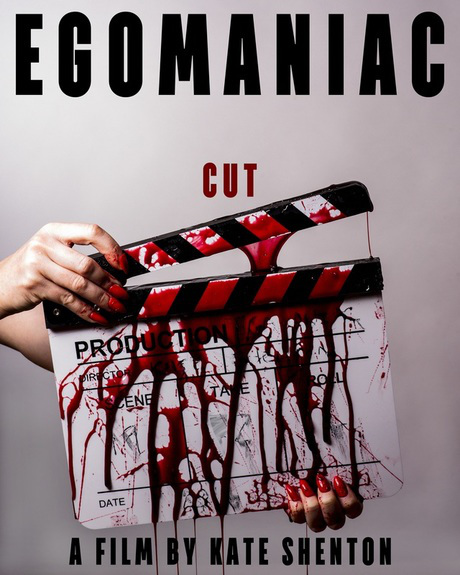 Catherine Sweeney (Nic Lamont) is an independent filmmaker trying to get her zombie horror romantic comedy feature off the ground. It’s not going well. One produer, Derek (Simeon Wells), insists she put a talking dog in it to make it more marketable, and another extremely suspect producer Nathan (Adam Rhys-Davies) agrees. Catherine bickers with Kevin (David Wayman), the leading zombie in her screenplay, about making the film and maintaining her artistic integrity. Who’s a girl have to kill to get a movie made these days? EGOMANIAC is a super low-budget DIY feature from filmmaker Kate Shenton, who drew on her own experiences working in independent film. This is pretty vicious satire, not just of the predators willing to take advantage of Catherine but of her own issues with ego—hence the title. Nic Lamont is fantastic in the lead, and it’s often very funny, but it turns very dark in the final act. It definitely feels earned, though, and EGOMANIAC is one of the best independent horror films of the year. 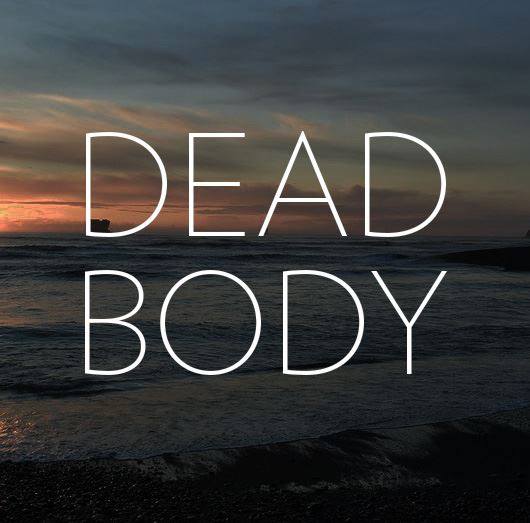 Following their high school graduation, Dominic (Jay Myers) invites exchange students Mariko (Miho Aizawa) and Kenji (Koe Sakuta) and his friend Ilsa (Rachel Brun) to a weekend at his dad’s lake house. He’s deeply annoyed to discover that Ilsa has invited five more people along, including the vaguely threatening 23-year-old Dwayne (Cooper Hopkins), who she hooked up with at a recent party. Rumor (Nic Morden) suggests they play “Dead Body,” a murder mystery parlor game, but once the game gets started somebody starts killing people for real. DEAD BODY is a fun slasher/murder mystery that doesn’t hold back on the gore. It’s surprisingly gruesome for something that feels fairly light until the murders start. Its main issue is a typical one for indie horror films: virtually all the characters are insufferable, making it tough to work up too much empathy for them before they are brutally dispatched. Still, it looks nice, the cast is good, and those practical effects are impressively nasty. 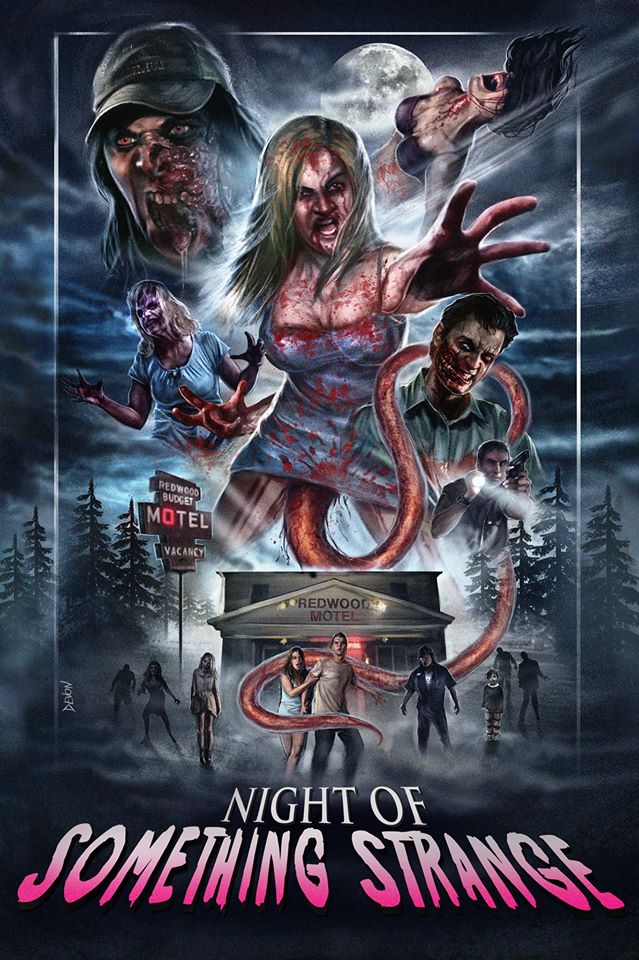 Before the title card for NIGHT OF SOMETHING STRANGE is even displayed, there is a scene of a morgue janitor raping a female corpse followed by one where he goes home, turns into a zombie, and rapes his wife. It isn’t until shortly after the title card that it becomes clear that this is supposed to be a comedy. As far as that goes, it’s a standard low-budget zombie horror movie, although one that goes out of its way to be as crass and disgusting as possible at every opportunity. Every bodily fluid you can think of gets trotted out for a gag: blood, vomit, urine, semen, menstrual blood, etc. etc. It’s not until the final act that things start getting really crazy with some inspired genital monsters, showing off some great monster effects, but by then it’s too late to save NIGHT OF SOMETHING STRANGE from registering as anything more than yet another low-budget zombie movie.

College dropout Victoria (Mary Malloy) sneaks out of her house and steals her stepdad Wade’s (Brian Troxell) car to go to a party with her best friend Kelly (Chelsea Howard), but when they stop for gas they’re attacked by some kind of creature. A month later, Victoria’s parents have hired a private detective named Paul Stensland (Troy Halverson) to find her. He manages to bring her home in between bouts of psychotic delusions of his own, but while Wade thinks Victoria is just on drugs, the truth is much more dangerous. BAD BLOOD was produced and features incredible makeup and creature effects by James Sizemore (THE DEMON’S ROOK), and the monster at the film’s center makes the movie worth watching on its own. The story feels oddly complicated, especially in regards to Stensland’s violent hallucinations, which culminate in a frankly anticlimactic payoff. Regardless, anyone looking for a gory, entertaining creature feature will find BAD BLOOD well worth seeking out. 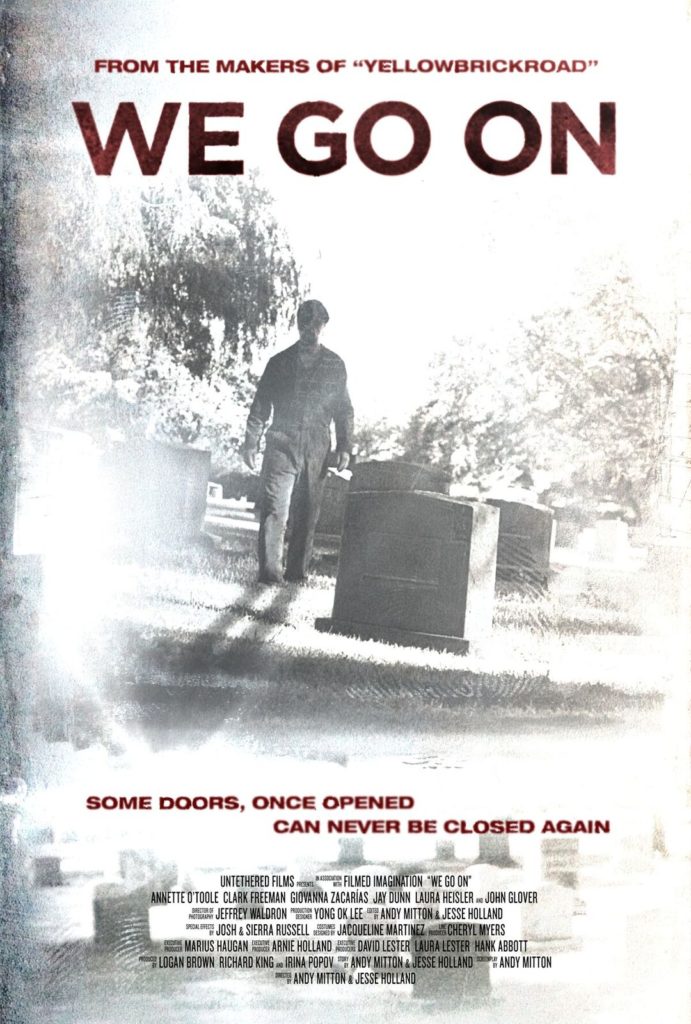 Miles (Clark Freeman) has become paralyzed by his fear of death to the point that he can barely leave his apartment. In a moment of desperation, he puts out an ad offering $30,000 to anyone who can give him verifiable proof of any kind of afterlife. His mother Charlotte (Annette O’Toole) comes to stay with him and help him sort through the applications, narrowing down the possibilities in their search. After some dead ends, Miles may find what he’s looking for in a way he never could have guessed or wanted. Co-directors Andy Mitton and Jesse Holland previously directed the 2010 horror film YELLOWBRICKROAD, a unique and fascinating movie that showed serious promise. WE GO ON is another very unique story, especially in that its center is an adult mother-son relationship. The cast is great, and their interactions help enable some seriously creepy moments and set pieces. It stumbles a bit at the very end, but overall this is a solid, interesting horror drama well worth a look. 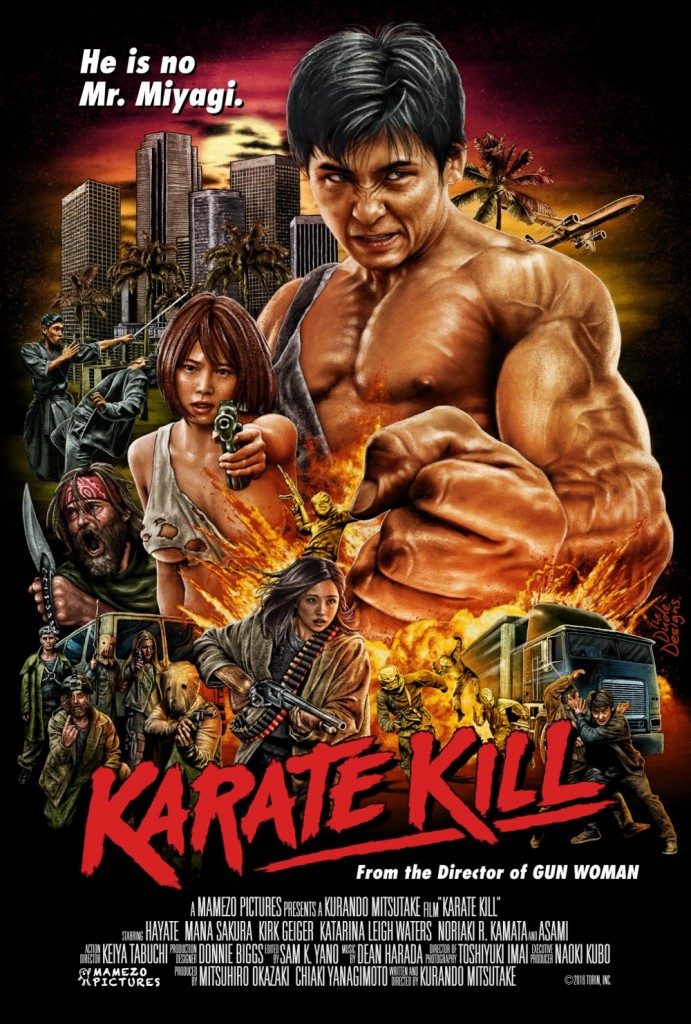 Kenji (Hayate) flies to Los Angeles when he’s unable to get in touch with his sister Mayumi (Mana Sakura) for a month. He follows a trail of clues that lead him to a cult called Capital Messiah that runs a web site streaming snuff videos for high-paying subscribers. Mayumi was kidnapped by the cult’s Mansonesque leader Vendenski (Kirk Geiger), eyepatch-wearing femme fatale Simona (Katarina Leigh Waters) and Benning (Tomm Voss), who looks like a Metal Gear character. Kenji finds Capital Messiah’s home base and joins forces with Keiko (Asami), the only victim to ever escape the group, to save Mayumi and kill all of Capital Messiah. KARATE KILL’s gory action is defined by some really good fight choreography and some really bad CGI blood effects. The latter are particularly frustrating because the fight scenes are shot in longer takes than most modern action films on any level so you can really see what the fighters are doing. It deals with some dark stuff, but never gets to the same level of grimy exploitation as something like GUN WOMAN. It’s very reminiscent of low-budget late 70s/early 80s action films, although it’s never quite as much fun as the best of them. It’s still a solid independent martial arts action movie, though, which is exceptionally rare, and it’s probably a blast to watch with a game audience.