THE FOG is coming to Blu-ray (along with THE INCREDIBLE MELTING MAN) on July 30th so we’ve got plenty of space between now and then, but that isn’t stopping Scream Factory from dropping some goods to wet your appetite. The cover art for the special edition has premiered over on the label’s Facebook page (which you should be following for good shit like this) and I really dig the direction they took with this. Have a look… 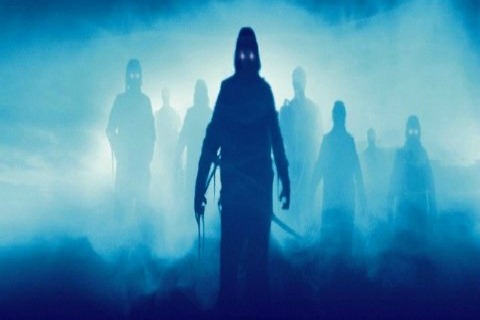 The idea of using the warm tones and almost gentle character drawings for a film like this is pretty impressive. Granted, the zombie/ghosts/gombies at the bottom hint at the danger in store but the subtlety of this design really work for me.

There is a really exciting backstory to the production, a story which could serve as a tool to future directors about just what is capable when you’re editing a film and how vital it is to understand every step of a production. Carpenter knew how to fix his problem and it paid off; THE FOG is a film constructed by atmosphere and cheap tricks to great effect. Though more zombie than ghosts, the figures move with a lumbering intensity thanks to some tremendous make-up effects by Rob Bottin. This was the first feature film to re-unite Janet Leigh with her daughter (HALLOWEEN alum) Jamie Lee Curtis. More details as they come in.

SEE YOU ON FORTY DEUCE,
G