Feeling Board in Chicago?

John Wintergates’ insane 1982 flick BOARDINGHOUSE is the great granddaddy of shot-on-video horror spectacles, name-checked by anyone with a passion for SOV horror history. Barry Gillis, director of THE KILLING GAMES, mentioned it in G’s interview with him here. Now, thanks to the Wednesday Rewind series hosted by the ever-lovely Katie Rife and the folks at Everything is Terrible!, Chicago audiences can finally see BOARDINGHOUSE the way it was never meant to be seen — in a movie theater. 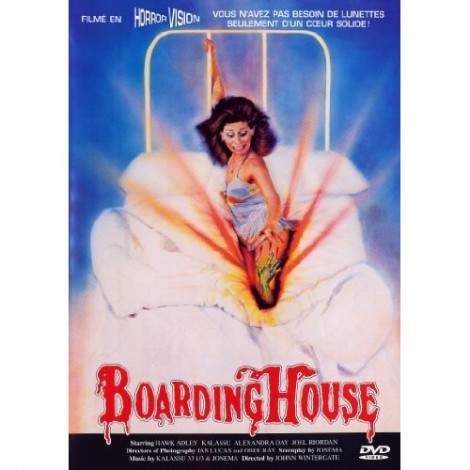 Let’s go to the description!

WEDNESDAY REWIND goes to the source with the first ever shot-on-video horror movie: the gory, goofy, utterly mind-blowing BOARDINGHOUSE (1982)!

When you think of a shot-on-video ’80s horror movie, what comes to mind? Outrageous corn-syrup gore? Check. Rampant nudity? Yup. Incoherent story lines? Got that. Embarrassing attempts at humor? Mmm hmm. Moments of actual sincerity that are simultaneously funnier than anything intended as “comedy” and a devastating glimpse into the darkness at the depths of the human soul? Oh yeah. BOARDINGHOUSE has all this, and more!

The basic plot of BOARDINGHOUSE is like a lot of other slasher movies: group of nubile aspiring actresses move into a cursed LA ranch house owned by a chiseled weirdo with feathered hair and psychic powers (played by the director, John Wintergate). Mayhem ensues. But the rest….the rest is like drinking absinthe with Satan at an ’80s-themed pool party. Enjoy.

“It’s probably a good thing after all that there are so few films like BoardingHouse: we might get used to them, and never enjoy a coherent movie again.” -Stephen Thrower, Nightmare USA

The show starts at 10:30 PM on Wednesday, March 13th at the Logan, 2646 N. Milwaukee, Chicago, IL 60647. Check out a preview below and their Facebook page here, and then make your way to Logan Square for a time you’ll not forget, no matter how much therapy you pay for!

Those not in the Chicago area shouldn’t freak out just yet, though, as Slasher // Video, the team behind the recent releases of Nick Millard’s amazing DEATH NURSE films, has recently announced plans to re-release BOARDINGHOUSE to DVD, as viewable below!