Chicago’s Patio Theater will close again this month – this weekend, the grand place is the home of the Sci-Fi Spectacular, with a full day of sci-fi excitement, HELLBOY’s Doug Jones and NIGHT OF THE LIVING DEAD’s Kyra Schon. 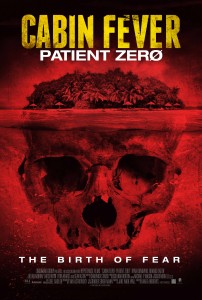 The first eight minutes of Ed (BLOODY BIRTHDAY) Hunt’s HALLOWEEN HELL can be seen over here.

CABIN FEVER: PATIENT ZERO gets a release date of June 26 for VOD and August 1 for select theaters.

John Squires looked at board games based on horror movies over at FEARnet.

This is old, but VHS Collector’s piece on misogyny in horror cover art is pretty interesting.

And killer clowns are afoot in the trailer for CIRCUS OF THE DEAD, premiering at Texas Frightmare Weekend in May: