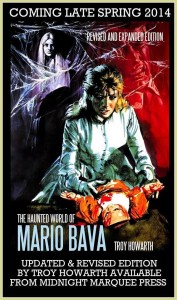 Joe Dante brings out his list of underrated westerns at Rupert Pupkin Speaks.

Mark Tinta writes about SONNY BOY in more depth than we did over at Good Efficient Butchery, just in time for Brad Dourif’s birthday.

Troy Howarth readies an updated version of his book “The Haunted World of Mario Bava” from Midnight Marquee Press.

Video Junkie takes on Cynthia Rothrock in HONOR AND GLORY.

In honor of the TV movie HORROR AT 37,000 FEET arriving on DVD, Made for TV Mayhem presents their Ten Favorite OMG TV Movie Moments.  Spoilers!

(Better get used to this genre, it’s going to be the subject of several hundred academic texts in about ten years.)

And, dang, if this trailer for MALEFICENT doesn’t sell me on it:

Lastly, here is Danny Trejo making animals out of bread because… er… answers in the comments?