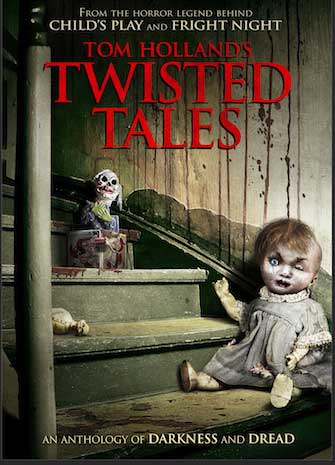 On the surface, the idea behind “Twisted Tales” sounds great.  An anthology series designed for the web and VOD (and thus, not confined to specific running times or the whims of network censors), directed, written and introduced by horror film auteur Tom Holland, with a number of notable genre names in the cast and the reliable FEARnet behind it, “Twisted Tales” should have been one of the must-watch horror events of last fall, when the series appeared on FEARnet’s website and on VOD.  Short horror films have been making a large comeback lately thanks to the fact that you no longer have to go to offbeat film festivals just to see them, and FEARnet has been a huge part of that.

Image Entertainment’s new DVD release of the series allows viewers the chance to see all nine episodes in one quick gulp – or at least semi-quick, as the running time of the episodes totals to nearly two and a half hours.  (The box art makes the mistake of packaging it as an anthology film – it’s not, and there’s no patchwork editing to try to disguise this fact outside of eliminating the credits for each segment.)  Like most anthologies, there are high points and low points, but in TWISTED TALES, the latter unfortunately wins out.

The first and most obvious issue with TWISTED TALES is Holland himself.  Tom Holland is a great writer and director, and his contributions to the world of genre film ranging from big names like FRIGHT NIGHT and CHILD’S PLAY to his screenplays for PSYCHO II and CLASS OF 1984 to lesser-noted works like the TV-movie THE STRANGER WITHIN and his script for CLOAK AND DAGGER mean that I’ll always have great respect and interest for what he does.  He’s not, however, a horror host, a fact readily apparent as he introduces each episode the way a pleasant uncle would tease you about not eating your brussell sprouts.  When you’re hosting a horror anthology, you don’t need to be the Crypt-keeper, spouting out bad puns and giggling hysterically at them, but you at least need some drama in your voice and the words you’re using to convince people they’re about to be scared shitless.  More Garth Marenghi, less Ray Bradbury.

The series starts off an awkward foot with “Fred and His GPS,” starring THE SIGNAL’s AJ Bowen as a man who has just killed his wife and now faces off against a GPS that may hold her spirit.  There’s potential there, along with a solid performance by Bowen, but the story is let down by some sub-par CGI effects and lack of genuine cleverness and suspense beyond the intriguing premise.

It’s similar problems to these that plague a number of the TALES.  “To Hell with You,” the second segment, would seem to be a winner – Danielle Harris plays a woman whose boyfriend breaks up with her, and a mysterious stranger (William Forsythe) offers the chance for revenge, but the price may be more than she’s aware of.  Unfortunately, the low-rent CGI that comprises the climax shifts the whole thing into a much campier realm than the actors had been playing, and the lame dialogue and awkward direction don’t help much either. 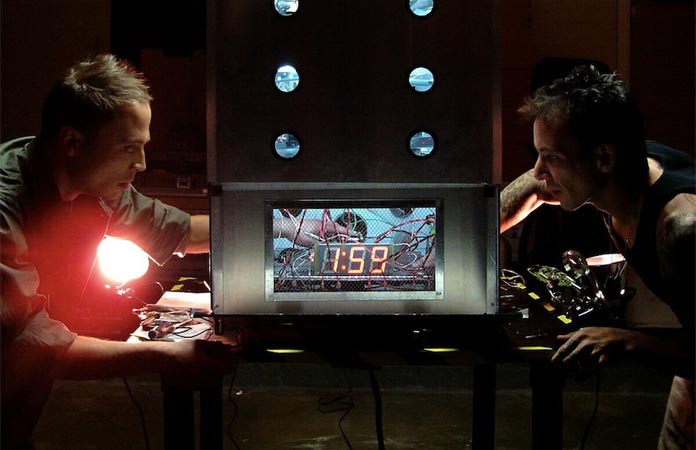 “Boom” is one of the highlights of the series, mostly due to a reliance on actual tension rather than ridiculously phony-looking fire.  TROLL’s Noah Hathaway (!) and Alex Unborn play a pair of best friends who are also retired bomb specialists, and when one believes the other is sleeping with his wife (the I SPIT ON YOUR GRAVE remake’s Sarah Butler), he sets up an impressive bomb that resembles an industrial pinball machine.  While not terribly memorable, at least “Boom” is well-made enough to stand on its own as a passable short.

However, we’re back to the dregs with “Mongo’s Magic Mirror,” which contains enough bad CGI to sate a LAWNMOWER MAN sequel directed by Uwe Boll.  Ray Wise does his best as a washed-up magician selling the titular magical mirror to an asshole on the rise, but Joel Ward (an actual magician, who performs no actual tricks in the short) and Breanne Racano turn in some of the most awful line readings I’ve seen outside a middle school production of “The Magic Show.”  It doesn’t help that the dialogue is completely atrocious – the whole thing would be hilariously awful if it weren’t for Wise’s sincere performance.  (Ray Wise, it has to be said, never phones it in.)  It’s especially a shame, as the contrast between the color-deprived “real world” and the color-saturated “mirror world” could have been used to great effect were it not for the sloppy delivery. 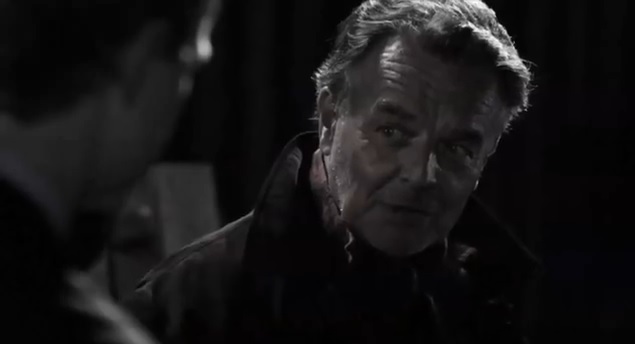 “Bite” starts out with some potential, as a group of friends smoke a new strain of salvia that promises impressive hallucinations, but soon runs off the rails as they start turning into werewolves (!).  The acting, for the most part, isn’t bad, and the make-up effects are good, but the short just feels like a random batch of stuff happening rather than an isolated story.

The following entry, “Shockwave” is a “group of friends placed in a dramatic situation” set-up as well, this time involving a electromagnetic pulse that promises the end of the world.  Stylistically, it’s a step in the right direction – the cast includes James Duval, “Buffy”’s Amber Benson, and MAY’s Angela Bettis, and the isolated setting allows for some solid paranoia not distracted by CGI that can’t match the idea’s ambition, even if it does feel like an updating of the episode “The Shelter” from “The Twilight Zone.”

“Cached,” concerning a Tablet possessed by the body of a vengeful hacker who kills everyone who picks it up (“It’s what I do,” he explains) benefits from solid performances as well, most notably by Adam Rose (Mac’s boyfriend Max on the third season of “Veronica Mars,” who isn’t in the movie for some reason) who nails the over-the-top monstrousness that the ludicrous plot demands.  It’s also just short enough to prevent you from trying to think about it. 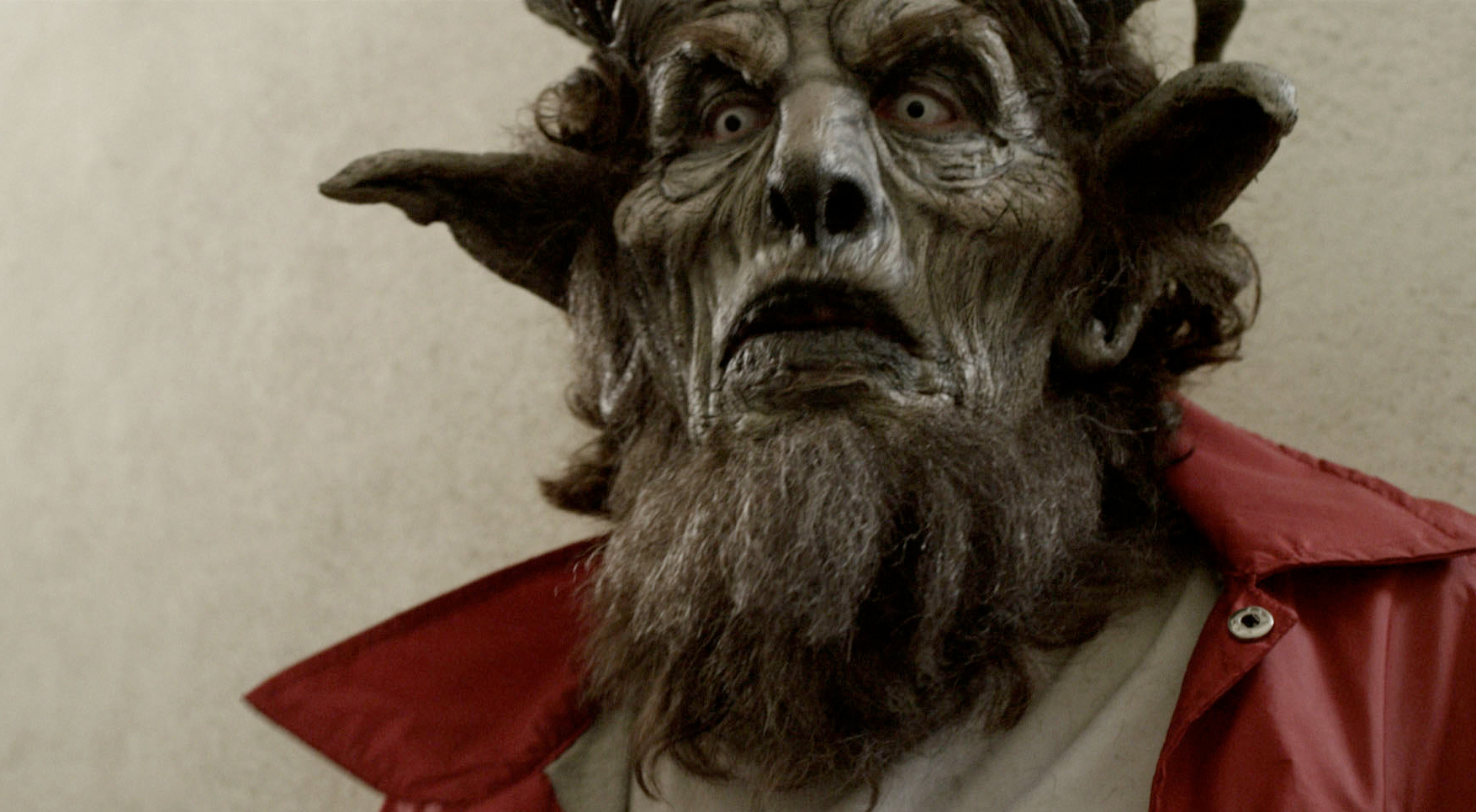 The longest short, “Pizza Guy,” takes up over a half-hour of the running time, and it’s not bad, though it does suffer from some stumbling over awkward dialogue.  We’ve got another group of friends (who are really into Pong, for some reason) who attempt to summon the devil using an old book and a pentagram, who may or may not appear in the form of a pizza guy (Marc Senter).  It’s a surprisingly enjoyable ride, even if tries a bit too hard to nail the comedic aspects and potential for suspense gets a little bit lost.  The lead performance by Erin Smith centers the piece nicely.

The final segment, “Vampire Dance,” would seem like a natural for the FRIGHT NIGHT director to try on – he even appears as a janitor in a nightclub as the introduction is really awkwardly mixed in with the start of the short, a tale of a young woman (Lisa McLowry) looking for her missing roommate and ends up finding a vampire dance club.  Don’t, however, expect Jerry Dandrige seducing Amy on the dance floor – this night club looks like a cheaply-shot basement outfitted with some backdrops picked up from Party City.  (One bouncer wears an Evil Ed shirt, though.)  After the promise of “Pizza Guy,” TWISTED TALES ends on a tale without a twist that feels like an afterthought, an extended third-rate music video with music from an elevator lit by glo-sticks from a dollar store.

The contents of TWISTED TALES are such a mixed bag, ranging from “dire” to “pretty good,” that it’s a hard package to recommend, but there are shorts here worth a look and Holland fans should check it out.  Many of the issues with the shorts, however, come from the ambition overreaching the imagery (and sometimes performances) that the meager budgets or time allotted have allowed for – ideas more aligned with the constraints of the format may have allowed for a more satisfying set of shorts.  The shorts that manage a consistent tone (most stories don’t settle on being campy or serious and end up somewhere between the two) and solid acting make FEARnet’s venture worth a look, but there are too many misses to rank TWISTED TALES among the better recent horror anthologies.  The DVD includes “making of” features, which are interesting but not especially noteworthy.