Actress Lee Chamberlain, of “The Electric Company,” has died at the age of 76. Among her cult film roles were BEAT STREET, the 1980 TV-movie BRAVE NEW WORLD, WILLING TO KILL: THE TEXAS CHEERLEADER STORY and the Sidney Potier films UPTOWN SATURDAY NIGHT and LET’S DO IT AGAIN. 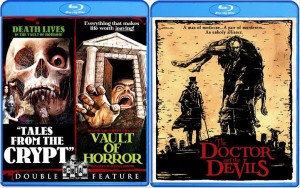 Scream Factory announces a Blu-ray double bill of the Amicus flicks TALES FROM THE CRYPT and VAULT OF HORROR, along with the Burke & Hare tale THE DOCTOR AND THE DEVILS.

The ScreamCast is joined by SLEEPAWAY CAMP’s Felissa Rose to talk about the film’s new Blu-ray release.

The incredible story of the real skeleton in DAWN OF THE DEAD.

In search of the makers of the instructional tape for the DragonStrike board game.

The Daily Beast on how LIQUID SKY developed its cult movie status.

Here’s a new trailer for Eli Roth’s THE GREEN INFERNO:

And one for the coal miner horror pic BENEATH, no relation to the Larry Fessenden film: