THE SPACE BETWEEN US (no connection to the 2017 feature of the same name) is a short film produced in The Netherlands and released in 2015. It just so happens to be a sci-fi/fantasy about a cleaning woman (Elsa May Averill) in a laboratory facility who frees a “merman” named Adam (Kiefer Zwart) to save him from vivisection at the hands of cruel scientists. Ahem.

Striking similarities to a certain recent Oscar-winner aside, there is plenty to love in the film. The production design is striking, catching the right balance between industrial despair and the alien feel of a world where humans are on the brink of extinction. The visual effects are beautiful and so accomplished that they put the work of many major Hollywood productions to shame. The score by Einar Sv. Tryggvason is tremendous, capturing a ton of emotion in a short runtime.

I want to be clear that I do not think there is a case of any kind of plagiarism here. There are enough differences between the plots and tones of each film to convince me of that. But some people will think otherwise. It is a shame that THE SPACE BETWEEN US will probably only be remembered as a footnote to THE SHAPE OF WATER. It is a lovely, more serious-minded take on a similar subject. 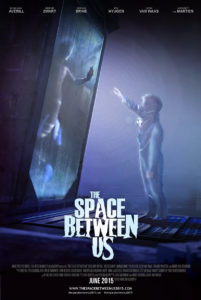 Tags: Einar Sv. Tryggvason, Elsa May Averill, Kiefer Zwart, Short Film of the Week, The Shape of Water, The Space Between Us