Lest you think the DAILY GRINDHOUSE staff are a bunch of haters that never did anything creative, today we are featuring two short films from writer MAC BELL and Assistant Editor, MIKE VANDERBILT…think of us as the French New Wave of grindhouse cinema.

LYCANTHROPE was filmed before a live studio audience. Well, no, actually it was filmed in front of a crew of Montana State film students who were looking to make the next great werewolf comedy short. I can’t say we accomplished the task, but we sure had a lot of fun trying. Filmed in 1995 in Bozeman, Montana at Montana State University on a shoestring budget of $3,000, LYCANTHROPE tells the tale of two wacky kitchen personnel who get chased by a werewolf in the basement of a food services department in a girl’s dorm. And that’s about it for plot. As the director, writer and one of the stars of the film, my love for slapstick, chases and monsters overrode any attempt to create a layered plotline full of twists and turns. I wanted to create a live action Scooby Doo cartoon and on that level, I guess you could say; mission accomplished.

Other than a student viewing at the end of the semester and the occasional screening for family and friends, I’ve never marketed this creaky, clunky, yet I hope for some, fun film, so when Daily Grindhouse agreed to let me premiere the film online on the site, I jumped at the opportunity. Thank you DG editors Jon Abrams and Mike Vanderbilt for allowing me to do so. More thanks go out to Andy Vanderbilt for creating the fun poster for it and to friend Josh Perkins, who helped with some post edits on YouTube.  And a big thanks to all the students in the credits who helped me piece this goofy little thing together, particularly Andres Delgado, who was my right hand man during the production. 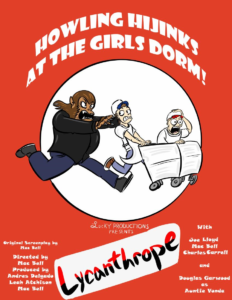 So give our little movie a view if you can. It’s Bad B Movie making at its best…worst…well, you get the point. Thanks and enjoy! 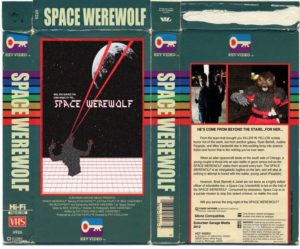 It’s been five years since Pat O’Sullivan and I made SPACE WEREWOLF, and it all began with a telephone call.

“This flippy cup documentary isn’t working out, what else do you got?” Pat asked me on a late night, post work chat.

“Well, I’ve always wanted to make a movie about a werewolf from outer space.”

That was all it took.

SPACE WEREWOLF began as an 8-page script by O’Sullivan and grew into a twenty-minute short film. Created for the Moraine Valley Film Club (a community college in the southwest suburbs of Chicago) it remains one of my favorite short films I’ve ever worked on. The film is very much a distillation of Pat’s interests and mine: ‘70s AM pop, Troma films, STAR WARS, and the VHS era. The budget consisted of whatever Pat and I brought with us to the hardware store, the actors and actresses were friends from the neighborhood and colleagues from the MVCC film club. The script grew from those 8-pages and one of my favorite sequences—the NIGHT OF THE CREEPS/CRITTERS inspired opening sequence—was a last minute addition to the story. Daily Grindhouse illustrator Andy Vanderbilt and his buddy Eric Berndt built that spaceship in my parent’s garage over a couple days, and to give the illusion of two spaceships; we simply shot from different angles and utilized different lighting.

SPACE WEREWOLF marked our first collaboration with composer Mike Donnelly. A bar regular of mine turned friend who always told me that if “you ever make a movie, I can do the score.” His music was a perfect combination of Williams bombast and Carpenter creepiness and I always felt, really drove the film.

Shooting took place from unseasonably hot March to May in the spring of 2011 and the film went on to win best picture and best sound design at the Moraine Valley Community College Student Film Fest. From there SPACE WEREWOLF was an official selection at TROMADANCE and has been a 2 A.M. favorite for everyone who worked on it. It’s also worth noting that SPACE WEREWOLF has a ridiculous amount of views thanks to an unrelated LIV & MADDIE episode that features a film with a similar title.

Since then I’ve made movies that may have had a more professional sheen, but for me nothing beats the pure imagination of SPACE WEREWOLF. I’ve always thought it had legs for a full length. 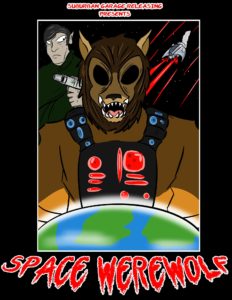