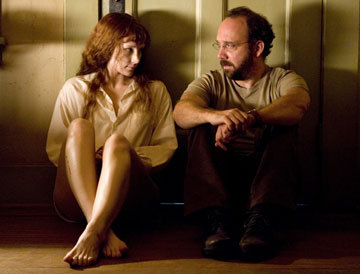 After breakout success of THE SIXTH SENSE in 1999, the name M. Night Shyamalan became associated with blockbuster thrillers. The way he utilized relatable and seemingly normal characters involved in supernatural storylines became a staple in his films, along with a payoff at the end with his memorable twist endings. Whether one was a fan or not, there’s no doubt he became a rare behind the scenes player who became a celebrity. It’s this celebrity status that possibly turned many people off as he delivered back to back financial successes like SIGNS and UNBREAKABLE, while attracting big name actors like Bruce Willis and Mel Gibson. Being the hot director at the time, Shyamalan used this moment to bring to the screen a bedtime story he used to tell his own children. While Shyamalan himself never lied about what kind of movie he wanted to make, the marketing materials promised something else which might have led to the overall negative reaction LADY IN THE WATER received. I remember the initial teaser poster that presented wet footprints, leaving curious fans asking as to who and what exactly is this lady mentioned in the title. I was instantly intrigued as the presentation already felt fresh and new compared to his other projects. 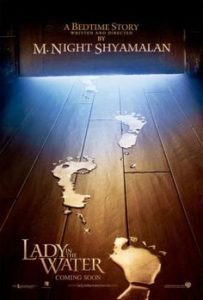 Paul Giamatti and Bryce Dallas Howard star in the fantasy film set in an apartment complex full of unique characters who each get their moments to stand out, thanks to some satirical dialogue and great casting choices. Giamatti is Cleveland Heep, the apartment superintendent with a stutter who lost his family when they were murdered. One night he discovers a pale girl named Story, played by Howard, swimming in the pool and she turns out not to be just an ordinary girl. This is where things get weird and some people get turned off. Story, as it turns out, is a being called a Narf who is trying to get back to her home of the Blue World, while trying to avoid the Scrunt, a dog like monster who blends in with the grass that wants to kill her. While there are law keepers who make sure rules are in check, Story seeks the assistance of the tenants to keep her safe until she can make her journey home. 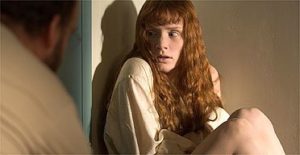 On top of that, Story finds her place in our world as she learns her purpose in inspiring those are help protect her. Heep finds closure in assisting Story as the blame he continues to burden himself from his family’s death is killing him inside (this is presented with a beautiful monologue spoken by Giamatti in a terrific scene). Other characters find their purpose, but what stands out the most for many is the soon to be great writer, Vick Ran, who has been working on something called “The Cookbook.” Apparently, his book is what inspires future leaders to help create positive changes in the world and Story must ensure that he doesn’t give up his writing aspirations. 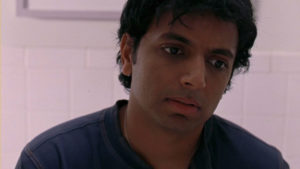 It’s not Ran’s story that gets to some viewers, but the fact that Ran is played by Shyamalan himself. Already rumored to be a writer/director with a bit of an ego problem (which was documented in a book about the production drama of LADY IN THE WATER), casting himself as the greatest writer of our time did not help things. Ran’s insecurity about his ability to be a successful writer begins as something many can relate to quickly shifts gears as soon as Story communicates her prophecy and he sees himself as some kind of martyr before anything is published. The creative differences involved behind the scenes of this movie were highly publicized at the time and elevated LADY IN THE WATER to be viewed as some kind of vanity project, a cinematic experience to show the world Shyamalan’s greatness.

It’s been over ten years since its release and the movies aren’t being shuffled out as they once were for the director. After the negative reactions to this and THE LAST AIRBENDER, it was decided for marketing purposes to remove his name from the advertising for AFTER EARTH, the Will and Jaden Smith science fiction survival story. What I’m curious about is what conversation was had in that conference room to come to that decision. The mere mention of his name could get people to buy tickets, but the association was avoided this time around. With the unexpected success of THE VISIT in 2015, fans believe this could be the beginning of a creative resurgence for the director as he returns to the genre that made him a household name. 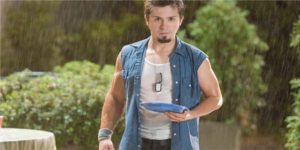 It’s the new success that I feel should encourage skeptics to revisit LADY IN THE WATER. I completely understand why people hated it the first time around and the timing of the release probably didn’t help. You have the guy known for making genre movies with twist endings releasing a summer movie that doesn’t follow any of the formula fans are familiar with. There’s an expectation that comes with movies like this, and it failed for many. Once that initial viewing is over with, it’s clear this is nothing like his other projects, whether you like it or not. It does, however, deliver an emotionally uplifting story of the underdogs who felt small in a world too big to conquer and there’s actually quite a few really funny moments throughout. That vanity project many complained about is actually a bit self aware and Shyamalan is not afraid to poke fun at himself or the critics who loathe him. Accompanied by James Newton Howard’s haunting score and unforgettable performance by Giamatti, LADY IN THE WATER is an original cinematic fable that serves as a great conversation starter.