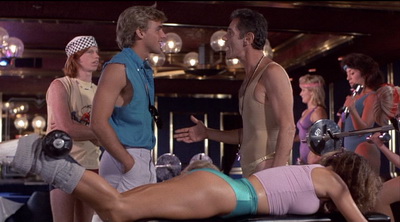 To be honest, HARDBODIES is not a movie I think about all too often. It’s a good example of the kind of movie I think about if somebody mentions “softcore movies” (whether or not it even counts), but outside of that designation there’s really not too much to engage the brain here. I’m not even positive I’ve seen it all the way through, if you know what I’m getting at. Maybe you can relate. Or it might be a generational thing. 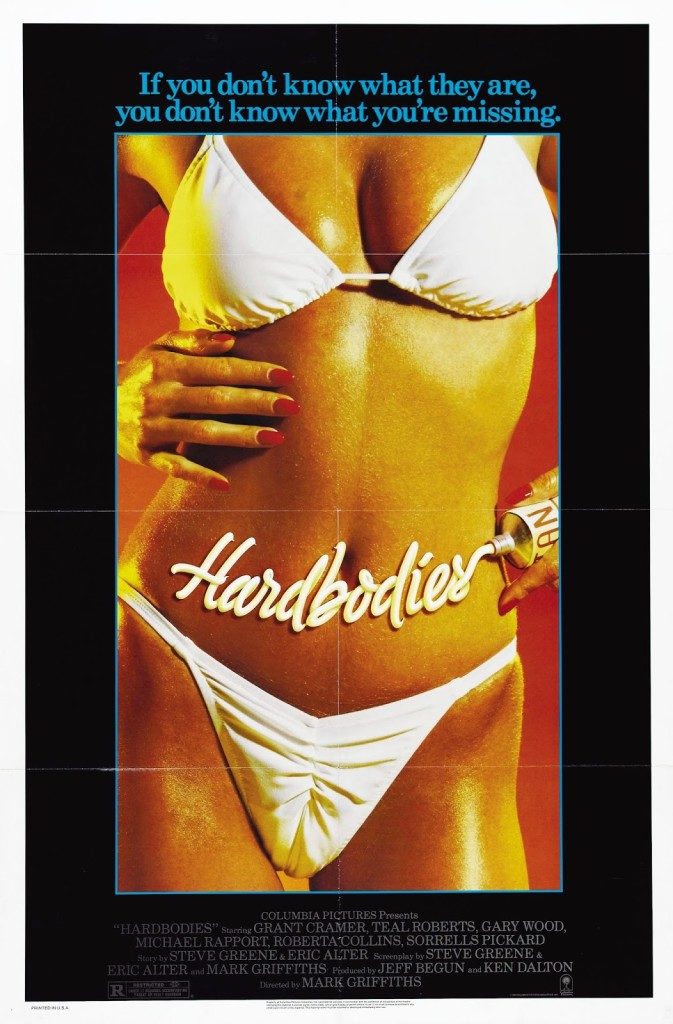 If you’re any older than me, you might never have encountered a movie like HARDBODIES. And if you’re younger than me, my guess is that the internet has so revolutionized and specialized your movie-watching experience that you’ll have no idea what I’m talking about. Nowadays, you can watch almost any movie you want at any time of day, even wherever you are. You have more choice than ever before, but in a way, it narrows your view — you’re headed straight towards the movie you have in mind. There are less accidents, fewer stop-overs. My generation is made up of channel-surfers. We grew up with a remote control in our hand, sometimes a TV Guide (print edition) in the other. I’m old enough to just barely remember what things were like before the internet changed everything, but still young enough to have adapted. Cable was my first source of movie exploration. HBO. The Movie Channel. USA.

I was never looking for a movie like HARDBODIES. I wanted to see GHOSTBUSTERS or BIG TROUBLE IN LITTLE CHINA or any movie anything like them. But, you know, there’s puberty. That’s a thing that happened to me, when I was least expecting it. So it got to a point where if I was flipping TV channels, late at night, and I saw a pair of boobs, I’d have to stop and take a look. Those things didn’t pop up as often in the kinds of movies I owned and rented and went to the theater to see.

So that’s the value of a movie like HARDBODIES. Pre-adolescent ogling, and that’s about it. It’s amazing now to consider that it came out of a major studio (Columbia), but then that’s American cinema in the 1980s. [Wikipedia claims the movie was originally made for the Playboy Channel, and only distributed by Columbia, but that still says a whole damn lot.] Whereas mainstream movies in the present decade are more often than not a weird combination of children’s source material and relentless violence, mainstream movies back then at least offered up juvenile visions of sex to balance out all the sci-fi and action flicks. Quite frankly, there were titties as far as the eye could see in the 1980s, or at least it seemed that way. 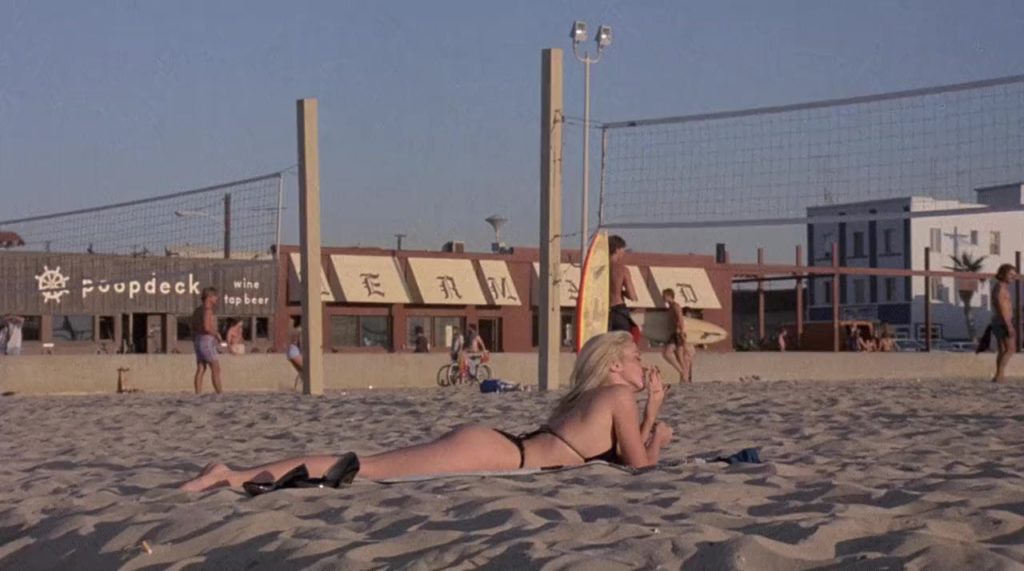 Anyway, let me step down from my sociopolitical soapbox. (The ‘sociopolitical soap’ is found in the less-trafficked area of Bath & Body Works.) I don’t have much personal fondness for HARDBODIES. As an adult, I wonder how it even happened once, let alone earned a sequel. It’s easier to accept a movie like PRIVATE SCHOOL, a straightforward ’80s sex comedy about horny guys crashing a girls’ school, which is leering but generally leering in the manner of a teenage boy. HARDBODIES leers like a grown man, which is a ways creepier. Here’s a summary of the movie from the last time it played at Nitehawk Cinema here in New York City:

When three divorced men on a vacation in California realize that their fancy beach house and cars can’t get them the one thing they want (to get laid!), they hire a young man known for his way with the ladies. In exchange for his ‘dialog’, he gets to stay at their fabulous abode but when this playboy actually falls for a girl, well, then things get a little nutty. With its cheesy one-liners, Valley Girl speak, big hair, boom-boxes, and outlandish hijinx, HARDBODIES epitomizes 1980s sex-comedies, and is best to see late night on the big screen.

So there’s the difference, and it’s a big one: Where most 1980s sexploitation comedies focused on teens lusting after other teens, HARDBODIES centered around old guys chasing after hot young things. Kinda gross. In fact, I remember being a bit disturbed by the trio of old dudes in the movie: No offense meant but they look kinda like monsters, and they definitely lack the charm of, say, a Rodney Dangerfield in BACK TO SCHOOL which might’ve balanced out the visual discrepancy. There’s definitely a Tobe-Hooper-directed version of this movie out there in an alternate universe. 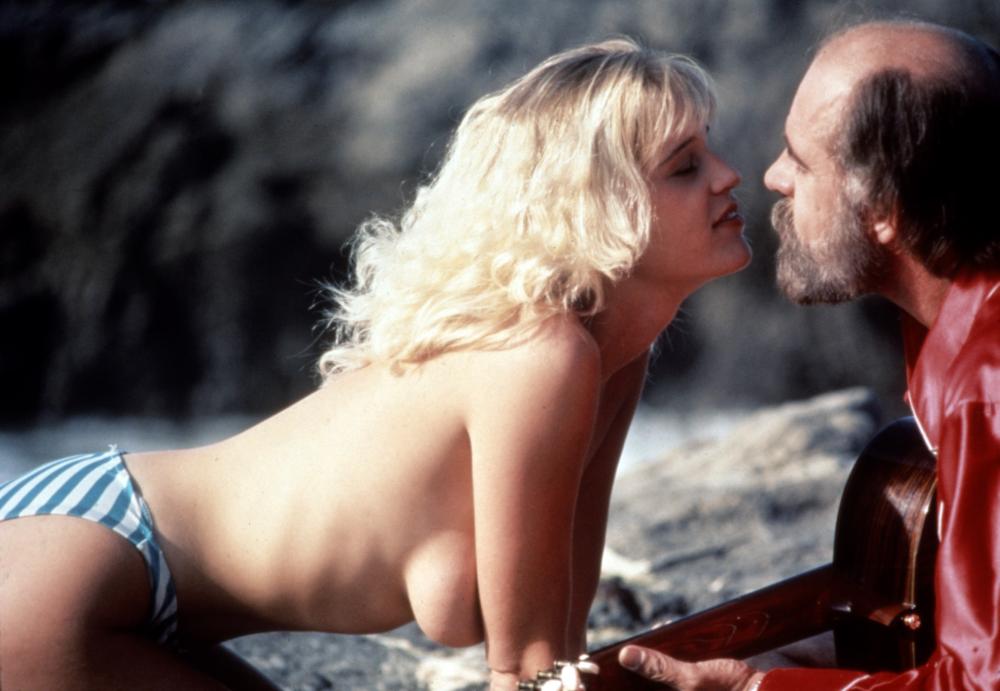 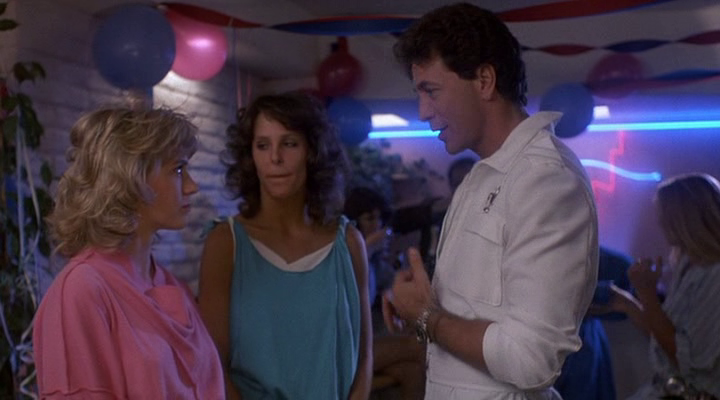 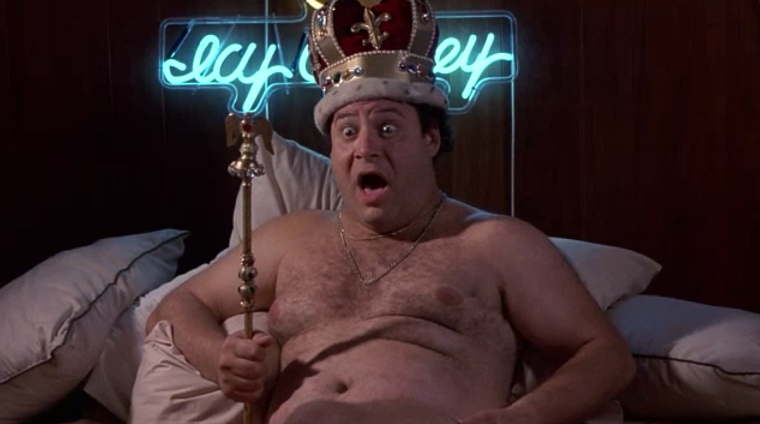 Grant Cramer, who later starred in 1988’s KILLER KLOWNS FROM OUTER SPACE, plays the young stud character and the movie’s main ‘romantic’ protagonist, but he’s a little too studly here to root too hard for — it’s like pulling for William Zabka to get with Elisabeth Shue over Ralph Macchio.

But forget about relatable protagonists. If you’re coming to HARDBODIES for gratuitous and lingering shots of bikini-bound and -unbound cleavage, with a chaser of goofy slapstick, then you will not leave disappointed. Again, for the younger generation, who now lives with porn ever-ready at the end of an arm, you have to understand the era: this is the best some of us could get for a while. Believe me, I have more Judeo-Christian angst and revulsion over the objectification of young women (and their defilement by ogres) than anyone, but even for a sensitive poetic sort like myself, there’s biology to contend with. The heart wants what the heart wants, but it ain’t the only part of me that lives life that way. 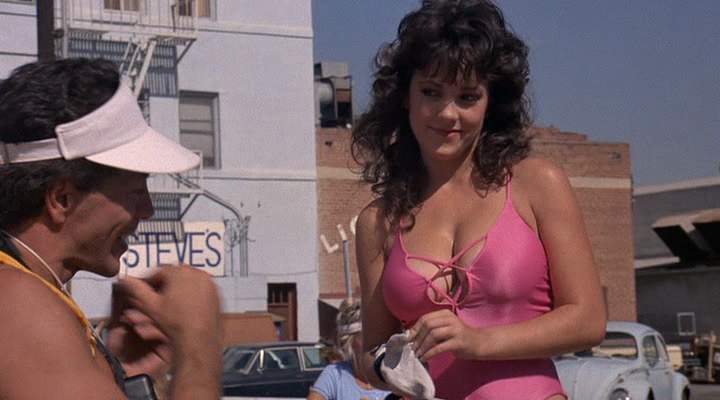 So I didn’t not notice, as a preteen, that HARDBODIES features a young woman named Darcy Demoss, who you’d also have seen in JASON LIVES and CAN’T BUY ME LOVE. A very pretty lady, not averse to toplessness, who attacks all these meaningless sex-object roles with a certain enthusiasm. A brunette in a world of blondes. Her scenes I remembered. The rest of the movie I didn’t really bother to store in my cranial hard-drive, but this particular highlight reel I did. Maybe that’s oversharing, but what good am I to you if I’m not doing my best to be truthful? 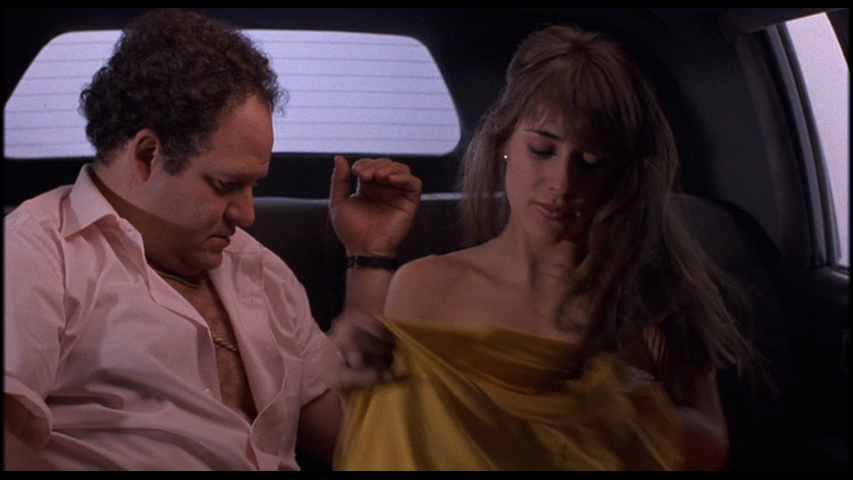 HARDBODIES is also a place to get your Courtney Gains fix, if that’s your 1980s demi-icon of choice. He was in CAN’T BUY ME LOVE too, but he had my heart from Joe Dante’s THE ‘BURBS, and Rob Zombie’s too it seems, as there was the cameo in HALLOWEEN. And, randomly enough, Dwayne “The Rock” Johnson’s FASTER, which is proof that the character actor’s career odyssey is generally far more eclectic and interesting than that of most mainstream stars. This dude is the bridge between Michael Myers and The Rock (in another era, Michael is a role Dwayne could have played) and for that reason alone, respect is due him. 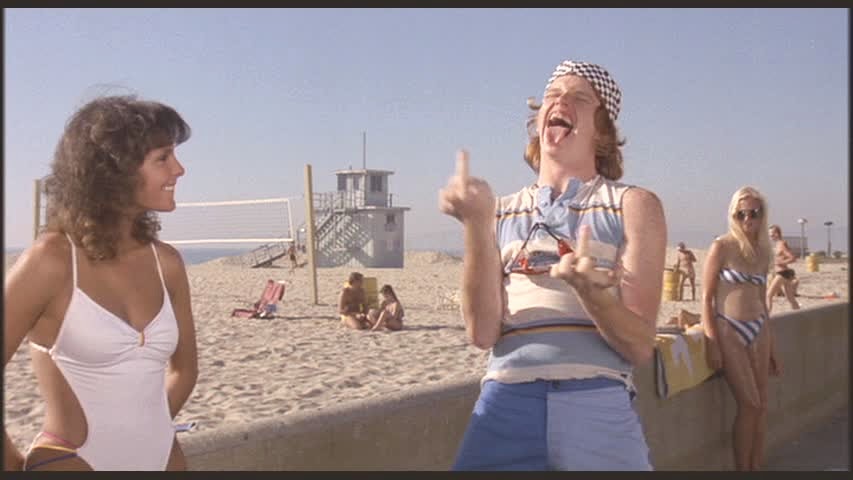 I haven’t seen even a minute of HARDBODIES II so I can’t speak to that, but if you want to see where the saga began, you should definitely see HARDBODIES I. For those of us who appreciate the great arts of cinematography and editing, there’s absolutely nothing here of interest, but as a snapshot of California beach culture at a certain point in time — or maybe just a horny old guy’s idea of such — it does have its value. By definition it’s not the kind of movie that has ever been watched too often with a crowd, and I can’t possibly imagine what the ‘woke’ Twitter generation might make of it, but be all that as it may, it still lives somewhere in the seedy corners of my memory, like a lifelong case of genital herpes, only in the form of a movie. 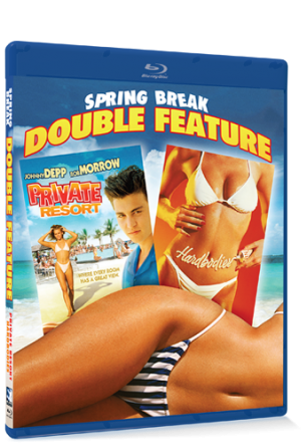