Like many movie nerds of a certain age, STAR WARS has been a part of my life since I can remember. One of my earliest memories is seeing A NEW HOPE with my parents at the Ben Hur Drive-In in Crawfordsville, Indiana (now long since demolished). I saw THE EMPIRE STRIKES BACK and RETURN OF THE JEDI at two other movie theaters in Indiana that don’t exist any more, too. The prequels happened and I still haven’t been able to bring myself to watch the second one for some reason. But when THE FORCE AWAKENS was released last year I was skeptical of what I’d just seen for about 20 minutes before the old magic grabbed me all over again. Still, I was wary of Disney’s plan to crank out a new STAR WARS film every year forever, and while I was intrigued by the concept of ROGUE ONE I tried to remain no more than cautiously optimistic.

As it happens, the film damn near exceeds the impossibly high expectations set by its stunning trailers. Whereas THE FORCE AWAKENS felt like a natural extension of the original trilogy, ROGUE ONE remains a STAR WARS film at heart while presenting a very different look at the universe in which the films take place. It’s considerably darker than any of the previous films, and while it’s not always exactly “fun,” it’s also not overly somber or bleak. It delivers what one expects from a STAR WARS film while staking out its own territory. Director Gareth Edwards has set one hell of a high bar for future “STAR WARS Story” films. 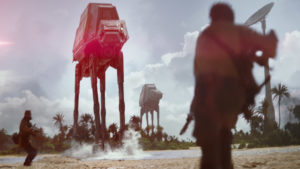 As the film opens, Imperial Director Krennic (Ben Mendelsohn) has finally tracked down runaway scientist Galen Erso (Mads Mikkelson) to the remote planet where Erso lives with his wife Lyra and young daughter Jyn. Krennic demands Galen return with him to continue work on a top-secret weapons project, but Jyn manages to escape Krennic’s troops and flee the planet thanks to Galen’s friend Saw Gerrerra (Forest Whitaker). Fifteen years later, Jyn (Felicity Jones) is in an Imperial work camp and Saw leads an extremist splinter group working outside the Rebel Alliance’s authority. Bodhi Rook (Riz Ahmed), an Imperial cargo ship pilot, has deserted his duties and delivered a message to Saw that the increasingly desperate Alliance needs to see. They send Cassian Andor (Diego Luna), his android sidekick K-2SO (voiced by Alan Tudyk) to break Jyn out of prison in hopes of getting an in with Gerrerra to once again join forces against the Empire. 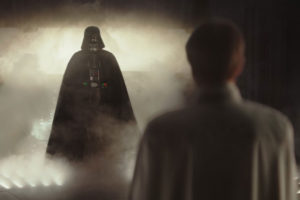 While all the previous films in the series have focused on the Jedi, there are no Jedi characters in the world of ROGUE ONE. Instead, it tells the story of the guerilla troops on the ground and in the trenches of the impending war between the Empire and the Rebel Alliance. There are no lightsabers in their arsenal, and except for true believer Chirrut Imwe (Donnie Yen), hardly anyone talks about The Force other than to say “May The Force be with you” as a standard wish of good luck. In the years between REVENGE OF THE SITH and this film, Darth Vader (James Earl Jones reprising his iconic voice role) has succeeded in virtually wiping out all memory of the Jedi. The Alliance has had to resort to morally questionable actions in order to gain a foothold in their conflict with the Empire. 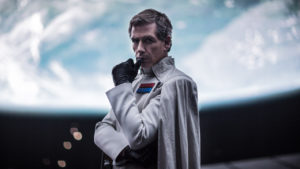 Perhaps the most surprising thing about ROGUE ONE is that it doesn’t shy away from this facet of the struggle, but despite the grimly desperate nature of this galaxy-wide conflict writers Chris Weitz and Tony Gilroy wisely focus on a small group of characters who band together to undertake an impossible mission. Felicity Jones is great as the cynical, angry Jyn, although her conversion to Rebellion true believer feels a little rushed. The cast is uniformly great, but the show truly belongs to Ben Mendelsohn as Krennic and Alan Tudyk as the voice of K-2SO. Mendelsohn was clearly born to play the role of relentless Imperial officer, making Krennic a memorably villainous character. K-2SO provides much of the film’s welcome comic relief, but it’s far from the bumbling punchline C-3PO often was in the previous films*.

Despite rumors of trouble behind the scenes and extensive reshoots, ROGUE ONE does not feel like a film that has seen too much tinkering. Even Michael Giacchino’s score—famously composed in a month after the film’s original composer left the project—is completely of a piece with the scores of the previous films. Giacchino took cues from those films’ familiar themes and gave some of them a slight twist, which is exactly what the screenwriters and director Gareth Edwards have done with the STAR WARS formula. As dark as it often is, ROGUE ONE tells a story not just of great sacrifices made in the name of a worthy cause, but one of hope. Andor tells Jyn that “rebellions are built on hope,” but he tosses it off casually. When she echoes the same sentiment later, it means something more to her and to the Rebels who join her mission. It may be a bit on the nose, but this is exactly the STAR WARS movie the world needs right now.

*Sort of not really spoiler, but if you don’t want to know anything at all you may want to skip this: There is one member of the cast whose appearance in the film was a complete surprise given some real-world circumstances that would absolutely guarantee this actor could not return to reprise the role. Since A NEW HOPE was 40 years ago, it goes without saying that some of the original cast is no longer with us, but ROGUE ONE brings one of them back through CG performance capture and voice rendering that is profoundly creepy. It gets a little better after the first scene in which they appear, but the lesson is clear: Someday we’ll be able to make movies where dead actors appear with live actors and we won’t be able to tell. We are not currently at that point, though, and instead this character lands squarely in the uncanny valley.