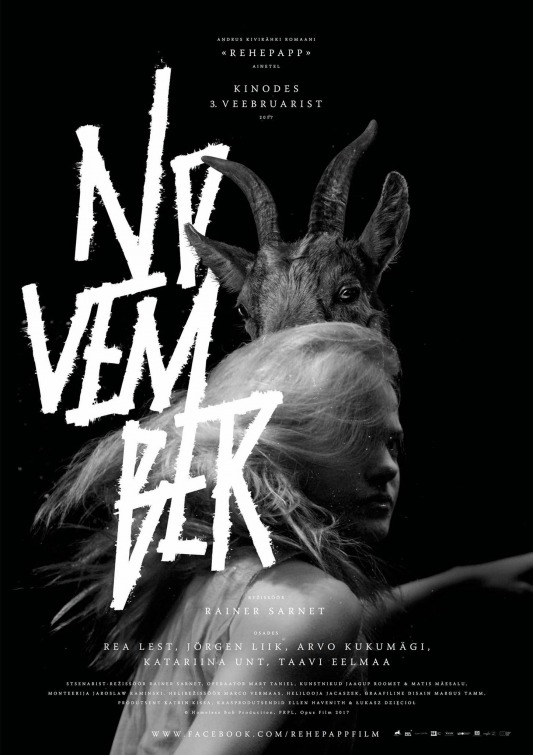 Rainer Sarnet is no stranger to philosophical head-trips; the writer-director adapted Dostoevsky’s THE IDIOT in 2011. His latest effort, NOVEMBER, is a stark fairytale that hearkens back to the Brothers Grimm stories before they were diluted through the Disney treatment.

Set in a 19th-century pagan Estonian village, the tale tells of villagers navigating a harsh winter besieged by wolves, disease, and the dead. Among them are three principal characters, staples of the classic fairy tale: a farm girl named Liina (Rea Lest), her handsome brooding crush Hans (Jorgen Liik), and a beautiful sleepwalking German baroness (Jette Loona Hermanis). Liina’s love for Hans is enough to unleash her animalistic side, and Hans’ love for the baronness is enough to spur him to spy and sneak his way into her quarters at night. Both Liina and Hans attempt to use pagan magic to reel in the objects of their desires. Indeed, a primal take-whats-yours attitude rules over the entire village: people steal whatever they covet from their neighbors and masters, including the Devil himself. Much like their Frankenstein’s Creature-like servants made of farm implements, called kratts, they are soulless and opportunistic. Souls are a coveted item in the village, a prized bargaining chip used in desperate midnight dealings with the king of the underworld. But the thievery and double-dealing that permeates every aspect of the villagers’ lives effectively dehumanizes them, making them no better than the labor-obsessed kratts they employ. The only sign of true life in NOVEMBER is true love, something that swirls furiously among its young central characters. It all serves to weigh work, worth, and love against one another on a grand, peculiar set of scales.

The film opens strong, with a frigid smattering of grays and whites depicting a harsh, surreal world. The muted palette does not diminish the film’s stunning visuals, courtesy of cinematographer Mart Taniel. Pairs of beady, frightened eyes peer into a night only lit by a ritualistic bonfire. A spirit clad in head-to-toe white rests against a massive tree trunk, imparting serene wisdom to a living relative. Thick drops of blood ooze through the pages of a Bible following a blasphemous pact. Sarnet’s monochromatic film is a steady stream of quietly disquieting imagery that provokes an emotional response, across all languages. Similar to the 2009 Bergman-lite socio-political allegory THE WHITE RIBBON, NOVEMBER’s use of long, static takes, rigid framing, and B&W photography adds a touch of realism to the story. But here, the layer of verisimilitude acts as a grounding tether to the fanciful plot that includes a talking wheel of scythes and a plague personified that can be fooled by villagers wearing their pants on their heads.

Based upon Andrus Kivirähk’s bestselling novel REHEPAPP, this well-deserved winner of the cinematography prize at Tribeca is a faithful adaptation of a story that leans heavily on Estonian folklore. So heavily, in fact, that the narrative takes on an unstructured feel with tangential interludes that are only related to the main plot in the loosest sense. These interludes could easily be titled, “The Plight of the Kratts” and “Dining With The Dead;” they vaguely share the main protagonists in their respective scenes, but only in the periphery. Rather than hurt the film’s pacing, however, this disjointed stroll through the bleak wilderness resembles an old stage play. Indeed, there are a series of segments interlaced throughout the plot that feature crossroads deals with the devil whose grimacing, grinning face fills the frame with exaggerated expressions like those of Japanese Keshi-wearing kabuki performers, and whose bombastic voice could carry his cries and taunts to the balcony seats in the Old Globe Theater. The bizarre shifts in seriousness from one act to the next (one moment we’re watching a heartbreaking love triangle, the next a man purchases a soul for his snowman) read like parts of a theatrical piece. North American audiences may not be used to it, but it’s certainly not a poorly told story by any means.

NOVEMBER makes for one of the more singular viewings you’ll have, in that its framework is unorthodox but its powerful imagery cannot be denied. Rainer Sarnet is comfortable in letting us stew in his strange brew of feverish mythology, ultimately making for a memorable viewing experience. 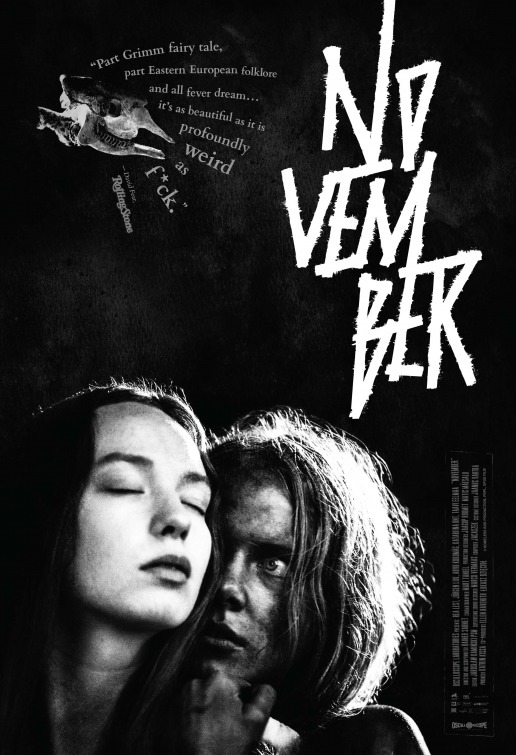