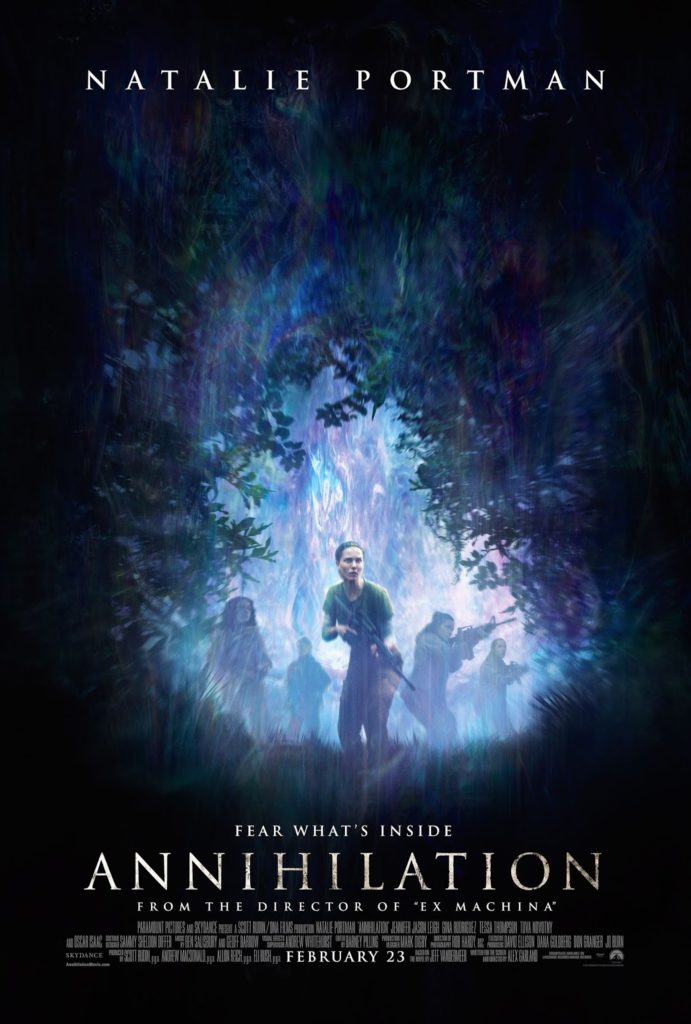 In a time where mainstream science fiction offers nothing but an oversaturation of bad-CGI, disaster-driven plots, and thinly-veiled characters, its refreshing to come across a film that is both high-concept and not at all pretentious – such as ANNIHILATION, the newest from EX MACHINA writer-director Alex Garland. Similarly to Garland’s last, ANNIHILATION is a science fiction film that not only explores original concepts, but also finds its roots in Kubrickian storytelling – all utilized to tell a cogent and absorbing story that asks more questions than it answers.

We meet Lena (played by a convincingly tormented Natalie Portman), a biology professor in mourning for her military husband, who has been unheard of since his most recent mission – until he isn’t, mysteriously showing up in their kitchen one night. Kane (a sickly Oscar Isaac so mundane and zombified that it’s impossible to believe that he shot his scenes the same day he shot his charismatic performance in THE LAST JEDI) is questioned by Lena, who is both ecstatic and confused at his unannounced arrival home. After responding with only “I don’t know” to her questions, Kane falls ill and the couple is whisked away to a government facility that we later learn to be deemed “Area X.”

While Kane, now unconscious and dying, is being carefully watched over by a medical staff, Lena is determined to find some answers to the source of her husband’s previous disappearance and now illness. She confronts psychologist Dr. Ventress (a seemingly stoic Jennifer Jason Leigh) who explains the extraterrestrial phenomenon dubbed The Shimmer, a mysterious glowing field that has been expanding in size for the past three years. Dr. Ventress – determined to find the source of The Shimmer after years of sending military troops in with no survivors – accompanies herself with a team of all-female scientists as they plan on heading in and figuring out the cause of this unexplainable entity. Lena, after learning that this is the cause of both her husband’s absence and sickness, finds herself enlisting in the mission as well.

Led by Dr. Ventress, the diverse squad of women, packed heavily with supplies and weapons, head deep into The Shimmer. Propped up by their hefty credentials, each woman creates a deep presence through their performances. Anya Thorensen (played by Gina Rodriguez, charming in Jane The Virgin, thus showing her versatility in this very different role), Josie Radek (a sedated Tessa Thomson), and Cass Sheppard (played by Swedish actress Tuva Novotny in a stand-out performance) enter into The Shimmer and are determined to face things practically, without disorderly behavior, as scientists would. These women, all referred to as “damaged goods” are each allowed fleshed-out arcs. As the film progresses, we learn specific details about each character (especially with Lena) and the inner-demons they’re forced to face (or run away from). This is only one of many ways Alex Garland implements a layered narrative into his screenplay. Written with precision, Garland doesn’t let one line of dialogue go to waste. When studying the subtext of the film, everything can and should be taken into consideration – giving this film an immense amount of rewatchability. Garland utilizes a non-linear storyline, narrated by a dazed, post-mission Lena, that edits around three (or four?) different periods of time. By allowing this story to unfold in this unconventional way, this dialogue and information-reliant film never feels over-bearing or too expositional. We, as an audience, either learn things as the characters learn things, or learn things as the characters remember things. Each scene in the film answers just enough questions to keep audiences satisfied, and asks just enough questions to keep them on the edge of the seats. In contemporary sci-fi, the balance between intellect and narrative satisfaction is hard to achieve, and ANNIHILATION uncompromisingly nails it.

As precisely directed as it is written, ANNIHILATION is elevated by every possible factor of filmmaking nuance. Alex Garland creates an intoxicatingly beautiful, yet terrifying environment inside and outside of The Shimmer – utilizing masterful cinematography, soul-shaking sound design, and nonsequential editing to deliver the film’s fascinating narrative and the inevitable equivocal subtext. Cinematographer Rob Hardy, having worked before with Garland on EX MACHINA, shoots the physical environments beautifully, as if in a way of appreciation and ignorance to the terror that lies behind the elegance. At multiple points throughout the film, Hardy decides to shoot through screens, sheets, and even a glass of water in attempt to mimic the visual aesthetic of The Shimmer in every frame. He also favors shots through doorways and trees; as well as a few gut wrenching, look-away-tempting sequences shot on a camcorder being watched by the team of women. This voyeuristic style allows the audience to look in on the characters on screen – as it parallels with the characters looking existentially in on themselves. Elevated by a score (best described as temperamental) composed by Geoff Barrow and Ben Salisbury, the foreign nature of The Shimmer becomes unnerving and anxiety-ridden. Using these core cinematic techniques, Garland allows the audience to experience the contrasting aspects of the story and the environment along with the characters.

While ANNIHILATION is very obviously a technical marvel, flourished with praise-worthy work behind the camera and in the editing studio, the heart of this movie lies within its humanity. And isn’t that what makes a great science fiction film? Look at EX MACHINA, ARRIVAL, and even BLADE RUNNER 2049: each film is cored with human characters with flawed pasts, wavering beliefs, and believable motivations. Whether or not this film is widely palatable to all audiences – too intelligent for some, too highbrow for others – Alex Garland crafts a film that so carefully studies the course of humanity, what it means to have regret, and the cost of sacrifice. Honestly, the subtext is left for audiences to determine on their own, and while that isn’t the most pleasing nor narratively satisfying experience for general audiences, its a challenge well worth it; walking out of the theater inescapably more thoughtful than 115 minutes prior.

ANNIHILATION is now in US theaters and will be internationally released on Netflix on March 12th.