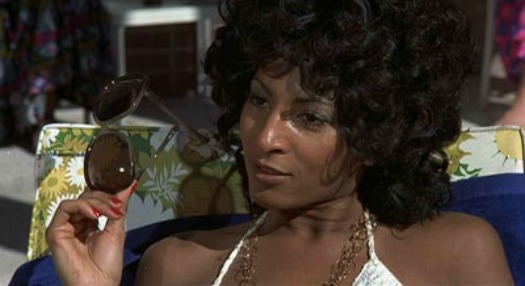 Hill’s passion for film started at a young age thanks to his father who was a set designer for Disney. He caught the bug of the bright lights and eventually ended up working for Roger Corman… don’t they all. He directed scenes for DEMENTIA 13 and THE TERROR, he even returned to work for Corman following SPIDER BABY (and a few adult films he photographed) with PIT STOP. His films seemed to be plagued; when his financiers weren’t goin bankrupt (SPIDER BABY) he was having post-production issues (PIT STOP). Despite the quality of the films, they weren’t finding there way to the screen. Enter Pam Grier, the Queen of Cool, an icon in the making.

Hill’s first film to hit big was THE BIG DOLL HOUSE (1971), another smart script and a badass joint with tough chicks and cool action. Stealing ever scene she was in, Grier would join Haig as a Jack Hill staple. Together they would also make THE BIG BIRD CAGE, COFFY, and FOXY BROWN. Greir was bound to be a star, but it’s fair to say it was Hill’s films that made her the icon she is today.

Hill’s last great picture, SWITCHBLADE SISTERS, seemed to take the long road to the fan favorite status it enjoys today. It tanked at the box-office and sat in near obscurity until Quentin Tarantino came along and picked the flick up for his Rolling Thunder Pictures. With a theatrical re-release, a proper DVD release, and the blessing of Tarantino, new fans were found and those that dismissed the film on its first run had to admit they were assholes. Like a lot of his work, SWITCHBLADE SISTERS was going to be a hit someday, it just took its sweet as time to get there just like his other films.

Hill has made some of our favorite films. After a weekend of doing a COFFY/FOXY BROWN double with some JACKIE BROWN on the side, we thought we would toss up a tribute to the director that has given us all kinds of cool over the years. So enjoy…