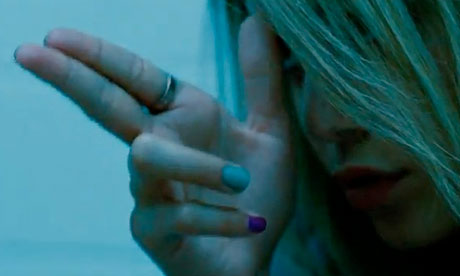 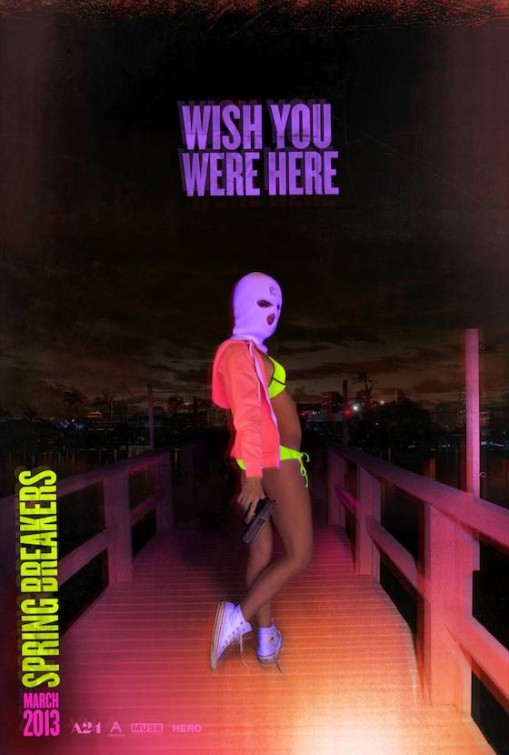 However you end up feeling about it, you’d have to agree that SPRING BREAKERS is the most unusual mainstream feature film to hit malls and multiplexes since DJANGO UNCHAINED. Part exploitation movie, part art movie, all provocation, it’s a movie where Werner Herzog meets John Cassavetes meets Jack Hill, and the fact that most of the people who are talking about this movie couldn’t name any of those directors only underlines how bizarre and kind of awesome it is that SPRING BREAKERS is enjoying such a high-profile cultural moment.

The writer and director of SPRING BREAKERS is Harmony Korine, a forty-year-old filmmaker who I can’t honestly say I’ve had much of an interest in before now. His first project was writing 1995’s notorious KIDS for director Larry Clark. The best thing about KIDS, in my opinion, is that it gave the world Rosario Dawson. Otherwise, it’s not a thing I plan to revisit, ever. Korine went on to make music videos, photography, and a series of films, including GUMMO, JULIEN DONKEY-BOY, MISTER LONELY and TRASH HUMPERS, that certainly have their followings but didn’t draw my attention. They all looked too purposefully skuzzy, sleazy, arty, or unruly to me. No offense. That’s just not my taste. Personally, I like nothing better than mainstream genre films with a triple-sized side of subversion. I like a Sam Raimi horror film. I like a Joss Whedon superhero movie. I like a Quentin Tarantino Western. I like horror films and crime flicks and monster movies, and I really, really like it when those styles and story types mix and match. I love a genre-blender. So I’m almost taken aback by how long SPRING BREAKERS has lingered in my mind. 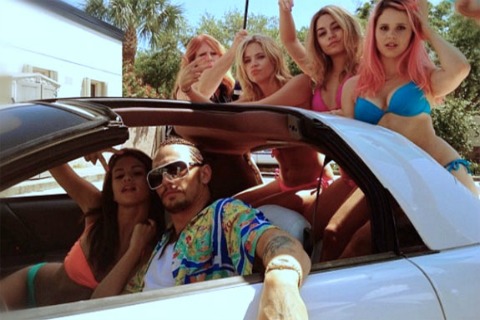 If you’re the scholarly type, SPRING BREAKERS can’t help but call to mind that oft-cited Godardian maxim, “All you need for a movie is a girl and a gun.” But this movie couldn’t have happened in France.  This is all us.  Add “America” to that girl + gun checklist and you have SPRING BREAKERS. The main characters here are four college girls who are dying to make a pilgrimage to Florida, America’s spring break mecca. All of the characters are splashed in the broadest possible strokes. Faith (Selena Gomez from Disney’s “Wizards Of Waverly Place”) is the most innocent, a God-fearing good girl who has to be persuaded away to join the debauchery by her wilder friends, Candy (Vanessa Hudgens from Disney’s “High School Musical”), Brit (Ashley Benson from ABC Family’s “Pretty Little Liars”), and Cotty (Rachel Korine, the director’s wife). Brit and Candy, in particular, are described by Faith’s youth-ministry pals as having “devil’s blood.” The two of them are first seen drawing dicks in their notebooks during a college lecture. Whereas this kind of behavior is par for the course in a movie like SUPERBAD, it’s shocking here for two reasons:

1) Young men are expected to draw dicks in their schoolbooks in college movies. It’s just not considered the ladylike thing to do.

2) This is an epic achievement in stunt casting.

While they may or may not be huge stars in your household, to a certain demographic Selena Gomez, Vanessa Hudgens, and Ashley Benson are tremendously, ridiculously, obscenely famous. They got that way as part the Disney Channel/ABC Family farm team. (It’s all part of the same Disney-owned multimedia conglomerate.) These are teen-idol actresses known for thoroughly G-rated personas, being plunged into an onscreen bacchanalia pushing the boundaries of a hard-R. This is like if Annette Funicello were cast in Fellini’s SATYRICON. The most comparable precedent is Elizabeth Berkeley from TV’s “Saved By The Bell” starring in Paul Verhoeven’s SHOWGIRLS; only, any one of the three lead actresses in SPRING BREAKERS is far more well-known right now than Elizabeth Berkeley ever was. 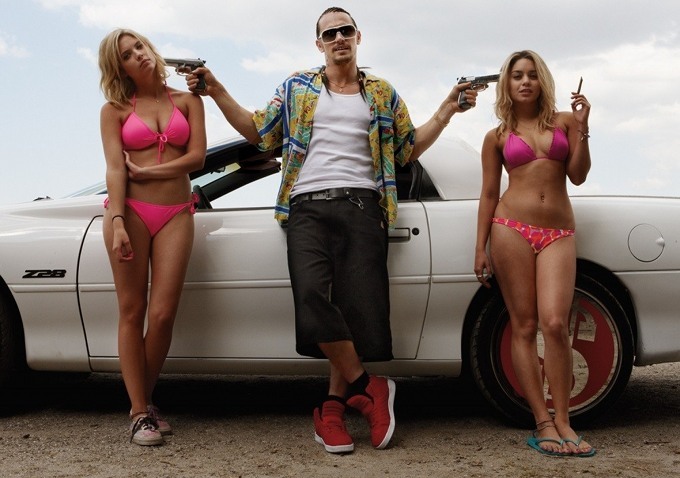 Before arguing for or against the movie’s worth, it has to be said that all three stars do bold, brave work in SPRING BREAKERS. I have to admit that Vanessa Hudgens is the only one I’d ever seen act before, in Zack Snyder’s SUCKER PUNCH (another teen-girls-in-trouble sexploitation fantasia), but I was impressed by all of them. None of them had to make this movie. Some critics will argue that none of them should have made this movie. But since they have, it’s only fair to note that it’s a big risk for a mega-celebrity to dangle their onscreen personas this far over the flames, and that each one of them is entirely convincing in every scene they’re asked to play. Obviously, Selena Gomez, as the conflicted Christian of the group who eventually smartens up and flees from spring break hell, gets off relatively easy, and it’s arguable that the most dangerous moments – the nudity, most of the sex scenes – are carried out by Rachel Korine, since she has less of a reputation to risk. It’s kind of like how Johnny Knoxville would let Steve-O and Ryan Dunn do most of the craziest stunts. But Ashley Benson and Vanessa Hudgens, in particular, deserve a ton of credit for brash, daring, infuriating performances that are all the more astonishing given how much they have to lose. If you have a problem with the movie, it shouldn’t be with the actors.

It’s clear that SPRING BREAKERS is a divisive film. Whether or not one believes it is successful depends on the way in which one interprets the objectives of the filmmakers. Did Harmony Korine make this movie because he’s a creep? Was it all a ruse in the pretense of art and cinema and all he wanted was to ogle these young girls in bikinis? Does he get off on watching cute barely-legal pop stars making out and firing guns? Or is his camera’s gaze more objective? Is he shining a light on the most reprehensible, date-rapey aspects of spring break culture? Is the fact that in the final act, (SPOILER) Brit and Candy become gun-wielding Bonnie-and-Clydes (or Bonnie-and-Bonnies) meant as a feminist revision, turning the two of them into lady terminators, avenging themselves upon the objectifying elements of hip-hop culture? Or is the entire thing meant to be satirical? Is fun being poked at the young religious types who shirk their calling every spring in order to run to Florida and do tequila shots? Is the target those braided, grille-sporting affluent white kids who have absorbed hip-hop as if it were their birthright? If SPRING BREAKERS is a documentary, is it the Michael Moore kind – impassioned, argumentative – or the National Geographic kind – detailed, completely impartial? Or – is it the Werner Herzog kind – quizzical, curious, non-judgmental, outsider-looking-in?

I’m not actually here to answer any of those questions. I think what makes SPRING BREAKERS such an interesting work is that it may easily be all of those interpretations at once, as much as any one of them. One signifier, in my opinion, is the presence of James Franco, who plays Alien, a party rapper and smalltime drug dealer who bails the girls out of jail when they are picked up for minor offenses, and then becomes a kind of mentor to some and all of the four. Alien is the film’s signature character, a greasy, badly-tattooed, cornrow-wearing whiteboy with a gold grille who is both deplorable and inimitably comical. I hated the character as much as I loved the performance.

James Franco is becoming a real outsider/insider artist on the level of John Cassavetes, who made movies like THE DIRTY DOZEN and ROSEMARY’S BABY so that he could finance his passion projects. Franco occupies a strange place in current pop culture: beloved by many for being a part of TV’s “Freaks & Geeks”, funny enough to star in a movie like PINEAPPLE EXPRESS, mainstream enough to headline a huge-budgeted OZ movie, gifted enough to carry off a movie like 127 HOURS – yet often derided for his extra-curricular pursuits such as experimenting with fiction, poetry, performance art, and live theater. It’s one of those bizarrely hypocritical stances people don’t notice they take – we make fun of Kim Kardashian for being famous for nothing, but we also make fun of a guy like James Franco, who is famous for good reason yet also wants to use the opportunity to try everything. Not every Franco venture is going to be successful, but let’s give the guy some room for experimentation, I say. Especially if it yields a sui generis performance like this one, where he is barely recognizable yet completely unforgettable. If good screen acting is making an audience forget who they’re watching and just accept a character as reality, then this rates among the finest screen acting of the year so far. Alien is an abhorrent creation, a white-trash appropriator who lives a life of excess and low-class, steals both literally and metaphorically from his one-time friend (real-life rapper Gucci Mane), and indulges in a perverse, enabling relationship with a couple of the Spring Breakers. He’s the only father figure this movie even comes close to offering up, and as such is a resounding disappointment. I’d call Alien a monster, but that term implies a level of respect for the amount of destruction he causes. And I don’t respect Alien, or any of the real-life characters who resemble him.

However – that is me, passing judgment as an active viewer of this film. Someone else might watch SPRING BREAKERS and feel ennobled by Alien and what he does to and for the girls in the movie. I’m not sure that my interpretation is the intended come-away. Personally, I watched SPRING BREAKERS and I thought of two movies – Michael Mann’s MIAMI VICE and Alexandre Aja’s PIRANHA 3D. It reminded me of MIAMI VICE in Benoît Debie’s roving, documentary-style, hand-held, neon-drenched camerawork, and it reminded me of PIRANHA 3D in that I kept waiting for giant mutant piranha to show up and eat every last goddamn person in the movie. 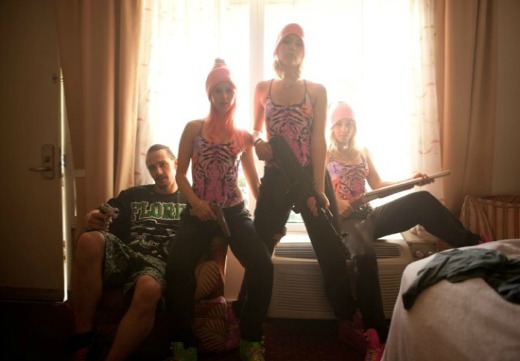 I find that interesting, and revealing. I hope that the very vocal critics of this movie will calm down and take another look. Maybe the perspective of this film is more moral than it will ever get credit for being. I can honestly attest that, for all of the rampaging sexual activity depicted onscreen, SPRING BREAKERS is hardly an erotic experience. On the contrary. SPRING BREAKERS has an anti-sexual effect. For me, as an adult heterosexual male with a reasonably healthy sex drive, I didn’t watch this movie with a Cro-Magnon hard-on. I watched it constantly hoping that these girls would grow up and read a book. (Maybe more than just the one, if you get my drift.) I hated them, but I didn’t blame them, not the way I blamed guys like Alien.

Spring break in America looks at young women like pieces of sex, to be objectified and abused and discarded. SPRING BREAKERS depicts this truth honestly, whether or not its gaze is lurid and masturbatory or investigative and altruistic. Even if your personal reading of the film is that it’s guilty of being part of the exact same problems it depicts, that would still make it worth talking about. But if its goal is to shine a light on a venal, shallow, misogynistic culture that deserves to be eradicated, then it is a movie that deserves a little more respect.