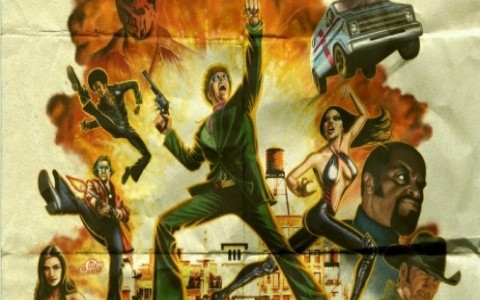 Sometimes, all kinds of cool just floats into your inbox and smacks your nuts with the kind of crazy that leaves us begging for more. And HOT LEAD HARD FURY is our kind of jam; all buttered up with the stank of the grindhouse and plenty of bullets, broads, and boobs to spare. This project is on the clock at Indiegogo but we’re just now learning about it so we wanted to see what we could do about getting some cash over to this wicked crew to see if they can make this flick fly.

So if you can spare a dime, we know a few dudes who could use it. Check out this trailer and the press release below, and then head on over to Indiegogo to part with some green if you dig what’s on your screen. This shit had us smiling ear-to-ear so hopefully this project happens.

March, 2013, Denver, CO: Oh Babies!!! If you’re not yet ready for <i>Hot Lead Hard Fury’s</i> cinematic thrill-ride, then buckle down, because it-is-happening!!

This gritty, hard-boiled tribute to the legacy of 1970’s film genres such as Italian crime, kung-fu, police action and “blaxploitation” is taking shape with a new funding campaign on Indiegogo in March.  And as if wrapping up all these delicious genres in one movie was not tasty enough for you- perhaps the fact that it will be shot on Super 8mm film will make you drool with anticipation!   It is the story of legendary kung-fu cop Chuck Beefer’s harrowing rise from a grisly deathbed and his blood-spattered quest for revenge against the ruthless drug dealers that nearly took his life.  At a towering 6’8” he is the tallest, beefiest, karate-kicking badass to hit the screen since Kareem Abdul-Jabbar took on Bruce Lee in the legendary “Game of Death!

Hot Lead Hard Fury is directed by Denver based M Van Michaels, director of Gears, Grease and Guitars and Motor Vixens, both of which have spawned cult followings within their respective genres.   The film stars Jesse Frazier, who when he’s not kicking ass as Chuck Beefer, is an artist and musician specializing in mixed-media retro-culture art, and soulfull sixties style garage rock. The unhealthy and downright abnormal love affair they share with cult and b-movies led Van Michaels and Frazier to the conception of Hot Lead Hard Fury. These two have put together an impressive group showcasing some of Denver’s finest talents:  Two-time martial arts gold medalist and actor Christophe Clark (Tiger Street, Little Bear and The Master) puts the “kung” in the kung-fu for this film, as does martial arts expert and filmmaker Mark Grove.  Mark also doubles as the Special Effects Supervisor by way of his production house, Denver-based Asgard Entertainment.  Completing the team is musician Brian Fausett, the mastermind behind the seventies inspired soundtrack which is best described as ‘biker-funk meets soul-fuzz’.

Here’s the skinny on the flick:  Steel City undercover detective Chuck Beefer’s cover is blown during a drug sting, while trying to stop the spread of a ridiculously addictive and dangerous street drug called Voodoo Blue, it’s a synthetic cocaine that’s so addictive the only cure is death. The sting goes disastrously sideways when “The Cowboy”, a mysterious madman with a penchant for murder kills Beefer’s partner, his martial arts mentor Solomon Link, and leaves Beefer for dead. By sheer righteousness Beefer recovers. He’s assigned to an unofficial ‘phantom force’ along with the acidic ex-cop Jack Hammer (portrayed by Van Michaels himself), to put an end to Voodoo Blue once and for all and find out where the leak is within the police force. The two badgeless badasses careen headlong into the mean streets of Steel City’s seedy underground taking on a host deadly and bizarre characters—including as a gang of luscious and lethal ladies- before they realize just how far up the chain of authority the corruption goes.

Oh babies! Sure as sin sticks to skin this is gonna happen this summer, but Hot Lead Hard Fury is looking for some cash to make it happen in a “Beefer-sized” way. So reach out on indiegogo.com for some sweet, sweet love from these guys. If you’ve got a couple spare bucks, let’s say $10 or more, you can help make sure that Beefer’s story is told. So stop on by http://www.indiegogo.com/projects/hot-lead-hard-fury and drop some dough to make sure this masterpiece gets made. Hot Lead Hard Fury is brought to you by American Vintage Pictures, M Van Michaels’ film production company specializing in movies with the texture and style of cult/genre films from the 1960s and ‘70s.