In discussing the full pantheon of sound effect and foley, the Leather and S/M part of me will always first go to my primal thoughts with the sound of the chains that tether slave Leia to Jabba and that, ultimately, kill the despot beast disguised as a Master. (Who needs to jet over to the Sarlacc Pit for an afternoon of destruction and day drinking when you have a disrespected strong woman wearing flats and sporting a long chain “for his pleasure” already in the room?) Even as a young girl, before I understood my affinities for Power Exchange and BDSM made manifest in Catwoman and Wonder Woman, followed by Senator Leia in JEDI. 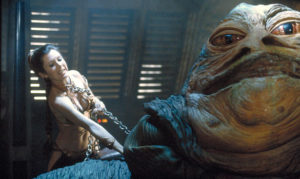 The light tinkling of the sound of her slave chains–a pitch much higher than, likely, chains that size would’ve actually made—struck me in all the right places because they reminded me that only a strong woman would’ve been able to endure that degree of submission, humiliation and objectification in order to get an outcome she wanted…hot damn. As a young girl at the start of puberty, I wanted to be en par with badasses female/femme warriors like Senator Leia, Diana Prince, and Catwoman so I studied the start of JEDI more than a dozen times in the dark move theaters and then many, many times alone in my room on VHS during childhood. 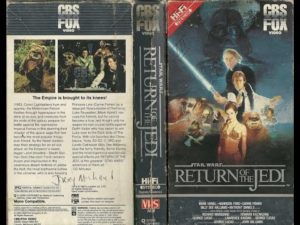 However, the sound effect that most recently made me actually cry and, likely, is the more holistically satisfying sound I appreciate in the STAR WARS films is the sound effect that leads to the opening of that “elegant weapon from a more civilized age,” i.e., a light saber. The tears I spilled during THE FORCE AWAKENS and the Luke’s lightsaber that was once Anakin’s was the one in Rey’s hand. I wrote a commentary about this moment a short while back in a Leather news source that can be read here. Ben Burtt was the main person working with George Lucas and reviewing the original STAR WARS storyboards to generate the sounds of the lightsaber A great, concise explanation of that discovery of all the lightsaber’s sounds can be located here:

As a documentarian who does a pretty decent job film editing, but needs to contract a sound editor, I have an amazing respect for those sound designers and sound editors who can match foley (sound and timing) with action; ebb and flow the swell of a soundtrack to evoke emotions, and get the EQ balance just right. I don’t wander into narrative filmmaking, so I can barely comprehend how innovators like Ben Burtt even conceptualize non-existent sounds, but I have great reverence for their artistic contributions to the worlds on film that make our world even more magical.