STAR WARS became a cultural phenomenon about ten minutes after the initial release of the first film in 1977, so it’s not surprising that there’s a virtually endless cavalcade of media associated with the franchise well beyond the films themselves. From fan films, to compilations of commercials hawking toys and cereal, to ill-conceived animated spin-offs starring the Ewoks or Droids, to the even more ill-conceived Holiday Special celebrating the Wookie’s Life Day that finally placed a four-armed alien cook played by Harvey Korman into continuity, the amount of STAR WARS-centric media could barely be contained by the bootleg VHS tapes and DVDs sold through the shady gray markets of convention tables and back pages of magazines. No matter how obscure or unavailable a STAR WARS-based film was, someone, somewhere would have recorded it on a grainy VHS tape to be ultimately dispersed through the fandom underground.

For years, however, there was one exception. 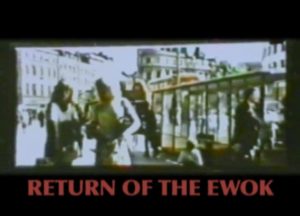 In 1983, during the shooting of RETURN OF THE JEDI, assistant director David Tomblin befriended 12-year-old Warwick Davis, the actor who portrayed Wicket the Ewok in the film. Inspired by Davis, Tomblin then directed “a little documentary about him” financed by Lucas (cheaply, as neither the cast nor crew were paid) while simultaneously working on the big-budget LucasArts production.1 In an interview with Starlog, Tomblin noted that the film was unfinished, and that parts of it may be used in another documentary. This proved to be the case, as clips of the film popped up in the promotional documentary CLASSIC CREATURES: RETURN OF THE JEDI in a segment about the creation of the Ewok costumes. 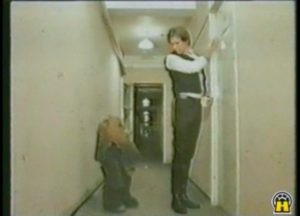 The film in question, RETURN OF THE EWOK, had been finished, but was never used for promotional purposes for JEDI, as it had been intended. In an interview with Davis a year later to promote EWOKS: THE BATTLE FOR ENDOR, Davis mentions having a VHS copy of the completed film next to his TV set. Described as a “humorous half-hour semi-documentary, semi-fictional film” that charted “Davis’ initiation into the world of Ewoks and blockbuster moviemaking,”2 RETURN OF THE EWOK’s existence became both definitive and mysterious. (Curiously, this article also mentions another nameless “home movie” featuring Davis and his BATTLE FOR ENDOR co-star Eric Walker, but this is neither named nor mentioned in subsequent pieces on Davis, so it’s likely that this was never intended to be anything more than a pair of friends goofing around with a video camera.)

After this, RETURN OF THE EWOK slowly became the stuff of legend. The sole known copy sitting idly on Davis’s shelf, STAR WARS fandom theorized as to what the film could be, and how one could see it. The mystery was finally revealed to a select few on November 13, 1994 – Star Wars Day. A celebration was held at Elstree Studios in England, featuring several members of the STAR WARS cast, including Kenny Baker, Jeremy Bulloch and David Prowse, and while Warwick Davis was unable to attend, he did send the celebration’s attendees a special treat – a copy of RETURN OF THE EWOK. (Oddly, the Star Wars Insider report on the con refers to it as REVENGE OF THE EWOK, making it sound much more ominous that it is.) This screening, a full decade after the film had been shot, marked the first public showing of the film to 700 anxious fans. 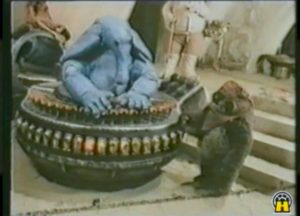 But those fans were quiet about what they saw, and the film disappeared again after this. A newsgroup post in June of 1997 on rec.arts.sf.starwars.misc mentions that the poster has “seen it and used to have it on tape” (a dubious claim) and offers a vague summary that seems more like the end result of a lengthy game of “telephone” with a plot synopsis: “It stars Warrick Davies [sic] as a boy who wants to return to his home planet. All the 3 leads are in it. Jabba is in it and also there is a scene with Roy Kinnear (a late British Actor) in it.”

It wasn’t until two years later that Davis began loaning out the film on an occasional basis, allowing it to be screened at the Star Wars Celebration conventions in 1999, 2002 and 2005. The 1999 screening heralded the first time the film had been seen in the United States, and a Star Wars Insider piece on the film goes into detail on the plot and behind-the-scenes tales from Davis himself. “It wasn’t something we planned to keep under wraps,” Davis explains in regards to RETURN OF THE EWOK’s obscurity. “Just nobody ever talked about it. It’s not until you think about STAR WARS a lot that you realize that within it, there’s some unique forage that’s really priceless.”5 The piece even featured a three-page pictorial of the film with captions, likely the closest thing you’ll ever get to a commentary track. 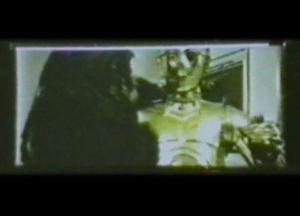 These Celebration screenings, however, didn’t result in the film leaking out onto the grey market under anything resembling good condition – the copies that emerged were poor-quality video recordings from a grainy video dub from a 16mm print that had long been lost. In the interview, Davis contends that “the charm about it for me now is that raw state that it’s in, you can see the reel changes – it gives you that real lost-in-the-attic feel,” but this wouldn’t be enough to satisfy the true STAR WARS completists.

It wasn’t until 2005 that a reconstruction took place that significantly improved the quality of the film. A copy of the film recorded from one of the Star Wars Celebrations fell into the hands Skot Kirkwood, who provided the copy to Garrett Gilchrist, an editor, artist and fan who had recently released the semi-documentary STAR WARS: DELETED MAGIC, a feature-length tribute composed of deleted scenes and alternate footage from the original STAR WARS trilogy.6 Gilchrist took the murky footage and remastered it, utilizing scenes from RETURN OF THE JEDI and clips that had been posted to the Star Wars Hyperspace website in April of that year in order to make the film look as good as it could. Gilchrist added custom opening credits as well, something the film had lacked due to never finish its post-production.

Through his Orange Cow Productions, Gilchrist released the “remastered” version on a compilation DVD called RETURN OF THE EWOK AND OTHER LITTLE FILMS, pairing it was additional STAR WARS-related shorts and clips (including a Japanese commercial by George Lucas and a James Earl Jones-narrated documentary about THX), finally allowing the film to be seen in – well, a significantly improved condition than it had been.

It’s this version of the film that you can see today, and it’s a fascinating curiosity for STAR WARS fans, a charming meta-adventure of Warwick Davis (amid a cast of familiar faces) becoming a star and battling the forces of darkness and airline security. You can enjoy it in the best version available below, unless you’ve got some way to get an invite to Davis’s house.

Sure, RETURN OF THE EWOK isn’t much more than a nifty, sweet curiosity for STAR WARS fans, but it’s one that took over two decades be seen properly. Digging obscurities from the ashes, dusting them off and giving them new life is one of the greatest things about fandom, and Gilchrist and Kirkwood deserve their accolades in making sure a splendid piece of cinematic history like this doesn’t go unseen. Gilchrist later provided similar services to the “Recobbled Cut” of Richard Williams’ THE THIEF AND THE COBBLER (like EWOK, this is provided online for free and with no profit), and you can donate to his Patreon here.