It’s safe to say that since the release of THE FORCE AWAKENS that STAR WARS is once again the big movie on most everyone’s mind. Thanks to  Disney’s taking over the franchise we’re seeing more of the galaxy far far away than ever. Merchandise is flying off the shelf, kids today have their own heroes and villains to obsess over just like the lot of us fans did when we first saw the film. Of course with all this you have the rush of merchandise with toys, clothing and every other conceivable type of product bearing the iconic logo and it’s many characters. Though there is one thing that seems to be missing from this…the plethora of video games taking place in the universe.

STAR WARS and video games have a very long history, going as far back as Atari and continuing through every console and gaming platform the world has seen. It’s touched on multiple genres from action, platforming, puzzle, simulators, even a fighting game with the Playstation 1’s STAR WARS MASTERS OF THE TERAS KASI. The universe of the movies lends itself to gaming very well with almost every type of genre being represented at one point or another. It’s this long history of games bearing the STAR WARS moniker that has someone like this writer, who has fond memories of playing the SUPER STAR WARS trilogy of Super Nintendo games as well as the iconic X-WING and TIE FIGHTER simulators for the PC, wondering what is going on. We’ve already had the unfortunate closing of LUCASARTS games division and the cancellation of STAR WARS 1313 (which was to be a game focusing on the non-Jedi side of things in a gritty, more scum and villainy focused underworld of the universe)but it’s shocking to consider that the only video games we’ve gotten in the last year or so with the release of THE FORCE AWAKENS are LEGO STAR WARS: THE FORCE AWAKENS, DISNEY INFINITY‘s now defunct STAR WARS content and the  divisive STAR WARS BATTLEFRONT. Even before when there was no sign of a movie on a horizon we would see games taking place in the Clone Wars universe such as REPUBLIC HEROES, even though the game was bad there were still developers putting out content using the universe. If there was one real game though us gaming STAR WARS fans are missing it’s a new game in the ROGUE SQUADRON series. 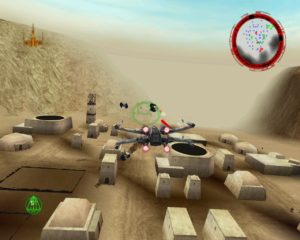 For the uninformed ROGUE SQUADRON was a series of games taking place in the STAR WARS universe that centered entirely on piloting the many iconic vehicles in the franchise through various styles of missions. Think X-WING but with less of a focus on simulation and more of a STAR FOX style approach where the major concern was less keeping an eye on the various gauges and controls in your ship and more on completing your mission with sharp shooting and daring flying. The first game hit the Nintendo 64 and the PC in 1998 and saw you taking the role of Luke Skywalker as he leads the elite aces of the rebellion known as rogue squadron with his fellow pilot Wedge Antilles across 16 missions that place between A NEW HOPE and EMPIRE STRIKES BACK along with a final mission taking place six years after the battle of Endor in RETURN OF THE JEDI. This is a big part of what makes this game so great and in this writer’s opinion the best of the series despite coming out on older hardware than it’s sequels. The fact that the game actually forms it’s own story within the universe instead of just having you play through the iconic battles. You go from easily recognizable planets like Tattooine to lesser seen planets such as Admiral Ackbar’s home planet of Mon Calamari, you even run into familiar faces such as Han and Chewie who lend a hand during a mission on Corellia. Adding even more of an exciting factor is that as you play the game you get to pilot different crafts other than the X-Wing. Take the nimble but fragile A-Wing for a spin, dish out the pain as a Y-Wing, or if your good enough to unlock them or use the cheat you can even fly the Millennium Falcon itself as well as change things up by taking the deadly Tie Interceptor into a mission. You can also fly a T-16 Skyhopper through Beggar’s Canyon so you can truly know if taking out wamprats is equivalent to targeting the exhaust port on the Death Star, you can even unlock the Death Star run itself as a bonus level. It really is a STAR WARS fan’s dream, especially if like this writer you were always enamored with daring exploits of the many pilots and their vehicles of choice. Sure, Jedi are cool and all but being the equivalent of a flying ace in the STAR WARS universe seems a lot more exciting to some of us. 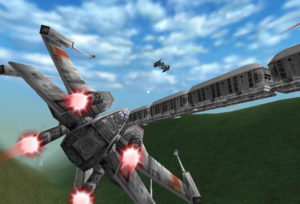 The ROGUE SQUADRON series got two more installments on the Nintendo Gamecube exclusively later on with ROGUE LEADER and REBEL STRIKE. ROGUE LEADER is often hailed as the best of the trilogy but unfortunately unless you own a Gamecube still you don’t have many other options to play it. Much like it’s predecessor the game takes place across the original trilogy as you control Luke and more often Wedge, with Denis Lawson himself providing his voice no less, through a variety of missions involving risky flying and shooting against the Empire. REBEL STRIKE continues the same tradition and while both are great games they lost a bit of the wow factor by that point when they started to essentially become the same thing. Not sure how many times the Death Star needs to be dramatically blown up. This brings us to the major point though…why haven’t we gotten a new arcade style action game in the vein of the ROGUE SQUADRON series?

THE FORCE AWAKENS saw the debut of the devil-may-care hotshot pilot Poe Dameron who leads his own squadron against the First Order. This already sounds like it would be perfect for a new game. Have Poe along with Snap Wexley and even Rey and Finn in the Falcon battling the First Order across various missions, with today’s graphics and the possibility of virtual reality support it would be hard to believe fans of ROGUE SQUADRON and non-fans alike would jump on board with it. You have a variety of new ships like the imposing Imperial Upsilon Shuttle, the dual seater special forces Tie Fighter, even with ROGUE ONE releasing there are already two new ships that have vehicles geeks like this writer excited to see what’s next. While the earlier mentioned BATTLEFRONT has a dogfight mode it just isn’t the same since it’s just random pilots fighting other random pilots. You don’t have that awesome feeling of being a part of a squadron like the original games gave you. The STAR WARS universe is vast as we’ve all seen from the new content from THE FORCE AWAKENS, a new series of games to expand on that and let gamer’s new and old have their chance to take flight in their favorite ship from the franchise is something this world is severely lacking. 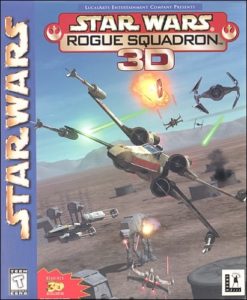