It has come to my attention, belatedly, that the gore-fu classic STORY OF RICKY is available on Blu-Ray, courtesy of a company called Tokyo Shock that doesn’t even have a website as far as I can tell. Here’s the Amazon link. They say they only have eight copies left. You may have to fight for one.

What is STORY OF RICKY? It’s a rarely-screened Hong Kong kung fu movie, based on a super-violent comic series called Riki-Oh.  The movie was first released in 1991. It tells the story (hey!) of a young hero, named Ricky (hey!), who is thrown into a maximum-security prison for reasons to be uncovered throughout the film.  Yes, it’s the SHAWSHANK REDEMPTION of Hong Kong gore comedies.  Put that in your IMDb Top 250 and smoke it. The story is set in the far-future of 2001, but none of that is the point.

The point is that Ricky has super-human strength [the reasons for which are never explained, nor should they be] as part of his kung fu repertoire, so when the corrupt warden and the assistant warden and their henchmen — the super-powered boss prisoners — mess with Ricky, he can punch their guts out.

I mean literally, punch their guts out.

Not for the squeamish, this one ain’t.  It’s so over-the-top and unrealistically cartoony that in my opinion it’s hardly upsetting, but when violence happens in this movie, it’s more violent than the entire run of Scorsese gangster movies put together.  There are few movies this gleefully, satisfyingly gory outside of maybe EVIL DEAD 2.

The movie follows absolutely none of the established rules of screenwriting. It’s more in line with more than a few of the rules of video games.  Character allegiances and audience sympathies come and go as if they’re on on iPod shuffle setting.  There is absolutely no moral or meaning.  In short, this can’t be argued as a traditionally “good” movie, but would I rather watch this flick than anything Meryl Streep’s ever done in her life (excluding only ADAPTATION)?  Yeah. For absolutely sure.

You watch this thing, which is hysterically funny, and you wonder, how much of its humor is intentional. The film as it’s available here is dubbed over in English, and the dialogue that’s said is at least as funny and insane as what’s happening on screen, so it’s possible that this was once a straight-faced effort that has since been given the Mystery Science Theater treatment. I wondered over this question for almost the entire running time, until the prison warden does what he does, and turns into what he turns into, and then the answer became clear.  But I won’t go into that here. Best you discover that for yourself.

But again, be forewarned, and it bears repeating:  This movie is violent.  I’m talking about such relatively tame examples as the scene where Ricky faces the mighty Oscar, and Oscar cuts open his own stomach and tries to choke Ricky with his intestines.  Then he wounds Ricky in the arm, and Ricky has to make a tourniquet with his own vein.  That kind of violence.  If you don’t think you can handle that, stay far, far away.  (I hear Meryl Streep has a movie coming out soon… You lily-livered flowerpot you.)

P.S.: Longtime Daily Show fans: This movie is apparently the source of that exploding head clip that appeared under the credits for years.  You know, this one: 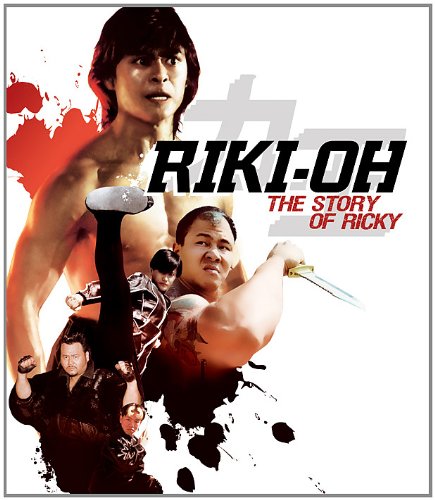