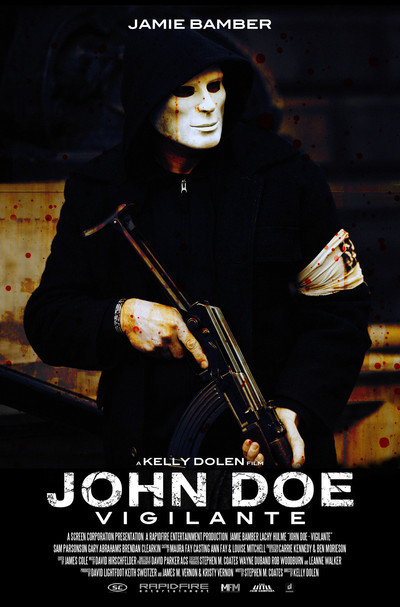 Pity poor Jamie Bamber. Five or six years ago, fresh from his fan-favorite turn as Apollo on Ronald D. Moore’s “re-imagined” Battlestar Galactica, it looked like the world was his oyster. Fast-forward to the present, though, and about the only place you can catch him apart from “starring” turns on various SyFy Channel movies of the week is headlining in stuff like 2014’s  JOHN DOE: VIGILANTE, a preachy, irritating straight-to-video Australian “revenge thriller” that’s decidedly short on thrills (as well as intrigue, sense, and coherence) and long on AM radio-style conservative boiler-plate sermonizing.

Here’s the damn thing, though: it should be so fucking cool.

I admit it — I’m more than willing to lock my political conscience away in strong box for 90 minutes or so to enjoy a good, bloody, brainless revenge flick. When I see out hero wronged, I’m as out for self-imposed “justice” as any other viewer (especially when he’s wearing  a kick-ass creepy, expressionless mask). The problem with JOHN DOE: VIGILANTE is that we don’t see our hero wronged, and that director Kelly Dolen and screenwriter Stephen M. Coates decide to play up some sort of flat, uninvolving “mystery” angle in relation to the motivations driving Bamber’s “John Doe” character in his quest for a pound (plus interest) of flesh.

In order for that to work, of course, it helps for the audience not to have figured out who the protagonist is after and for what reason, but our less-than-visionary Aussie auteurs don’t seem to have that much faith in their viewership’s ability not to grasp a point that isn’t jack-hammered into their skulls, so by the time the “big moment” finally comes and Doe goes directly in for the kill against the guy who is the root cause of all his troubles, any and all “revelatory” qualities the scene might have had are well and truly lost,  and instead you just want the whole sadistic thing over with already.

If it weren’t already obvious, subtlety is one thing this flick just doesn’t do. Which is okay by me in and of itself, but considerably more difficult to pull off if you’re convinced your film is “smart” (in this case they seem convinced that it’s actually smarter than anybody watching it) and has a “point.” Yeah, okay, maybe the cops aren’t doing their job and sometimes it looks like all the bad guys get off scott-free, but on the other side of the coin we have a much bigger problem : cops who are entirely too enthusiastic about their jobs and a criminal “justice” system that routinely convicts and incarcerates perfectly innocent people — and if you “take the gloves off” in the “war against crime,” as JOHN DOE: VIGILANTE seems to yearn for, you’re going to end up with a good number of those perfectly innocent people not only locked up, but dead.

Do I expect  low-budget DTV fare like this to take a probing look at that particular flip-side to the equation? Not in the least — unless it seems obsessed with treating these issues in some sort of thought-provoking, quasi-intellectual matter, as Dolen and Co. apparently think they’re doing here. If they could only have satisfied themselves with offering up an intellectually and morally dubious yarn about “getting even” by the most direct, violent means possible, I’d be right on board, but instead, they chose to nael-gaze their way into a plodding, sanctimonious quasi-“topical” take on the “evils” of a “lenient” and “permissive” society, and why those supposed “wrongs” are best dealt with by taking the law into your own hands. That’s not just offensive — it’s downright stupid. Here’s a tip : if you want to make a “smarter” version of the standard revenge flick, have a smarter take on the subject. If you don’t, then please — just give us the “kicking ass and taking names” that we’re used to.

To his credit, Bamber does what he can with the decidedly weak material he’s given (framing much of the flick in faux-TV-documentary style doesn’t help), and the film is, at times, able to reasonably approximate the high production values it’s trying to hoodwink you into thinking it employs (although the dodgy CGI helicopters and explosions right at the beginning don’t help), but that’s about all the praise I can muster up for this one. In the end, shit is still shit.

One thing that’s not shit, though, is Arc Entertainment’s DVD presentation of the film.  Not only are the widescreen picture and 5.1 stereo sound pretty much perfect (as, admittedly, you’d expect from an essentially brand-new movie), but it’s positively loaded with extras, including a raft of behind-the-scenes “making-of” featurettes, a generous helping of cast and crew interviews, and two full-length commentary tracks (one featuring Dolen and Coates, the other featuring Bamber on his own) that are considerably more interesting and involving than is the picture itself.