As far back as I remember, I’ve had a thing for haunted house movies and ghost stories. I find nothing more unnerving as a well crafted paranormal tale. There has always been something about the dead reaching back through the thinly veiled barrier between their world and the world of the living that has sent chills down my spine. THE DOMICILE is an indie ghost story that does just that. 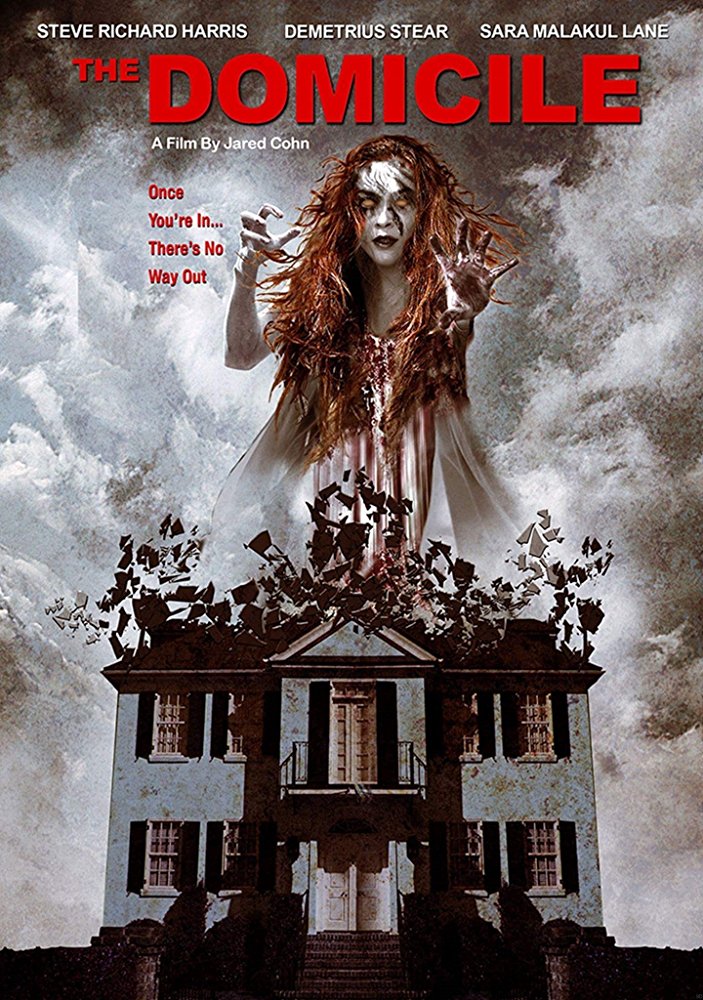 Playwright Russel Brody (Steve Richard Harris) lives a chaotic life. As he is trying his best to write a follow-up play that could easily make him or break him, he is also trying his best to hold together his strained marriage with his very pregnant wife Estrella (Katherine Flannery). Throw into the mix  sister-in-law Samantha (Amanda Ruth Ritchie), who suffers from an apparent schizoaffective, bi-polar disorder, and you have a recipe for bedlam. Estrella takes a tumble down the stairs, and due to the accident, she dies, and so does their unborn baby. Seeing a pregnant woman attacked by a ghost is pretty shocking. Estella’s death tears the family apart. Soon, Russell is haunted by the sounds of a crying baby and visions of his dead wife. The story goes from creepy to sinister in a blink of an eye.

The newly expecting family who is taking care of a member with mental illness is a unique dynamic. It seems familiar, but I can’t put my finger on where I’ve seen it before. I have to give it up to Amanda Ruth Ritchie. She does a terrific job in her portrayal of Samantha. She walks a fine line keeping her representation of mental illness realistic. She comes close to an over-the-top performance, but keeps it subdued enough to make it down-to-earth. She’s creepy as hell — I’d probably would have put her in a nursing home. I’d have to say that Russell is a saint for continuing to take care of his mentally unstable sister-in-law, after his wife passes away.

As much as I wanted to like Russell, he’s an idiot. There are many examples of this: 1) He investigates a strange noise, by himself, at night. 2) He thinks there might be a ghost, and he doesn’t get the fuck out of the house. 3) He’s not writing his play, but someone is. Yes, there is a literal “ghost writer.” Very corny plot device. 4) He thinks he’s having a bad dream when in fact it’s a ghost. Guess what? It’s a fucking ghost. 5) He invites his side piece over for some sexy time in the house haunted by his dead wife. Jeez, ya think that might piss off your dead ghost wife just a little bit.

As much as I was fond of the main characters in THE DOMICILE, the supporting character of David (Demetrius Stear) was an insensitive douche. If the makers of THE DOMICILE were trying to create an unlikeable character the audience wouldn’t mind seeing killed off, they succeeded with David. All in all, the acting in THE DOMICILE isn’t the best I’ve seen, but at the same time, it isn’t the worst either.

One of the most clever things about this movie is how they created an atmospheric, dread filled film on a tiny budget. Limiting the set pieces to mainly the family’s house helped to bring a claustrophobic, closed-in feel. Another great trick for keeping the sinister atmosphere is the literally dark cinematography. It’s so dark that the jump scares are much more effective than they should be. Not only that, but the random point-of-view shots added to the intensity. The overall sound quality isn’t the best, but that can be over-looked. It’s an indie — cut it some slack. I would also like to add that the minimalist score helped to drive along the fear without being too overbearing. I even appreciated the lo-fi make-up on the ghost. It reminded me of the Deadites in the original EVIL DEAD.

If you can’t get enough of scary, specter-filled dark houses, and you’ve already watched all the mainstream crap, then you check out THE DOMICILE. It has everything, from a great nod to THE ENTITY and POSSESSION with sexual possession, to a nice homage to THE LOST BOYS, with worms showing up in Russell’s food. If nothing else, THE DOMICILE will keep you from cheating on your significant other. THE DOMICILE is currently available through video-on-demand and DVD. Try it — you may like it.