5) HORROR SOCIETY TRASH MOVIE NIGHTS
HORROR SOCIETY bringing back it’s irregularly scheduled programs, that they started back in 2011, definitely boosted up my social calendar in 2016. Matt Storc and gang have really outdid themselves with this fun meeting of like minded genre nerds. Each night there is a theme (e.i. werewolves, robots, aliens, mini monsters, etc.), and in between the movies there is movie trivia pertaining to the movies being shown. I don’t mean to brag, but when I walk away with at least 2 prizes a night, I feel like king horror nerd. Also, depending on the location of either Fat Cat Lounge, Emporium Arcade, or Bucket O’ Blood Books and Music, there is always drink specials, free popcorn, special guests, raffles, and many other kick ass surprises! I’ve enjoyed watching MAC AND ME, GHOULIES, CHOPPING MALL, HARD TICKET TO HAWAII, and a bunch of other trashy awesome movies. Looking forward to see what HORROR SOCIETY has in store for us in 2017! 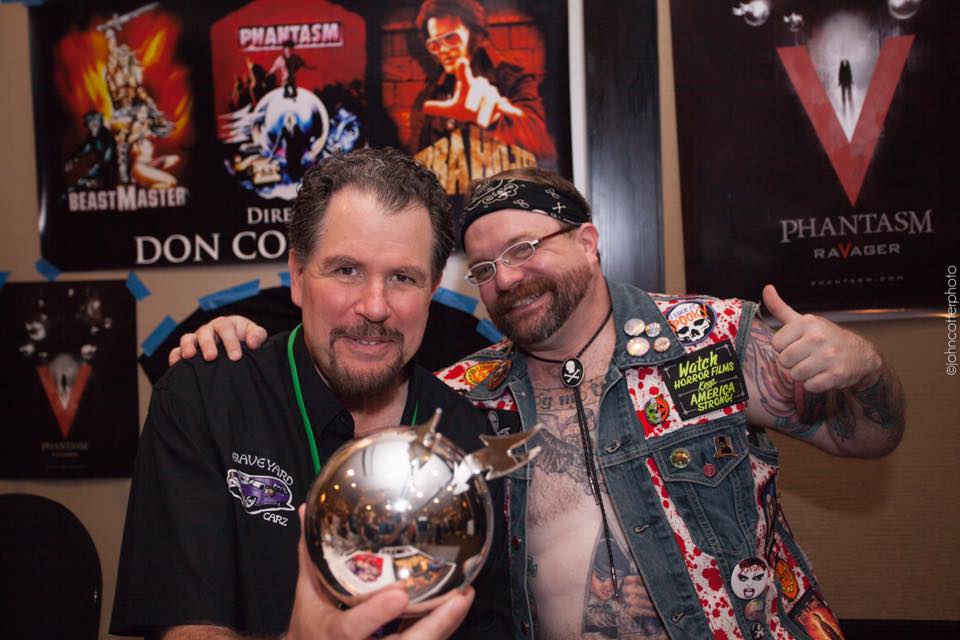 4) FLASHBACK WEEKEND
Do I get drunk and act like a fool at horror conventions? You betcha! Do I enjoy the fuck out of myself? Definitely! 2016’s FLASHBACK WEEKEND was one for the books! Besides seeing so many of my horror family friends I also got to meet and chat with some of my best-loved horror icons. Some of my favorites were Don Coscareelli (director of PHANTASM), Julian Sands (star of WARLOCK), David DeCoteau (director of SORORITY BABES IN THE SLIMEBALL BOWL-O-RAMA), John Russo (co-writer of NIGHT OF THE LIVING DEAD), and special effects legend Robert Kurtzman. Besides the guests, there are also so many aging vendors with hard-to-find horror merch and movies. I now I rang up a crazy credit card bill with SYNAPSE FILMS, CREEPY CO, ZOMBIE ARMY/SINISTER VISIONS INC, FULL MOON PICTURES, VINEGAR SYNDROME, and many others. FLASHBACK WEEKEND is one of those yearly events that can’t be missed. 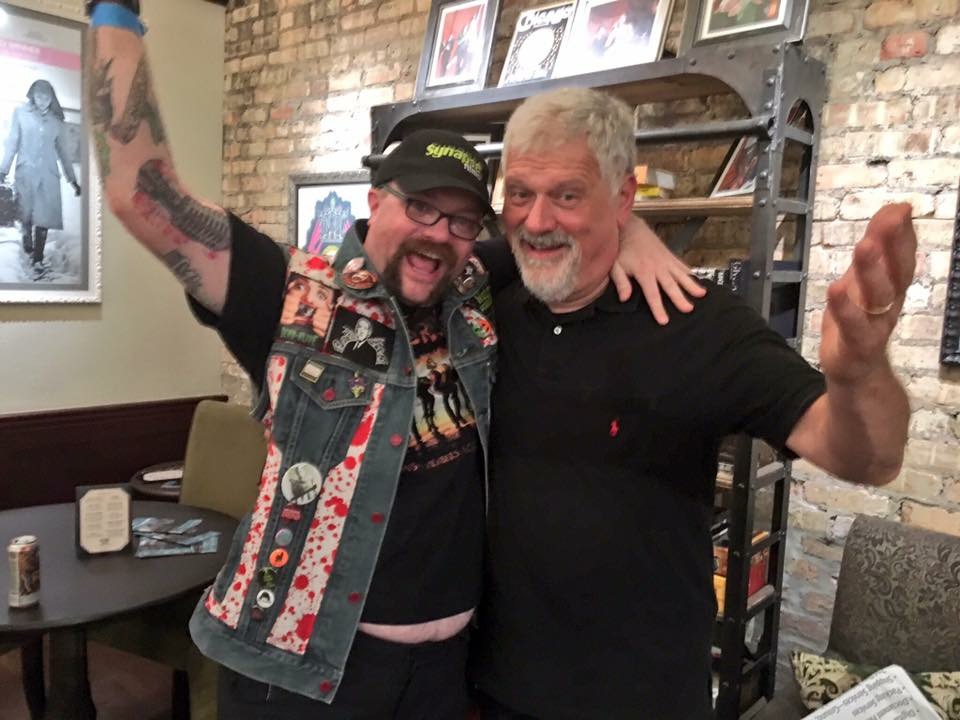 3) THE BEYOND: COMPOSER’S CUT – LIVE SCORE BY FABIO FRIZZI
I’m not that knowledgable when it comes to which composers scored which films, but I do know what I like, and I love me some Fabio Frizzi. Frizzi has composed music for every genre of film, but he’s best known for his work on horror films. You can hear his work on THE PSYCHIC, ZOMBIE, CITY OF THE LIVING DEAD, MANHATTAN BABY, and my personal favorite and film in question THE BEYOND. It was an electric night at the Music Box Theatre, Fabio was more than excited to meet with his fans before the concert. He was very personable and gracious. He was happy to sign autographs and take pictures. The place was sold out, and when the music started I was in awe. Seeing him up there conducting his live band during THE BEYOND was jaw dropping. The power, and energy behind it was incredible. I had never heard of a “composer’s cut” of a film before, but if there is a chance to enjoy an event like this again in the future, I would not miss out on it! 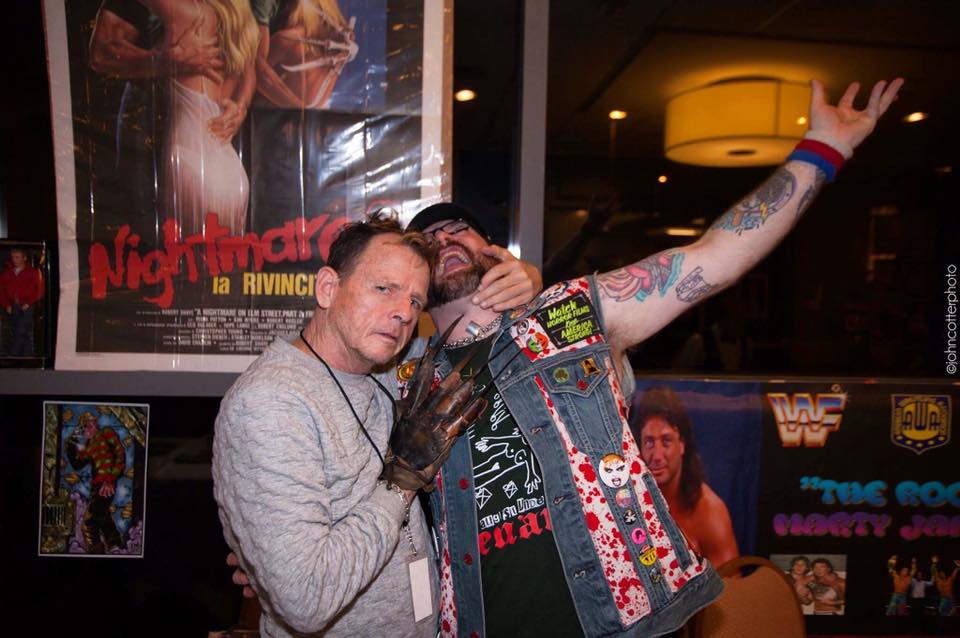 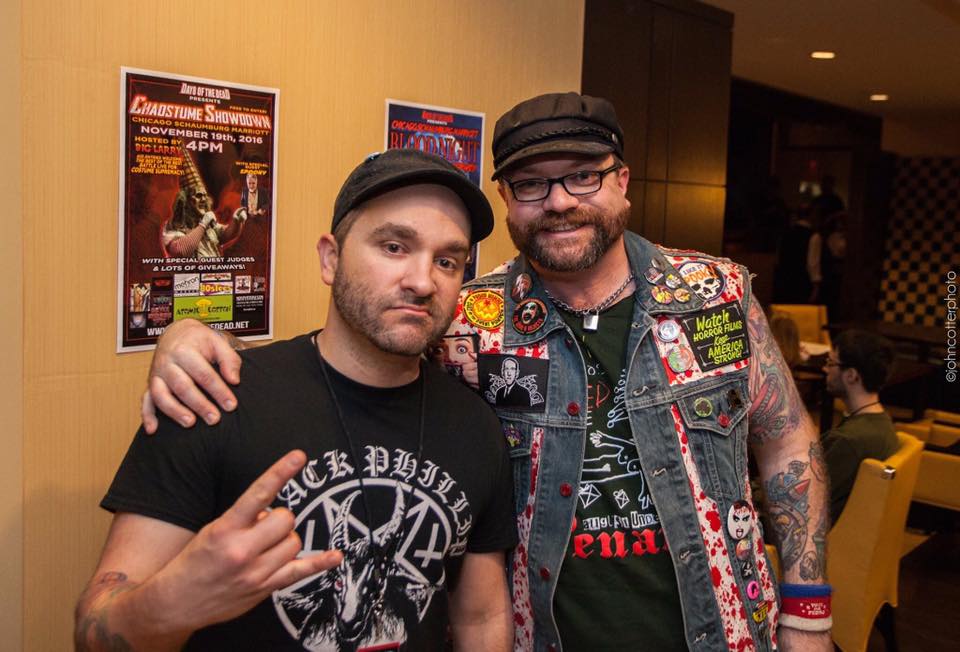 Jeremy and the organizer of Days of the Dead Chicago, Adolfo G. Dorta
2) DAYS OF THE DEAD: CHICAGO
Let me just say that DAYS OF THE DEAD: CHICAGO is my favorite horror convention. It’s more than just a convention, it’s a family reunion, and it’s a weekend-long horror nerd party. The line up of guest this year was a dream come true. It’s always great to see Bill Moseley and Sid Haig from THE DEVIL’S REJECTS, there was also Jon Heder from NAPOLEON DYNAMITE, Mark Patton (star of NIGHTMARE ON ELM STREET 2: FREDDY’S REVENGE), Gary Pullin (art director for RUE MORGUE MAGAZINE), pro-wrestling legend Ric Flair, and grandaddy of shock-rock ALICE mother fuckin’ COOPER! The professional photo ops were once-in-a-lifetime opportunities. There was, Tony Todd in full CANDY MAN regalia, how can you beat that?There was so many more mind blowing guests, but it wasn’t all about the guests either. Once again, my cards were maxed out at the vendor tables. I screamed, “Shut up and take my money” to PRETTY SPOOKY HANDMADE, HORRORNAMENTS, ATOMIC COTTEN, and PALLBEARER PRESS. But wait, the fun doesn’t stop there. Costume contests, tattoo contests, dance parties, karaoke parties, it was a party on top of a party! DAYS OF THE DEAD: CHICAGO  is #1 when it comes to horror conventions. I’m looking forward to more of the same in 2017. PARTY! 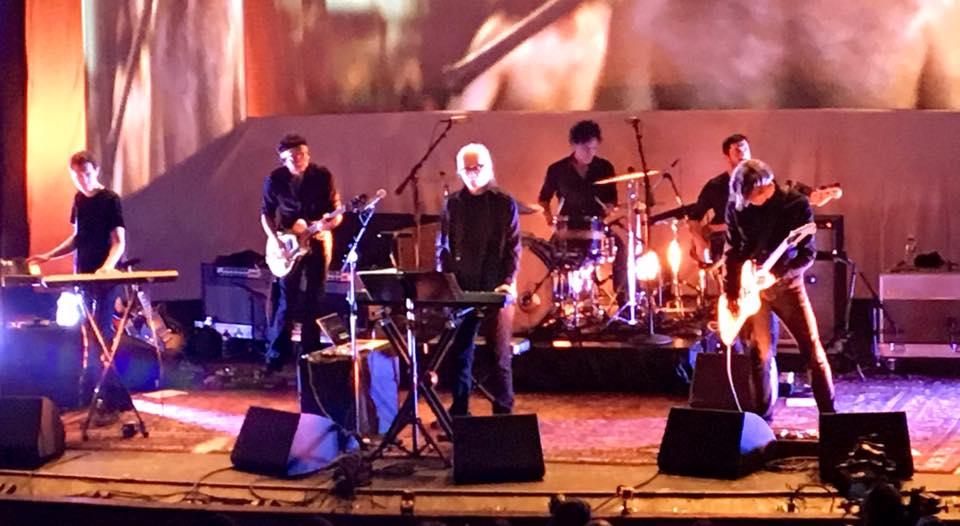 1) JOHN CARPENTER: LIVE RETROSPECTIVE (PERFORMING THEMES FROM HIS CLASSIC FILMS AND NEW COMPOSITIONS)
This was one of the greatest moments of my life! I was so geeked out of this event that I not only opted to put on a button-up shirt and slacks, instead of my usual horror-themed battle vest and shorts, but I also got to Thalia Hall way before doors opened. You could feel the excitement, just waiting outside to get into the venue.
Of course, I had to have the V.I.P. meet-and-greet package. With that included a signed limited edition poster, a laminate of the event, a photo with John Carpenter, two items signed by John Carpenter, and a cloth tote (which came in handy to carry said items). I had John sign two split vinyl picture discs of themes for his movies.  After years of horror conventions and film screenings I don’t get nervous meeting genre icons, but in this case my anxiety was through the roof. I had heard that Carpenter could be dismissive to his fans, but that wasn’t the case this night. He was casual, and took the time to talk to all his fans who came to see him. He was a real class act!
After finding my seat in the balcony, I had a couple of drinks and settled in. Once the concert began, my head exploded! What an incredible performance! Seeing John Carpenter on stage, surrounded by large movie screens playing scenes from his movies, with a live rock band gave me chills! Opening with the themes to ESCAPE FROM NEW YORK and ASSAULT ON PRECINCT 13 really set the stage for greatness! I didn’t recognize, some of his music from his LOST THEMES albums, but it was still equally enjoyable. It was the live renditions of his horror movies that had me clapping and cheering out loud. IN THE MOUTH OF MADNESS,PRINCE OF DARKNESS, and CHRISTINE were all top notch, but it was the theme to HALLOWEEN that completely blew me away. Beyond the music, John Carpenter’s stage presence and in-between-song banter just showed that he was having so much fun doing what he was doing. If you missed out on this, you missed out on something very special.
John Carpenter – “Halloween Theme” (Chicago, IL 7/16/16) 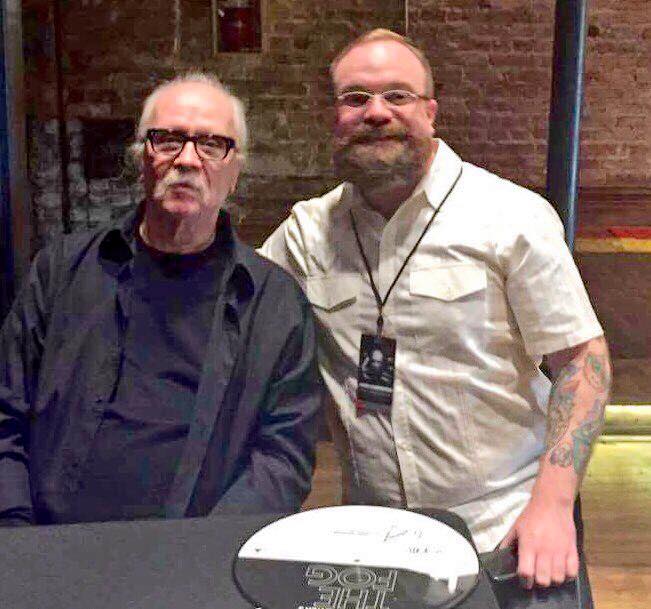