Halloween is over, Thanksgiving will be gone in a flash, and now it’s time to skip ahead to the most wonderful time of the year, Christmas. Not necessarily because of the presents, good tidings, and merriment, but because each Christmas brings a new batch of Christmas-themed horror films. One of many this year looking to make your spirits bright is RED CHRISTMAS. 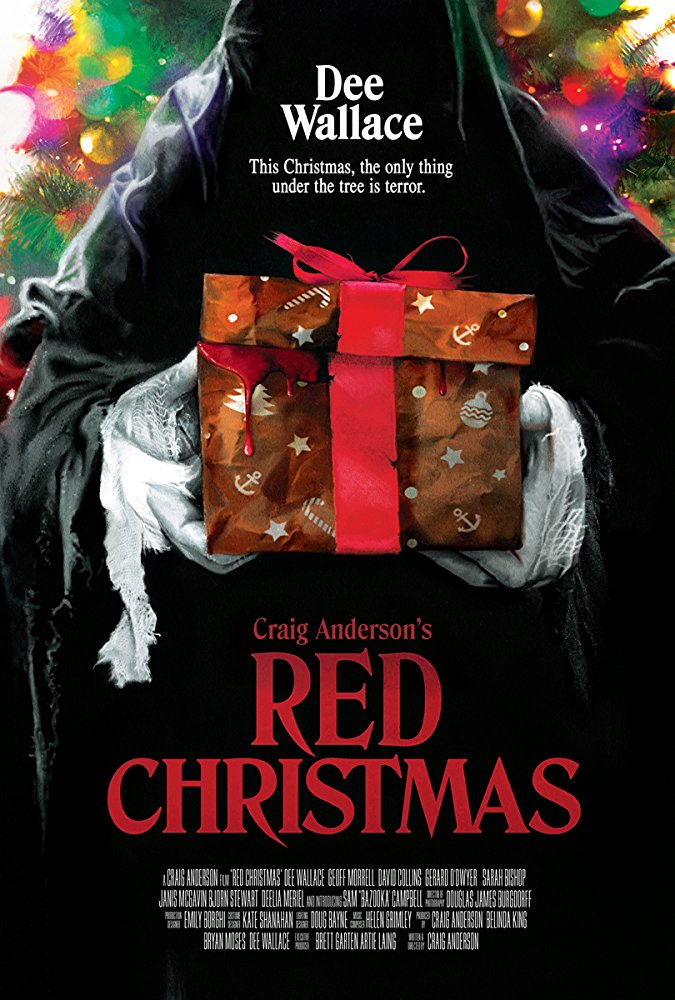 Grabbing your audience’s attention right from the first frame is important in an horror movie. Lately I’ve seen a lot of indie horror films achieve this by shoving pointless nudity and gratuitous gore up front, to capture the minds of its viewers. RED CHRISTMAS goes a different route. Sure, there’s violence, but it’s in the form of a priest committing an act of terrorism and blowing up a woman’s clinic, because they perform abortions. To make things more fucked-up, the terrorist finds a living fetus and takes it with him. Woah — not really what I signed up for, but now I’m in for the long haul, so let’s do this. 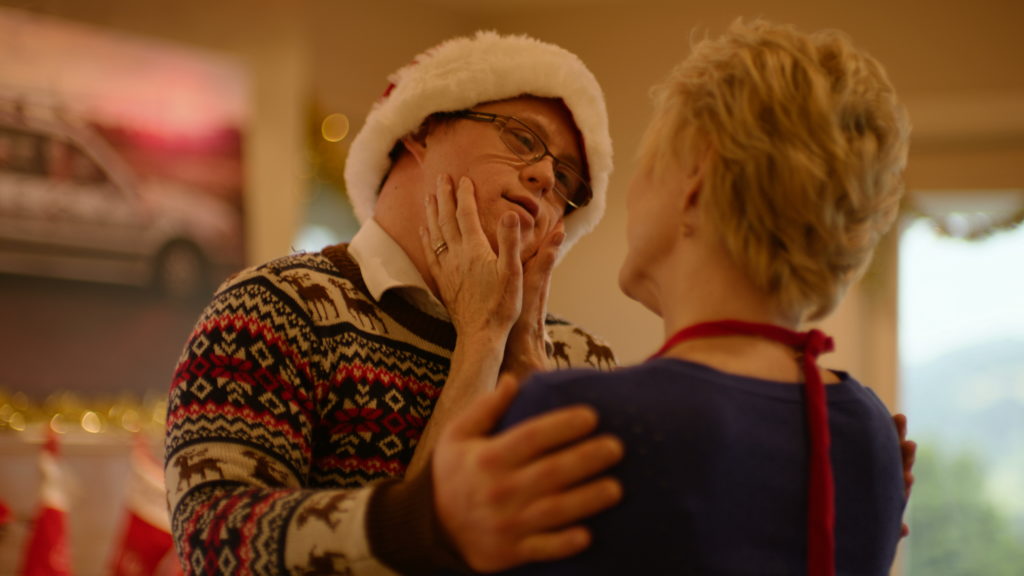 Flash forward 20 years to what first appears to be a picture-perfect, suburban family enjoying Christmas together. Of course like all families, this one is anything but perfect. I feel for Diane (Dee Wallace), the matriarch of the family. She’s trying to pull it together while her two oldest daughters Ginny (Janis McGavin) and Suzy (Sarah Bishop) are continuously bickering, and the youngest daughter Hope (Deelia Meriel) is completely despondent. The bright spot in the family, and the most likable character in the movie, Jerry (Gerard Odwyer) is the only son, he recites Shakespeare regularly, is a genuinely good person and has Down syndrome. All the family interactions feel real, and the characters have depth. 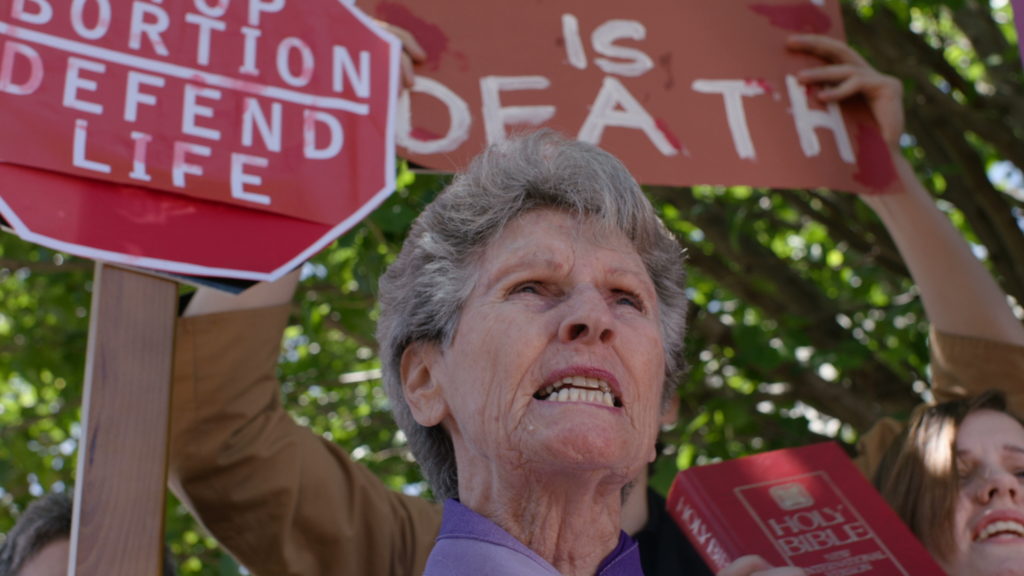 A lull in action has many of the family members that brought their significant others with them to have sex and smoke weed. Once again, nobody is perfect, and if this is an homage to 1980s slasher movies where anybody that did drugs or fucked got killed, it works. Everyone is a pervert, and I love it! 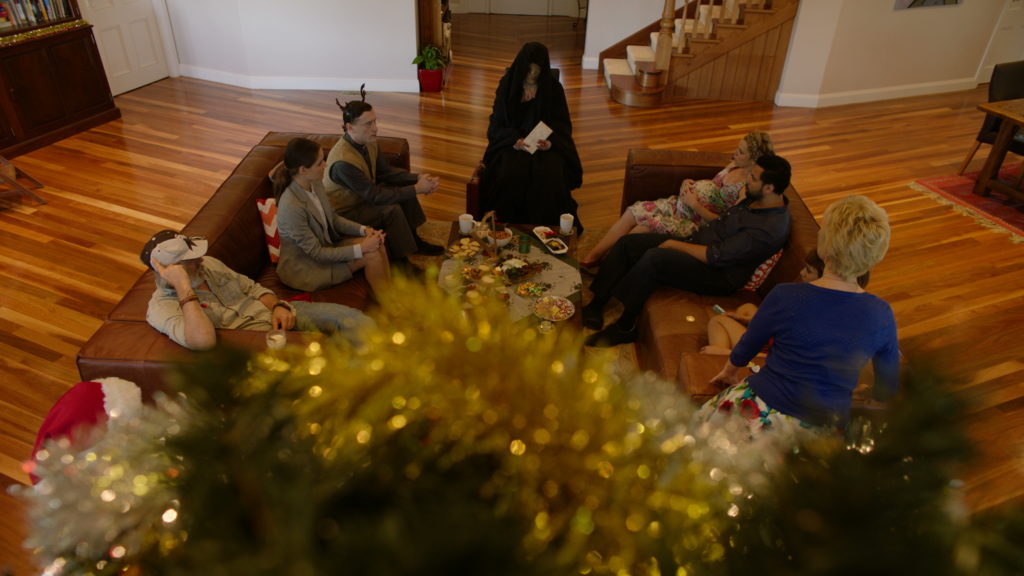 Knocking on our family’s door is our psycho killer Cletus (Sam Campbell). Cletus is unlike any slasher I have ever seen. Big points for originality. He wears a heavy black cloak, and all his skin is bandaged up. Kind of a cross between Peyton Westlake in DARKMAN and Ghostface from SCREAM. Being a good-hearted woman and it being Christmas, Diane invites poor Cletus in to share in their holiday magic. The weird family dynamic just got weirder! 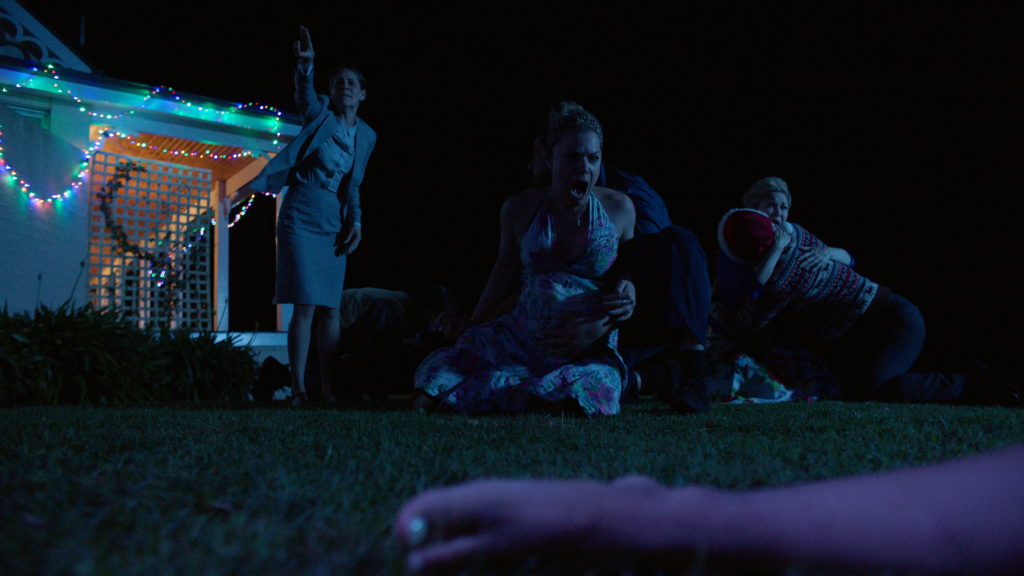 It doesn’t take long for Cletus to make himself persona non grata. Bringing up a bombing of an woman’s clinic where Diane was a patient will do that. Cletus is told to leave, and that’s when all hell breaks loose. Honestly I didn’t understand why everyone starts splitting up. Oh well, I guess it don’t have to make sense. It’s more about getting the movie going. 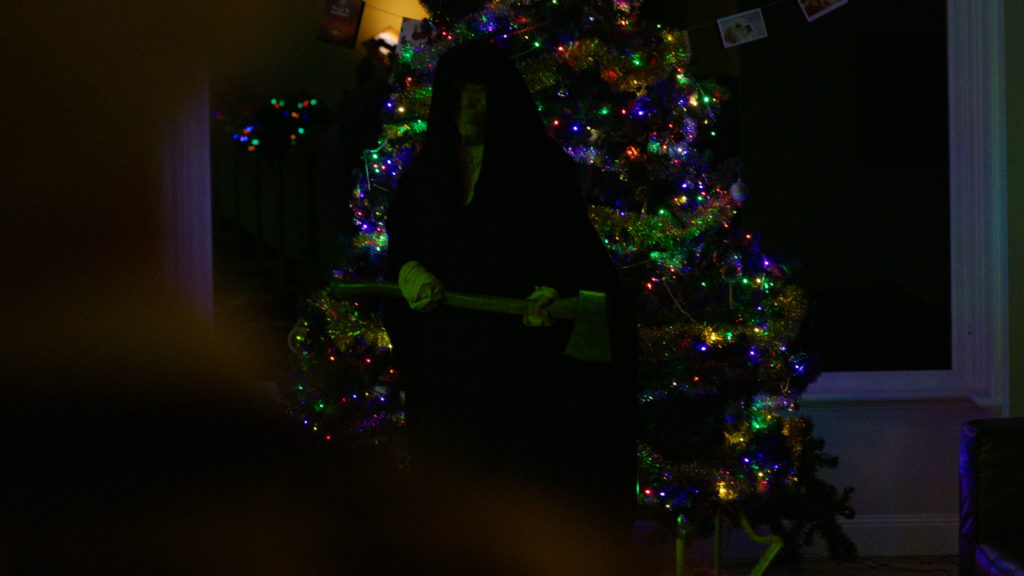 All Cletus wants is love, but being rejected, he turns to revenge. The gore is plentiful and great, and will satiate any gore-hound out there. Victims split with axes, ripped-off penises, a bear trap to the head, shotgun blasts — RED CHRISTMAS has it all! Some very impressive kills. From time to time, though, a comedic element is forced into the film, and that just didn’t do it for me. RED CHRISTMAS is just too dark to be funny — although I did laugh every time I thought about how Cletus rhymes with “fetus.” I also enjoyed the way the film used Christmas lights as lighting — it gave RED CHRISTMAS an overall Argento feel. 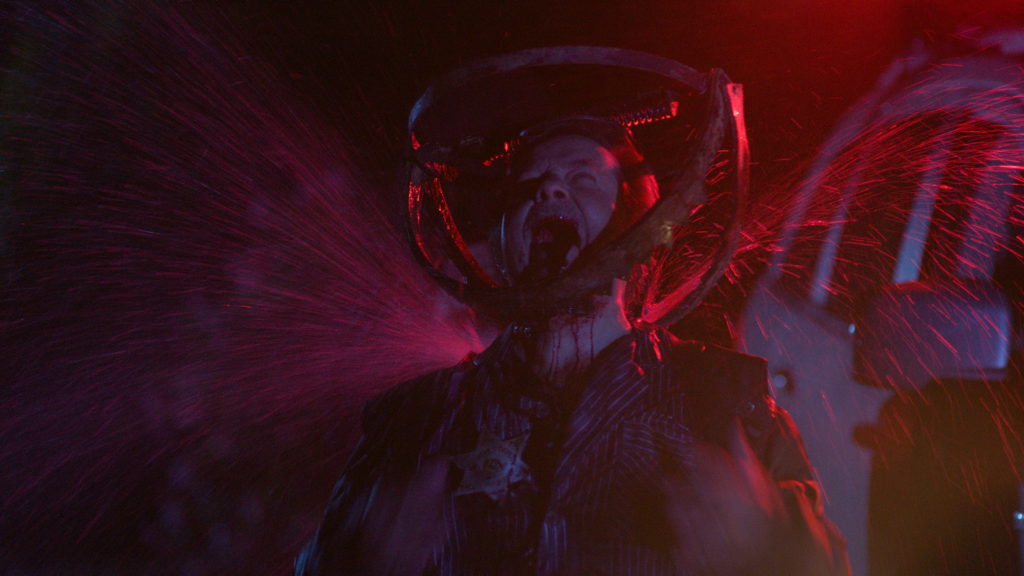 Whether having the killer be a survived abortion with Down syndrome is heavy-handed pro-life propaganda, or just a very original plot device that I had never seen before — that doesn’t really matter. RED CHRISTMAS is a blood-soaked horror romp that needs to be seen to believed. But don’t slow down too much to pick apart its logic. Why does half the family have an Australian accent and the other half doesn’t…? Who knows? Just watch and enjoy.