There’s been a fad somewhat recently, of movies paying homage to genre films of the past.

However, LAKE NOWHERE convincingly succeeds where many fail. 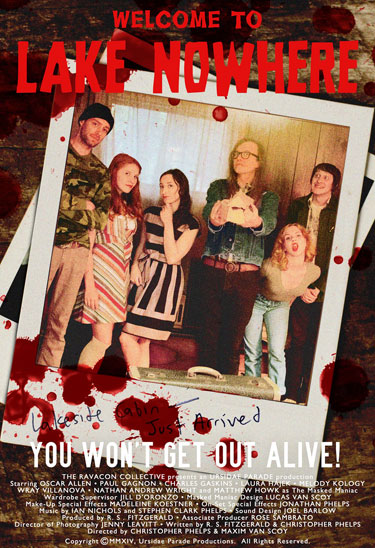 Like several of its slasher predecessors,  the film begins with a group of friends who head out to the woods for shenanigans typical of the genre:

Sure enough, faster than you can say Freddy Voorhees, a masked maniac inexplicably shows up and starts knocking people off in no particular order

As a matter of fact, the movie delivers everything you’d expect from a good slasher: 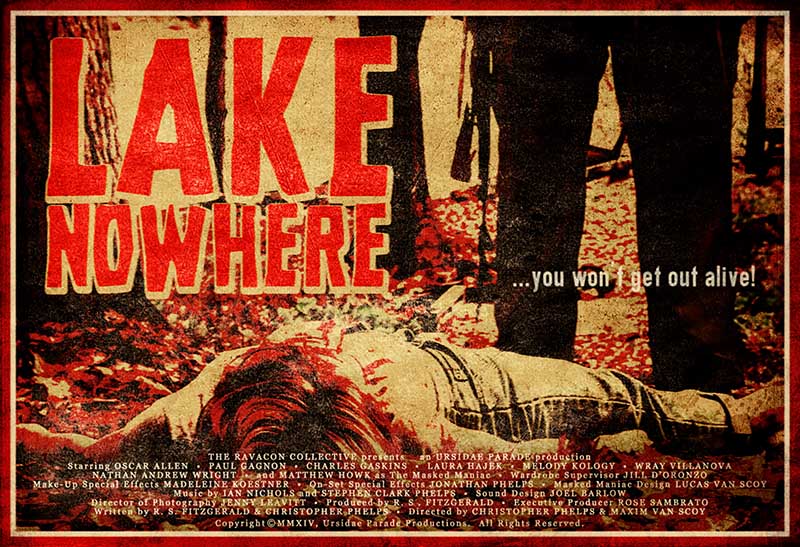 LAKE NOWHERE is a fantastic throwback to those obscure VHS titles you might accidentally stumble upon in your local ma-and-pa shop, back in the day.

Even the grain of the film looks like a VHS copy of a copy — complete with the inexplicable static lines intermittently scrolling intermittently down the screen, as well as trailers for other obscure genre films you might want to search for — I counted two giallo films and one ”nature gone amok” entry.

There are even random cuts to clips you can’t figure out, like a program that was originally on the tape before you taped the horror movie over it. You know — like the sextape your parents filmed at the local Motel 6 over Easter break; which you initially used to record all your precious episodes of Simon and Simon…

But none of these novelties are distracting. In fact, they add more ambience to the film experience as a whole. Most importantly, nothing in this movie is ever used in a wink-wink-nudge-nudge joke fashion.

Instead of mocking those classic predecessors, LAKE NOWHERE instead embraces these slasher conventions and integrates them seamlessly into the film, thus making it a solid slasher in its own right.

Instead of mocking them  or writing them off as mere kitsch, LAKE NOWHERE can proudly sit on the video shelf shoulder-to-shoulder with such classics as FRIDAY THE 13th, THE BURNING, REDEEMER! THE  SON OF SATAN, and maybe even BLOOD FREAK (dare to dream big, I say!)

Of course, not everything can be peaches and cream.

Keeping in mind that I’m a moron, here are a handful of problems I had with the film:

Which leads me to my next issue:

The sound is very muddy at times (it should be noted that I watched the streaming version on Amazon).

Moody, atmospheric, and beautifully shot, LAKE NOWHERE is a fantastic homage to  the slashers of yesteryear — perhaps most importantly: LAKE NOWHERE is simply a fun film in its own right