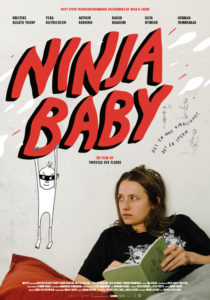 Despite centuries of societal change, intellectual evolution, and untold numbers of permutations, there’s still a lot of specific imagery and assumed elements when discussing families. There are, of course, certain basic ingredients of biology shared in producing a baby, but everything else but those few (literally tiny) building blocks varies wildly. There is an untold combination of the types of people involved, their parenting approach, their network of support, and more that results in an exponentially changing portrait of what a “family” means. Co-writer/director Yngvild Sve Flikke’s NINJABABY— screening at SXSW Online 2021– is a funny, inventive, and frank look at how families are constructed and the impact a new life has on all around it. The film is sincere above all else– even its wildest moments are built around genuine emotions and character development, which leads down unexpected but incredible paths.

Rakel (Kristine Kujath Thorp) has dreams but is mostly content pinballing around life partying with total abandonment. As is common with her spur of the moment lifestyle, she goes with Ingrid (Tora Christine Dietrichson), her roommate, to an aikido class, in the midst of which Rakel realizes she slept with the instructor, Mos (Nader Khademi). Not long after, the roommates realize that Rakel is pregnant…and that forgotten lover Mos is the father. Or at least, they’re pretty sure. NINJABABY finds this group expanding and collapsing as it draws in Rakel’s frequent fuckbuddy Dick Jesus (Arthur Berning), her half-sister Mie (Silya Nymoen), and her wisecracking fetus (voiced by Herman Tømmeraas). Rakel doesn’t want to be a parent, but also is uncertain exactly she does want out of life. 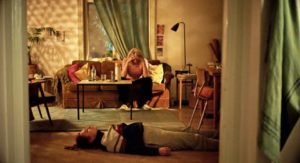 NINJABABY is a mixture of OBVIOUS CHILD, KNOCKED UP, and ABOUT A BOY in that it deals with childbirth and child rearing, but also abortion, cobbling together some semblance of family, and navigating the waters between what people feel they “should” do and what’s a better fit for them to do. Thorp is great in the lead, fueled by chaos and beer– the type of character that is too often assigned to men. She’s comically blunt but uses that as a shield to block people from noticing that her unmoored existence is equal parts liberating and terrifying. The actress lends her funniest and most outlandish moments with a real human touch that allows for real emotional depth. Not only does that make her great performance even more endearing, but it means there isn’t tonal whiplash as serious parts of the story unfold around this “good times” person.

Flikke’s film has an asymptotic relationship with villainy. Characters that should be seen as bad (or are behaving in an antagonistic way) are quickly revealed to be just flawed folks trying to get through the world as best they can, even if it’s done awkwardly or not how people are supposed to act. This humanist charm adds a lot of light, even when NINJABABY gets dark as it exams a lot of heavy, real world issues. It would be easy to ditch all of these complicated moments and emotions for a more whacky MAMMA MIA type set-up or something where a group of misfits hilariously try to be parents. Instead, NINJABABY (written by Flikke, Inga Sætre, and Johan Fasting) is still able to have those fun moments and same type of story but injecting more profundity and heart with its messier perspective. 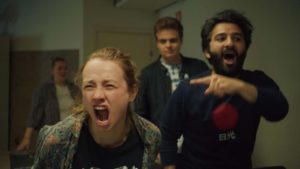 Beyond Thorp, all of the actors are terrific. Khademi is impressive as a meek, kindhearted man who has found himself in the middle of Rakel’s maelstrom. Berning is a perfect foil to this as the man-child that seemingly only thinks about what he says after he says them—and even then, it’s a crapshoot whether he actually does consider his words. As Ingrid, Dietrichson isn’t the responsible counterpoint to Rakel’s hard living ways, or at least not solely that. Dietrichson is right there making jokes and having her own fun, while still having a pragmatic approach to life. Even a minor character like Mie is given a layered story and a nuanced performance by Nymoen.

Another bit that elevates NINJABABY is the use of animation littered throughout the film. Rakel likes to draw, and these artistic expressions are another exploration of her headspace. It’s a messy alternative comix version of the animated moments from BETTER OFF DEAD and ONE CRAZY SUMMER. There’s the symbolic forest where she’s trying to live, the scribbled out faces of the world judging her, and the cartoonish capture of those around her. But it’s the inclusion of the titular NinjaBaby—an imaginary character that scolds Rakel for her choices and recoils at the world into which it may soon arrive (all while fixated on Angelina Jolie)—that stands out for its weirdness, comedy, and reflection of Rakel’s mental state. It moves around Rakel’s apartment like a dark version of Sesame Street’s Teeny Little Super Guy while engaging in all sorts of odd, and often dark, banter. There are numerous such elements that create an unstable reality, perfect for capturing the situation in which Rakel finds herself. 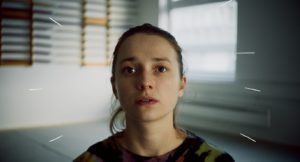 NINJABABY isn’t exactly breaking new ground. These are stories that have been told in other mediums and even in other movies before. There is a gender swap nature to the characters, but otherwise, on paper, it sounds like a basic dramedy around pregnancy. Flikke and company inject NINJABABY with so much specificity and genuine heart that it ends up becoming more universal and powerful. It would be easy to play this all off with a laugh or center it on the sadness and anger. But by choosing the more difficult path, by combining these aspects so they are complementary and not adversarial, NINJABABY will stay with viewers for a long time as they see a lot of themselves on screen in an incredibly charming– and personal– film.