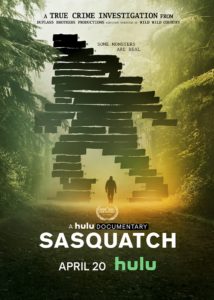 It’s no secret that true crime is booming. An ever popular genre, the advent of streaming moved it from a niche on cable networks and HBO specials to a worldwide phenomenon with such titles as Netflix’s Making a Murderer, Tiger King, and Don’t F**k With Cats. Now, streaming giant Hulu is at last making a massive stride forward in the game with upcoming true crime meets cryptid mystery documentary series, Sasquatch.

Comprising of interviews with everyone from journalists, former back to land hippies, weed growers, and scientists with fantastic anecdotal animation provided by Drew Christie, Sasquatch follows legendary investigative journalist David Holthouse as he tries to unravel the web woven around a triple homicide from the fall of 1993 in Mendocino County California that has been blamed on Bigfoot.

The pilot episode sucks you in immediately. Holthouse’s impeccable credentials engender trust in his methods and sincerity quickly, necessary for a murder mystery as wild as the idea of Bigfoot murdering three marijuana farmers, and the circle of experts he employs including scientist Dr. Jeff Meldrum and filmer of the most infamous alleged sasquatch footage in history, Bob Gimlin, adds a balance to the various viewpoints on the subjects of sasquatch specifically as well as cryptids in general. However, this is not to say that the myth is being put in the forefront; something sinister happened and has been happening for years in the marijuana farms of the Pacific Northwest (some showcased in Netflix docu-series Murder Mountain), something sinister enough to make a seasoned private investigator tap out of the investigation almost as soon as it starts.

What spooked him? What really happened to those men that cold, fall night in 1993? You’ll have to tune into Hulu’s Sasquatch to find out. I know I will.