Say, I have a question: Why isn’t EVERY movie PG: PSYCHO GOREMAN?

The latest horror-comedy from the creative team formerly known as Astron-6, Canada’s beloved cult filmmaking group, marries together all of their go-to trademarks for outrageous gore, very specific humor, practical effects, and homage to ‘80s and ‘90s Hollywood sensibilities, resulting in their best collaboration to date. Written and directed by Steve Kostanski (his latest was the better than expected solo effort LEPRECHAUN RETURNS), who helmed most of the group’s other titles like MANBORG, FATHER’S DAY, straight horror THE VOID, and episodes of their web series DIVORCED DAD, PG: PSYCHO GOREMAN can best be summed up as: What if E.T.: THE EXTRA TERRESTRIAL were actually a horrifically violent monster movie but still aimed at kids? What if it contained all the stalwarts of ‘80s/’90s Spielbergian filmmaking like childlike awe and absentee fathers, mixed with Lucas-like galaxial politics, and finished with a healthy dose of Cronenberg-ian/ Verhoeven-ish bodily horror? PG: PSYCHO GOREMAN is what would happen, and it would be an utter fucking joy. 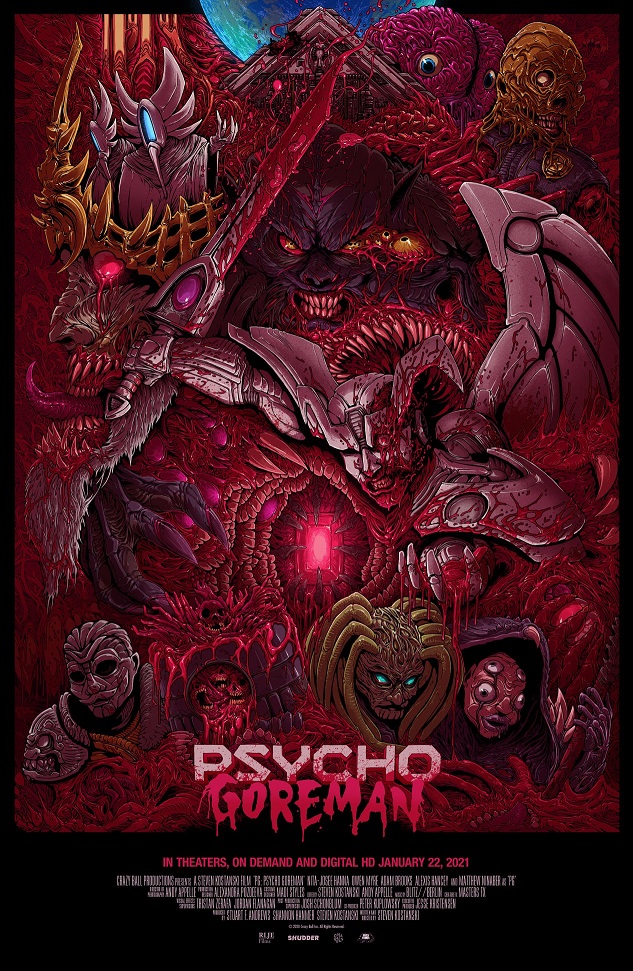 With nods to iconic horror titles like PHANTASM and VIDEODROME (as well as Astron-6’s own beloved short film BIOCOP), and one particularly hilarious homage to JURASSIC PARK, specifically Sam Neill’s wardrobe, PG: PSYCHO GOREMAN embraces the entire horror genre and is seldom unfunny to an alarmingly selfish degree. PG: PSYCHO GOREMAN is that scene in a self-serious movie where the hero looks upon the technological creation or mystical conjuring of the main villain and remarks, “This is too much power for one person,” but this time, the power in question is Kostanski’s confident grasp on such strange, unrelenting, and consistent hilarity. Nearly every line of dialogue, confused reaction shot, or extremely strange behavior from one of its characters aims for the funny jugular and always hits its mark. PG: PSYCHO GOREMAN is so obsessed with making you laugh that it willingly sacrifices several of its own jokes along the way because there’s no way you’re still not laughing over them from the most previous gag. It’s a smorgasbord of surreal, absurd humor that after a while borders on emotional abuse.

Staying true to its premise, our very young main characters are Mimi (a glorious and all-in Nita-Josee Hanna) and Luke (a perfectly put-off Owen Myre), two otherwise normal kids who spend their time playing video games or their own recklessly complicated version of dodgeball called Crazy Ball. After a very strange bet, they inadvertently dig up an alien craft in their backyard, retrieve a glowing gem, and resurrect an imposing and horrifying alien warrior from the planet Gigax, whom the kids name Psycho Goreman, “PG for short” (embodied by Matthew Ninaber and voiced by Steven Vlahos). Now under Mimi’s control, the kids begin using PG as their own personal action figure, forcing it play with them or perform various feats of strength for their own amusement. But after his awakening catches the attention of Pandora (Kristen MacCulloch, Anna Tierney, and Roxine Latoya Plummer), a member of a purposely unclear and corny intergalactic council, PG finds himself in danger, along with Mimi, Luke, and their parents, Susan (Alexis Kara Hancey) and Greg (scene-stealing Astron-6 member Adam Brooks). With the fury and might of a galaxy far far away about to rain destruction down over them and their entire planet, this dysfunctional family must band together to save their new friend Psycho Goreman, an angry and bitter alien menace who very willingly discloses that he’s going to kill them all anyway at the next possible moment. You know, for kids!

Every performance in this madness is pitch perfect, especially from the two kid leads. If you’ve explored the depths of every genre, then you know kid actors can run that gamut from great to grating, but not only do the very young Nita-Josee Hanna and Owen Myre do capable jobs, each of them perfectly encapsulates not just PG: PSYCHO GOREMAN’s overall approach but the experience of letting it into your brain and embracing its cinematic lunacy: Hanna’s Mimi is fully on board with everything happening, and she throws an unstoppable enthusiasm and exuberance into her character not seen since the earliest days of Jim Carrey; meanwhile, Mimi’s brother, Luke (Myre), is the audience – the one looking around at everything Mimi is doing and asking two things: “What the fuck is happening?” and “Isn’t this a really, really terrible idea?” It may sound like small praise, but he can rattle off a “…what?” with the perfect amount of confusion.

Also helping to bring PG: PSYCHO GOREMAN to joyous life is the blistering soundtrack by Blitz//Berlin that’s equal parts Carpenter synth, ‘90s mega-metal, and over-the-top epic orchestral, not to mention a handful of lyrical additions that are each a play on obscure soundtrack selections from ‘80s hits – like the closing-credits original rap song “Psycho Goreman (P.G. for Short)” straight out of THE MONSTER SQUAD and the power metal mash-up of “Eye of the Tiger” and COMMANDO’s concluding track “We Fight for Love” called “Two Hands, One Heart.” (I’ve also been listening to “Frig Off!” on a very loud loop in my car all week and staring hard at anyone who looks at me weird.) 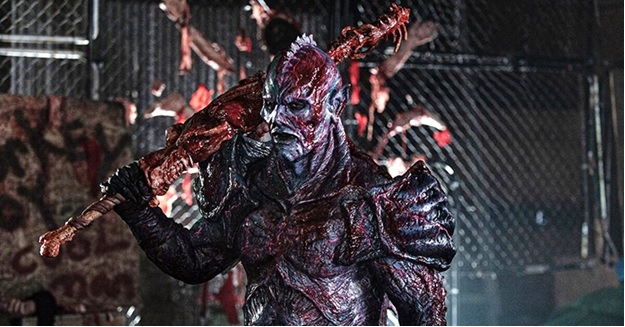 Along with an unending line of genuinely imaginative and intricate physical costumes, makeup, and monstrous creations, PG: PSYCHO GOREMAN is exactly what it set out to be and is exactly what my broken, post-2020 soul needed. It’s the only comedy I’ve ever temporarily turned off during play because I was afraid I was going to pop a blood vessel in my brain from laughter. If there really is such a thing as killing someone with comedy, PG: PSYCHO GOREMAN is the closest I’ve come yet.

Thankfully, RLJE’s Blu-ray release is absolutely stuffed with special features, amounting to over two hours of behind-the-scenes content and insights. Also thankfully, most of the special features, though appearing in the form of your pretty standard interviews, contain their own strange dose of hilarity, from Kostanski’s director interview where he describes PG: PSYCHO GOREMAN as purposely stupid more than twice to Adam Brooks’ own actor interview where he offers straight-faced responses to questions asked by a motionless panda bear sock puppet (or something). Every avenue of the film’s making gets its own special feature, among them an interview with the three composers who make up Blitz//Berlin and a look at the movie’s intricate physical effects. 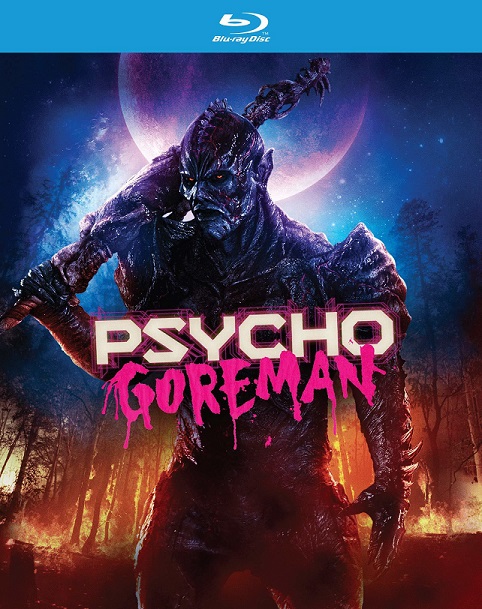 Though I’ve rattled off a thousand words that utterly gush over PG: PSYCHO GOREMAN, you have to know going in that you’re in for a very specific comedic experience and it’s absolutely not going to be for everyone. If you’re unfamiliar with Astron-6’s previous work, which also includes their giallo spoof THE EDITOR, you can start right here with their BIOCOP fake trailer. If you’re not in on the joke, stay far away from PG: PSYCHO GOREMAN, but if you find yourself laughing and want to see more, then your whole life is about to change for the better.

PG: PSYCHO GOREMAN is now on Blu-ray from RLJE Films, and thank fuck for that.