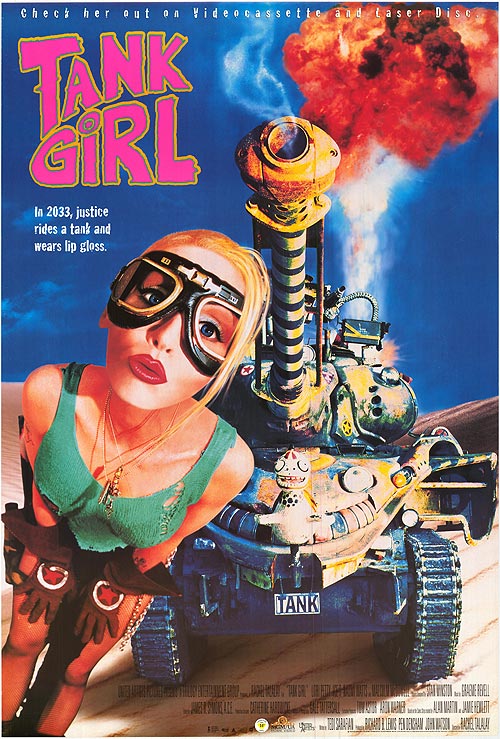 Post-apocalyptic movies are, by their very nature, rather monochromatic and dreary. After all, when the world ends, it doesn’t exactly look like Disneyland. One of the things that makes 1995’s TANK GIRL so special is that it represents a reverse image of what you normally get in the genre. It’s bright and colorful, with a kooky sense of humor and enough WTF? moments to power an entire season of the Cartoon Network’s Adult Swim lineup. In the not-so-distant future, Earth has been struck by a comet, and water is scarce. An organization known as Water & Power controls the flow of all remaining liquid, and its leader, Kesslee (Malcolm McDowell), is exceedingly stingy. He meets resistance in the form of Rebecca (Lori Petty), a wisecracking, free-spirited young woman who lives in a commune with its own private well. The commune is attacked by W&P, and Rebecca is taken into their custody. She soon meets another captive, the timid Jet Girl (played by a then-unknown Naomi Watts). They eventually escape and lead a revolt against W&P, with the help of a group of half-human/half-kangaroo people, one of whom is portrayed by rapper Ice-T. A giant tank that Rebecca commandeers also comes in handy. While the situation is dire, Rebecca’s attitude is not. Sure, the world as we know it has come to an end, but that doesn’t mean life can’t be a party, right?

TANK GIRL is based on a British comic book series by Alan Martin and Jamie Hewlett, the latter of whom created the visual side of the rock band Gorillaz. The movie attempts to capture the feel of their work. Film critic Roger Ebert summed it up best in his review, in which he said: “Here is a movie that dives into the bag of filmmaking tricks and chooses all of them. Trying to re-create the multimedia effect of the comic books it’s based on, the film employs live action, animation, montages of still graphics, animatronic makeup, prosthetics, song-and-dance routines, scale models, fake backdrops, holograph, title cards, matte drawings, and computerized special effects. All I really missed were 3-D and Smell-O-Vision.”

Ebert didn’t care much for the movie, but his description exemplifies what makes TANK GIRL such a novelty. In 1995, superhero/comic book movies were still in their relative infancy. Tim Burton had revolutionized them with his original BATMAN in 1989, but they had yet to achieve the kind of intensity that Christopher Nolan eventually brought to his DARK KNIGHT trilogy, or the seriousness-of-purpose that marks most of the entries in the Marvel Cinematic Universe. No one knew for sure what a movie of this sort could, or should, be. That gave TANK GIRL a lot of room to experiment, which it did with an admirable sense of reckless abandon. In addition to possessing an intentionally manic performance from Lori Petty, the film opts to be more attitude-driven than plot-driven. The editing is frantic, a few key sequences play out via animation, and rapid-fire montages of comic book art are inserted into the middle of scenes. A Courtney Love-designed soundtrack – featuring songs by Devo, Björk, Hole, and L7 – helps set a distinct punk-rock tone. The story is ambling, at best, yet the sheer force of the style compensates for that flaw. 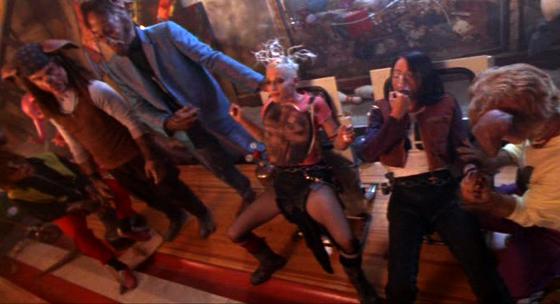 At the time of its initial release, TANK GIRL seemed like it was trying a little too hard to replicate the feel of its source material. Seen today, the approach comes off differently, now playing as very controlled and inventive. Maybe several years of Marvel’s pervasive self-reverence makes the raucous, hyperactive nature more palatable. Regardless, it’s clear that the movie truly wants to be a comic book come to life, and in that sense, it is entirely successful.

The other thing that makes TANK GIRL of note is that it was directed by a woman, Rachel Talalay. A former producer who moved behind the camera for 1991’s FREDDY’S DEAD: THE FINAL NIGHTMARE, Talalay accomplished twenty years ago what many women in Hollywood are fighting to accomplish today: she directed a comic book movie. We all know that female filmmakers have largely – and unfairly – been excluded from helming these pictures. Patty Jenkins and Michelle MacLaren were both hired to bring superheroes to the screen (for the THOR sequel and the as-yet-unmade WONDER WOMAN, respectively), only to depart after studio suits didn’t approve of their visions. Lexi Alexander made PUNISHER: WAR ZONE, but that was a low-budget production not tied in to the official Marvel Cinematic Universe. 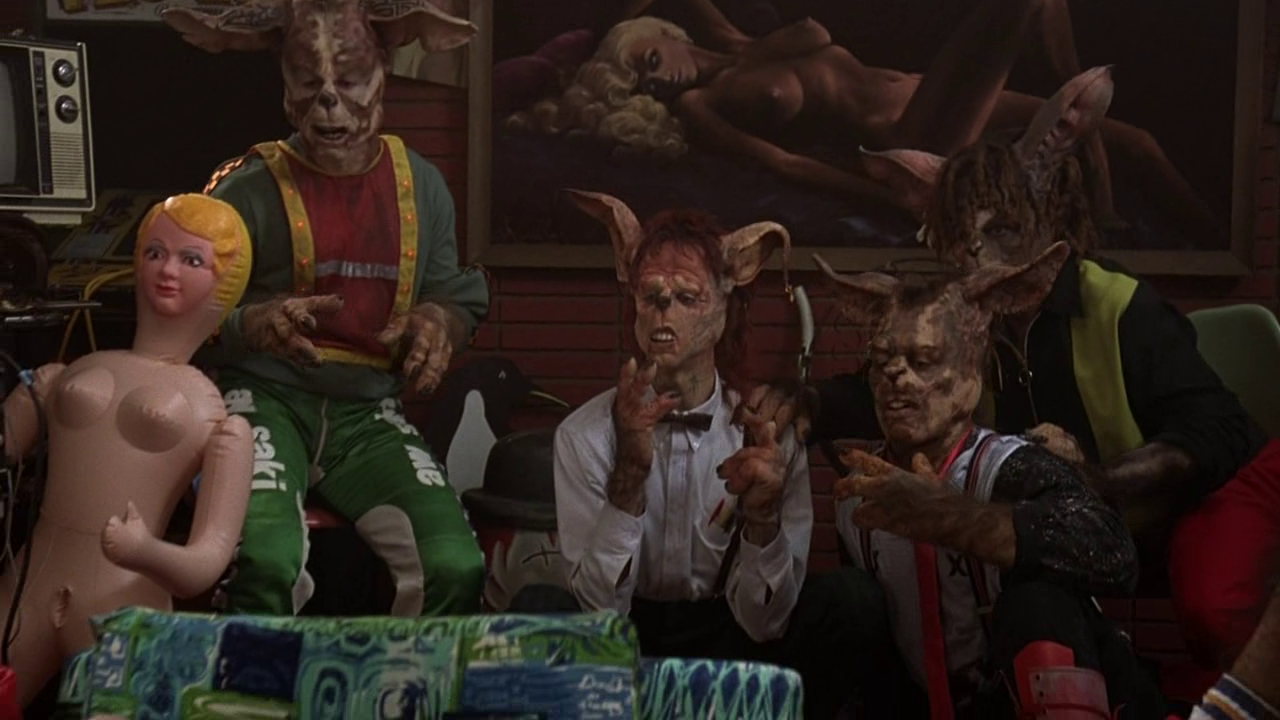 Talalay, meanwhile, was able to secure a decent-sized budget and to work for a major studio, MGM. Her efforts here prove that women can direct a comic book movie with the same flair and style as any man, and also that a female hero can grace the screen without needing to be either defeminized or overly sexualized. My goodness, do we need more movies like this! Most important of all, TANK GIRL is a lot of fun. You never know what’s going to happen next, whether it’s a spontaneous Busby Berkley-inspired musical number or a scene where Rebecca shoots beer cans out of her tank at Kesslee. The film’s wild energy and unpredictability are ceaselessly compelling. And if the idea of watching a bad-ass “riot grrrl” riding around in a tank and fighting bad guys alongside Ice-T in a kangaroo costume doesn’t excite you, I don’t know what will.

TANK GIRL may well be the most joyous, effervecent movie ever made about life after the apocalypse. 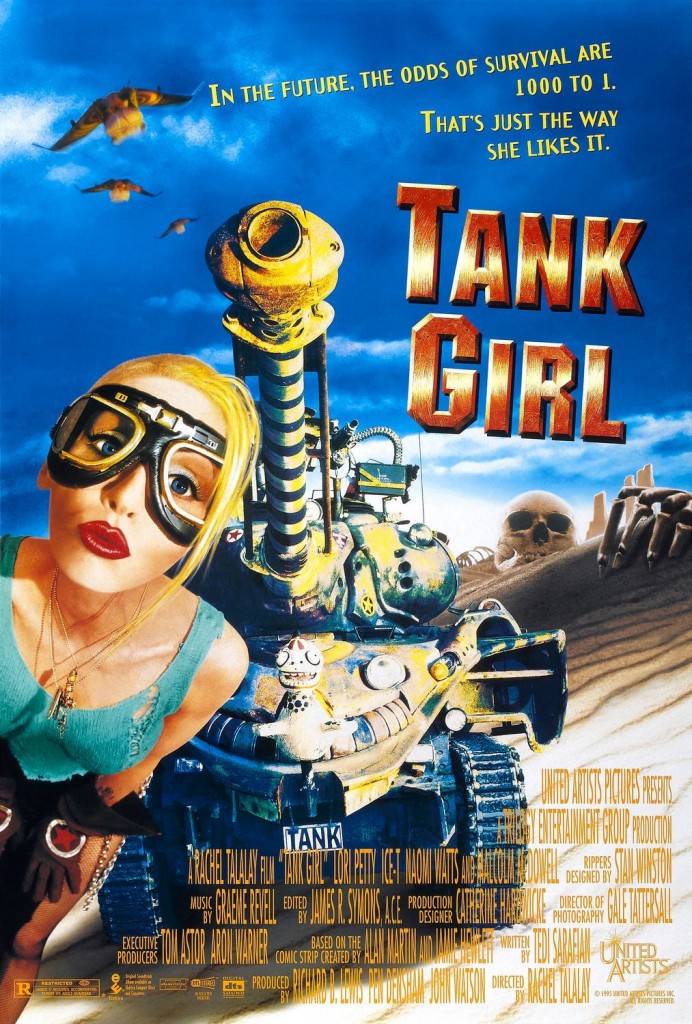