Tarantino has a mission: to make DJANGO UNCHAINED the biggest brotha in the room when it comes to tales of southern vengeance. The man is just dialed in right now. Just have a look at a few excerpts from the Playboy interview (which I am sure you’re reading right now… you know… just for the articles). The care he is taking with this story, the passion that is pouring out for these characters. Expectations are high for DJANGO UNCHAINED, but nobody has higher expectations than the man himself. Here are a few clips from the piece, but click the link below to read the entire interview, it’s solid as hell.

On Will Smith and Jamie Foxx:

PLAYBOY: You originally wanted Will Smith to play Django. How close did you come to getting him?

TARANTINO: We spent quite a few hours together over a weekend when he was in New York doing Men in Black 3. We went over the script and talked it out. I had a good time—he’s a smart, cool guy. I think half the process was an excuse for us to hang out and spend time with one another. I had just finished the script. It was cool to talk to someone who wasn’t guarded about what he was saying.

PLAYBOY: What did he have to say?

TARANTINO: That’s private stuff between us, but nothing negative.

PLAYBOY: He has to evaluate material partly based on his status as arguably the world’s biggest star and certainly its biggest African American star.

TARANTINO: Yeah, I know. But he didn’t walk away from it because he was scared of the material.

TARANTINO: It just wasn’t 100 percent right, and we didn’t have time to try to make it that way. We left with me saying, “Look, I’m going to see other people.” He said, “Let me just see how I feel, and if you don’t find anybody, let’s talk again.” And then I found my guy.

TARANTINO: There are a lot of reasons I could say, but the gigantic one is that he was the cowboy. I met six different actors and had extensive meetings with all of them, and I went in-depth on all their work.

TARANTINO: Idris Elba. I got together with Chris Tucker, Terrence Howard, M.K. Williams.

PLAYBOY: Williams, from The Wire and Boardwalk Empire?

TARANTINO: Yes. I talked with Tyrese. They all appreciated the material, and I was going to put them through the paces, make them go off against one another and kind of put up an obstacle course. And then I met Jamie and realized I didn’t need to do that. Jamie understood the material. But mostly he was the cowboy. Forget the fact that he has his own horse—and that is actually his horse in the movie. He’s from Texas; he understands. We sat there talking, and I realized, Wow, if this were the 1960s and I was casting a Django Western TV show and they had black guys as stars of those in the 1960s, I could see Jamie on one of those. And that’s what I was looking for, a Clint Eastwood.

PLAYBOY: When Playboy interviewed Foxx several years ago, he talked about growing up in Texas. Even though he was the football team’s star quarterback, he was regularly called racist names and treated badly. How did that inform his performance?

TARANTINO: He understood what it’s like to be thought of as an “other.” Even though he’s on the football team, one of the stars, when he goes out with the pretty white girl in the school, everyone loses their minds. He understood what it’s like to be hired as a piano player in a big white Texas home. When you’re the black piano player at a cocktail party, you’re furniture. You don’t talk to nobody. No one talks to you. They’re not supposed to even think about you. They should be able to say anything they want to say because you are furniture.

PLAYBOY: You write terrific villains. Who set the bar highest for bad guys for you?

TARANTINO: Lee Van Cleef is one of my favorite actors. I love him in The Good, the Bad and the Ugly.

TARANTINO: You can point at a movie like Schindler’s List and there’s Ralph Fiennes. And there’s No Country for Old Men and Javier Bardem, and Inglourious Basterds and Christoph Waltz. The last time I watched a regular genre movie and the bad guy showed up and blew me away was Alan Rickman in Die Hard. It was the way he took over the film. It’s definitely fun to write characters like that. But what I’m always trying to do, even in the case of Reservoir Dogs, is get you to kind of like these guys, despite on-screen evidence that you shouldn’t. Despite the things they do and say and despite their agenda. I also like making people laugh at fucked-up shit.

On stopping (possibly) at 10 films: 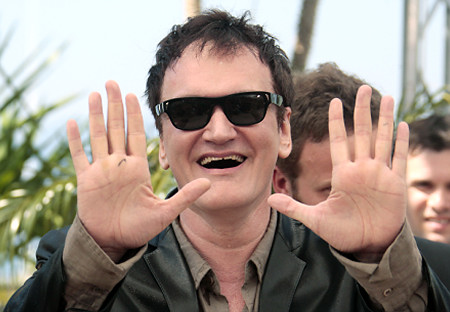 PLAYBOY: When a director jumps the shark, doesn’t it have more to do with him getting fat and happy and losing his edge or not listening?

TARANTINO: Could be, but it’s also age. [laughs] The directorial histories don’t lie for the most part, but I’ll concentrate on a unique example: I hadn’t thought about how old Tony Scott was until he checked out. And I knew him. I thought, Wow, Tony was close to 70?

PLAYBOY: As a director, how will you know when you’re not capable of that anymore?

TARANTINO: Well, I guess that’s what I’m trying to figure out.

PLAYBOY: You don’t turn these things out once a year. How many films do you have left in you?

TARANTINO: You stop when you stop, but in a fanciful world, 10 movies in my filmography would be nice. I’ve made seven. If I have a change of heart, if I come up with a new story, I could come back. But if I stop at 10, that would be okay as an artistic statement.

Click the image below to read the full interview (and look at some bunnies while you’re at it):