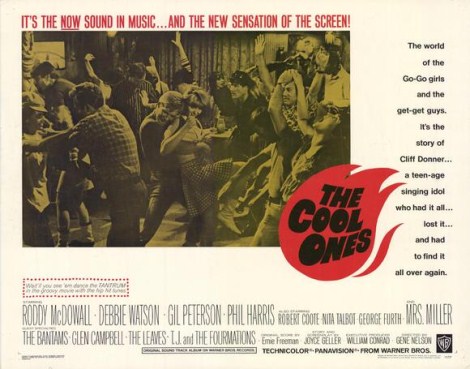 The sheer number of pop music films released in the ‘60s in an attempt to cash in on the sudden influx of rock’n’roll music is staggering, and the bands and singers they were intended to promote have fallen into such obscurity that it’s no wonder that so few are available on legitimate home video.  Unless it’s a known title (BYE BYE BIRDIE), features a known band (A HARD DAY’S NIGHT), most ‘60s pop music movies have fallen to the fringes, highlighted only by the occasional TCM airing at 2 AM on a Tuesday.

As a result, there’s a whole subgenre full of undiscovered flicks, and while most of them aren’t going to be revered as classics, there’s a lot of fun to be had.  Gene Nelson’s 1967 flick THE COOL ONES, recently released on DVD-R via Warner Archive, is firmly in this camp.  While it’s never quite sure if it wants to be a straight musical or a pop music cavalcade, it’s still an enoyable rock’n’roll cash-in with a couple of name stars, most notably a gleefully scenerly-chewing Roddy McDowall, and a sharper-than-average wit backed by some solid music.

Despite his top billing, however, McDowall doesn’t make his entrance until over a half-hour into the film, as the first third follows the lacking musical careers of Hallie, a dancer on a “Hullaballo”-like show called “Wizbang” played by one-time Marilyn Munster Debbie Watson,  and Cliff, a faltering pop star played by Gil Peterson.   Hallie wants to break into the business, but a pair of shady music executives doesn’t deliver on their promises, and Cliff just wants to get out after the same pair try to get him to go the nostalgia route.

While Cliff plays a small club, Hallie dances on the show (alongside, among others, Teri Garr) and gets frustrated enough to grab the mike and do her own singing and dancing in the middle of a number, getting her thrown off, but inadvertently inventing a new dance sensation, The Tantrum.  This catches Cliff’s attention, and the two enlist the club owner’s brother, teen tycoon of rock Tony Krum (Roddy McDowall), to turn them into bonafide hits, much to the chagrin on Cliff, who just wants out. 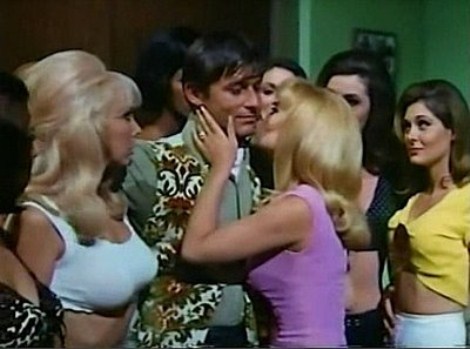 There’s the usual batch of romantic/comic entanglements, as the pair become involved, but then don’t, but then do again, with Krum trying to orchestrate the whole thing with the help of his two cohorts, played by Jim Begg and Nita Talbot.  Begg is good as the sheepish Charlie, who reads Krum to sleep at night, but Talbot steals every scene she’s in with vampy goodness as Dee Dee, a sexpot hanger-on perfectly willing to seduce Cliff to make sure Krum’s plan works.

The plot is light stuff, but THE COOL ONES at least stands out from the similar pack of films due to a screenplay by Joyce Geller that seems to be more intent on sending up the recording industry rather than embracing it, though the satire is light enough that it never becomes more than a light comedy with a couple of showbiz barbs.  The music is just as confused as the rest of the film, as it contains both out-of-nowhere full musical numbers along with the performances, though thanks to songwriter Lee Hazelwood and backing group The Leaves, none of the numbers are unpleasant even if only the truly memorable piece is “This Town,” thankfully used twice in different styles.  The biggest problem is that Watson, while a talented actress, isn’t much of a singer, so you never really buy the idea that she’d be the next big thing if only given a chance.

THE COOL ONES had long been on my list of films to see, not just because it’s a ‘60s pop music film that skewers the industry and features a great performance by McDowall, but also because it’s the sole cinematic performance of Mrs. Miller, the singer who rose to a weird level of fame in the era with her off-key renditions of pop hits.  Her oddball renditions of the likes of “Downtown” were described as the sound of “roaches scurrying across a trash lid,” and while nobody would describe them as “good,” she became one of the first “outsider musicians” to hit the big time, not despite but because of her shrill warblings.  Like Florence Foster Jenkins before her or the likes of Tiny Tim, William Hung or Wing afterwards, Mrs. Miller was an artist that became inexplicably popular, yet nobody really knew quite what to do with her.

This is readily apparent during her small role in THE COOL ONES – Miller plays herself, or at least a character with the same name, as a supportive wardrobe lady on the Whizbang set.  During the big finale, in order to prevent dead air, Miller gets to sing “It’s Magic” on stage as she’s always dreamt of, and the audience laughs at first, but then embraces her awkward tones.  McDowell’s character, of course smells a hit, but the whole thing feels strange, even coming from a film that’s supposed to be a satire – if there would ever be a perfect time for a Springtime-for-Hitler-like reaction shot from the audiences, this would be it.

Never released on any home video format, Warner has released THE COOL ONES with a nice, anamorphic transfer preserving its’ 2.35:1 aspect ratio with minimal grain.  The ‘60s colors and costumes pop wonderfully, giving the look of the film a depth far greater than that of its’ plot.  While no extras are included, you can see the trailer below, and it sells the film for exactly what it is – if you enjoy this, you’ll probably be good with checking out THE COOL ONES in full.