Home  ⁄  The Wire  ⁄  THE LATEST FILM FROM DUSTIN MILLS, EASTER CASKET, NEEDS YOUR HELP… TIME TO INDIEGOGO THIS SUCKA!

Dustin Mills was the very first filmmaker we featured on DG back when we launched in August of 2011. We’ve been there through puppets and zombies; we’ve waded through gallons of blood and done our share of freeze frames on the ample booberage his films tend to have (yes, even the puppet booberage, it’s not nice to judge). For what I think may be his first attempt at crowdsourcing, Mills is turning to his fans to raise funds for his latest film EASTER CASKET. We may still be waiting for a certain jolly fat fucker to bring holiday cheer to girls and boys, but it’s not too early to think about the possibility of an Easter Bunny fucking up an ungodly amount of shit.

We’re talking bodies flying left and right. A warrior priest doing what he does best to stop him. Hell, let’s let Mills tell us what’s what with his flick: ” All hell breaks loose when Peter Cottontail aka The Easter Bunny hears that the Catholic Church is about to do away with all Easter rituals not pertaining directly to the resurrection of Christ. With Father Asher (A warrior priest) hot on his trail Cottontail starts a rampage leaving the bodies of the clergy (and a few schoolgirls) in his wake. Can Asher stop him before its too late? Only one thing is certain: March 26th is gonna be a bad hare day!

Are you down to drop some cash or are you down to drop some cash? DG is behind this 100%. This kid is going to be big. I think he has already made a certified cult hit with PUPPET MONSTER MASSACRE and he probably has his share of cult hits left in him but at some point he is going to get the chance to do a project with a sizable budget and you can have your “I supported him when…” moment. Do the right thing, click here and donate. Click the poster below to donate. Find a way, and donate. We need fucked up Easter Bunnies. We need EASTER CASKET. This won’t be the last time you hear about this flick on the site, just try and make sure the next time we talk about it you;ve already tossed some bills to the project. 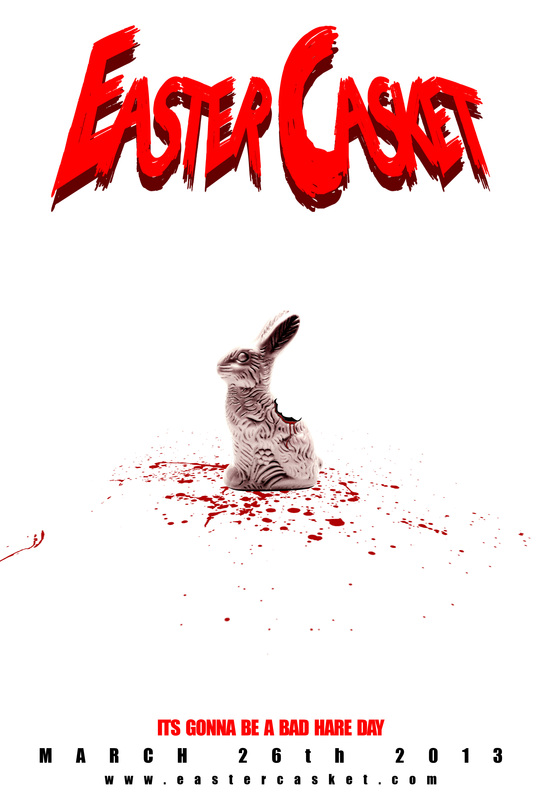 CLICK THE POSTER TO DONATE TO THE INDIEGOGO CAMPAIGN