[Please Note: The Last Of Us is over six years old, so please be aware there are spoilers throughout this piece.]

When my daughter was born, something happened in me—a seismic psychological shift that I wasn’t acutely aware of yet as I was basking in the afterglow of this beautiful being brought into this world that I had a hand in creating. But the glow eventually wore off and though the bone-deep love is still there, an unrelenting concern snuck into my mind and festered there like a cold, cruel merchant that took all the good feelings and replaced them with the bad. It’s a shift from joy to fear. That unrelenting concern? It’s that, even with all the beauty in the world, there is an insidious brutality and the majority of the time it wins. The world exists to do one thing: keep spinning and eventually, maybe, it could chew you up and spit you out. You look at your children and try to return to them the same joy they provide you, even with the potential threat of nuclear war on the horizon. Or you hug your children, grateful that the senseless school shootings all over America haven’t happened in your backyard…yet. The fear of losing your child or loved one isn’t the purpose of what drives us though. It’s that we exist in their lives (and they in ours) so that we can work together to make this world a better place. And this is the core of The Last Of Us, one of the single best video games and stories of the past decade, a game I’ve played about thirteen times that I’d like to discuss in depth with you all.

“I dedicated my life to this cause and…now I won’t get to see whether we make it or not. I joined the Fireflies shortly after the outbreak. And here was a group willing to do whatever it took to save us from this plague when the government was willing to retreat to ghettos. I couldn’t just give up on our country. Give up on humanity. God, that sounds trite. Anyway…there have been years that felt like we were onto something…like we might actually eradicate this thing. Those were usually followed by years of utter despair. Like this whole fucking thing was a giant waste of time. It feels like the past few years were more of the latter. We haven’t had a breakthrough since the passive vaccine test we ran…what? Five years ago? Now this entire lab has been compromised and the higher-ups have decided to abandon the university. I’m just fuckin’ tired…I can’t do this anymore. I’m not gonna do this anymore. If you’ve made it here looking for the others, they’ve all returned to Saint Mary’s Hospital at Salt Lake City. You’ll find ’em there. Still trying to save the world. Good luck with that.”

For those who haven’t played 2013’s The Last Of Us the plot centers on a grizzled smuggler named Joel (Troy Baker) who is tasked with the mission of escorting Ellie (Ashley Johnson), a 14-year old girl, across a vast and violent countryside to a group called the Fireflies, a grassroots militia organization funded as a revolt against the merciless, institutionalized government. Ellie is immune to the world-ending virus that decimated the population. Along the way, the duo encounter plague-riddled Infected, PTSD-addled allies, and scummy scavengers. Setting the game over the four seasons a la REQUIEM FOR A DREAM not only provides a shorthand for the passage of time, but it allows us to feel the length of the story and understand just how much the events of a journey can wear on someone. Ostensibly, a road movie melded with stealth and horror/action elements, The Last Of Us starts us deep in the heart of Texas, with the apocalypse in its infancy. It’s brilliant to start a game off this quietly, through the eyes of a character (Sarah, Joel’s daughter) whose perspective will not be revisited because, to dig the knife in deeper, the game kills her off, shot by a faceless military soldier. This cruelly, thankfully all serves a great purpose which is to grind your emotions endlessly, so that you can take control of Joel, 20 years later, carrying a world of grief on his shoulders as players begin shepherding Ellie from Boston to Pittsburgh, through hell and back. 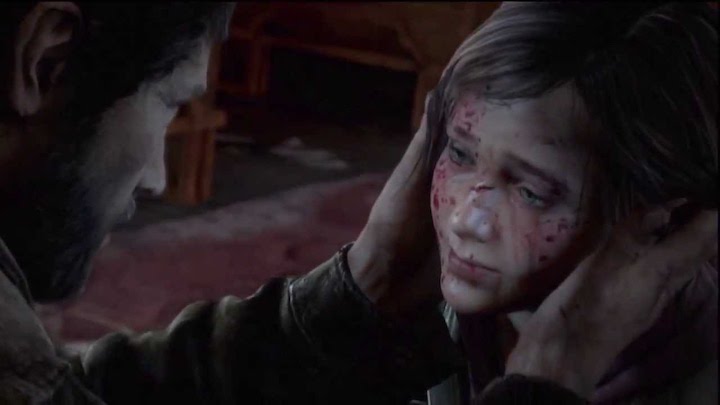 “Everyone I have cared for has either died or left me. Everyone—fucking except for you! So don’t tell me that I would be safer with someone else, because the truth is, I would just be more scared.”

“You’re right…You’re not my daughter…and I sure as hell ain’t your dad. And we are going our separate ways.”

The relationship between Ellie and Joel is the cornerstone to the entire game and the reason the game is incredibly impactful. From the moment the two meet, there’s no surprise that they’ll forge an unshakable bond over the course of the many hours you’ll be playing. At the outset, it’s clear that the relationship will be built upon the plateau of a father/daughter scenario, considering that Ellie is close to the age that Joel’s daughter was prior to her death, and, by the end, you feel that kinship when rescuing Ellie from the hospital in the game’s second to last chapter, waving a gun around like a madman to rescue her from death at the hands of the Fireflies. The companionship progresses realistically, from a begrudging partnership to full blown familial love, the disgruntled Joel and perky Ellie eventually finding the similar grounding in their perspectives in the world, aligning with each other’s rhythm through character-based interactions, rather than doing it because it’s the demand of the story. Whether it be Ellie pestering Joel with her jokes or learning how to whistle, she becomes endearing to us as she does to him. A whole lot of credit goes towards the script, yes, but the main thrust of what sells Joel and Ellie’s bond are the performances of Baker and Johnson. The two actors throw themselves completely into their characters during the mo-cap sessions.

His grizzled Southerner matching her soft-spoken ferocity makes them feel flesh and blood rather than polygonal. With Joel, we know very little of what went down in the ensuing 20 years since Outbreak Day—brief dialogue snippets tell us that he’s done some villainous things in the pursuit of survival. But he finally opens up here and there as the story careens towards the end, stopping Ellie when her interrogations of his life go too far. The riveting scene where the pair fight it out after Joel attempts to drop Ellie off on his brother is a sequence I look forward to every time I play. Their relationship is the soul of the game that hooks players into the world.

“I will not turn into one of those things. Come on. Make this easy for me.”

It’s no secret that the important parts of a massive, story-driven game is its side characters, and The Last Of Us delivers this in spades. There’s Tess, Joel’s partner in crime, a person whose cold-blooded, compassionate nature is a large part of her identity. There’s something about a tough-as-nails character who doesn’t exist to fulfill a girlfriend/relationship quota, though there are hints of this in her lived-in conversation with Joel. Tess, as it stands, is a person who can be brutal when it calls for it, and caring when the need arises. The hurt in Annie Wersching’s line readings when it’s revealed that Tess has been bitten is something you can feel inside you. Then there’s Bill. From the moment we encounter paranoid Bill, he’s already a three-dimensional character thanks to the immensely talented W. Earl Brown providing his voicework. We feel the distrust that Bill has for Joel in every line reading, even as it’s clear they have a pre-established relationship prior to our introduction to him in his “town.” He also adequately provides the believable crazy (but not too crazy) persona that one would have living isolated in a town filled with the Infected.

In Pittsburgh, there’s Sam and Henry, brothers who are scraping by to survive, living by a post-apocalyptic code (stealing to survive, not things you just want), and having a bond that only brothers can have. Which means that yes, Henry is a dick to his little brother sometimes, but it’s not to be hurtful—it’s to keep him alive. The final scenes with Henry and Sam are striking, because it allows the burden of grief to fall on other characters for a change: Sam is bitten and infected, turning and nearly killing Ellie before Joel kills him. Then, Henry commits suicide right before a smash cut to FALL. It’s tremendously poignant, in that we see nothing like this in video games often, but also reminds me of the brilliant smash cut to “’80s” right as William H. Macy blows his brains out in BOOGIE NIGHTS. It takes my breath away every time because we’ve had time to get to know these characters before the cruelty of the world lands another effortless blow. Lastly, there’s Joel’s brother Tommy and his wife Maria. We meet Tommy at the game’s beginning and the game keeps his fate vague (Joel mentions that he shacked up with the Fireflies) until we meet him at the dam during the Fall segment. Maria and Tommy are setting up a new town by Jackson County, near the dam. The game exemplifies its hope and humanity through Tommy and Maria’s efforts to create a settlement. Houses, electricity and food: that’s what they offer this world torn apart, and what I really love about all of it is that—in the midst of violent, aggressive people trying to wreck a society that’s already been destroyed—there are people who will pull themselves up, wipe off the dust, and start building again. God help us, if an apocalypse were to happen, that’s the people I’d want in my corner. 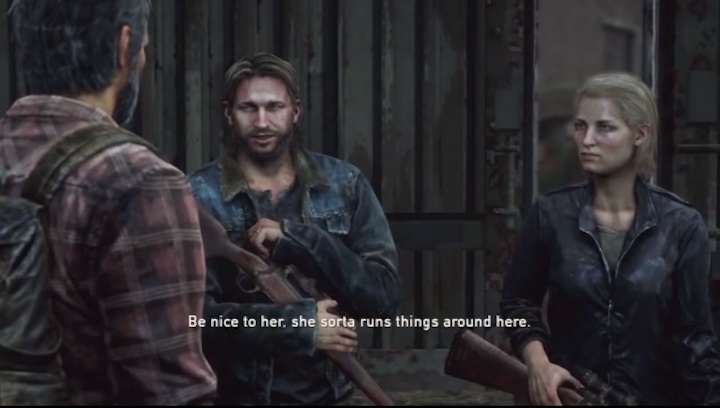 Tune in Wednesday for Part Two on the legacy of The Last Of Us.