HARD ROCK NIGHTMARE is not a good movie. It’s not even a “so bad it’s good” movie, really. What it is, however, is a movie with the pure unbridled cojones necessary to open with a five-minute flashback, in sepiatone, featuring an elderly gentleman staring down a little kid and threatening to murder his family:

The old man goes to take a nice nap in his hammock, and the kid—Jim, his grandson—creeps up on him and drives a stake through his heart.

12 years later, Jim is in a rock band, “The Bad Boys,” and they decide to go out to his grandparents’ house, which he’s inherited in the interim. They do this because when they rehearse in their garage, they draw a crowd. This is a thing that happens.

The movie makes choices like this all the way through its running time. It’s not a good movie, although it has magnificent moments. It’s not “so bad it’s good,” although it certainly has some truly awful moments, too. What it is, at heart, is a mesmerizing movie. It makes choices—musical choices, acting choices, editing choices, sound choices—that elicit bewilderment, bafflement, and befuddlement.

You’ll laugh. You’ll groan. You’ll stare down at your phone for minutes during interminable slow bits. You’ll google “was it legal to wear a shirt with the Nike logo on it for an entire movie in the 1980s?” (It was, though it was certainly unwise.) But if you want to do any of this, you’d better have a VCR, because it seems unlikely that this movie will get a digital release any time soon. 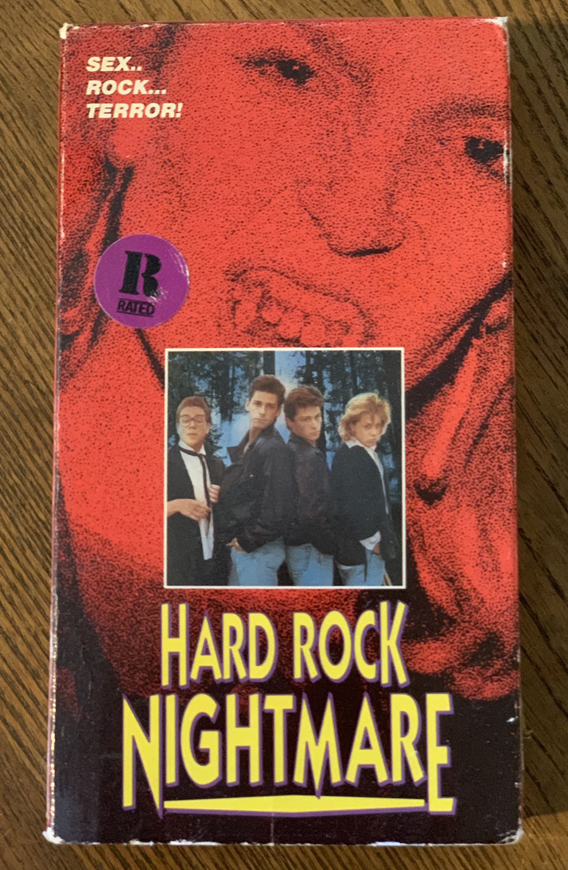 The author’s own personal copy of HARD ROCK NIGHTMARE

Jim’s beloved Uncle Gary expresses some concern about the decision to go out to the farmhouse. The last time Jim was there, he murdered Uncle Gary’s dad, after all. The only reason Uncle Gary’s worth mentioning is because Uncle Gary is the best part of this movie. Uncle Gary is played by Troy Donahue—one-half of the inspiration for The Simpsons‘ Troy McClure—and hooooooo lordy, does he chew the scenery. Or rather, he does whatever the opposite of scenery-chewing is. He figures out the perfect way to chew the scenery and does the exact opposite. He barfs all over the scenery. It’s exquisite.

The Bad Boys drive out to the farmhouse in their Winnebago. Their girlfriends accompany them. One woman apparently just decides to join them on the spur of the moment, walking up to the Winnie without asking any questions, like “how long will we be gone?” This is a germane question– they drive all day, all through the night (to allow for a nightmare sequence), through a lot of the next day, and then they have to walk forever– carrying their gear– until they arrive, under the light of a silvery full moon, at a beautifully finished, fully furnished, well-lit mansion.

These are choices the movie has made.

Once The Bad Boys get to the farmhouse, there’s a lot of weirdo canoodling (this was a 1980s horror flick, after all), a terrible rehearsal / music video, MORE canoodling, and then one of the band members has his head knocked off his shoulders by a werewolf. It looks like a bloody tee-ball.

Then, while trying to call the cops and discovering the phone lines are cut, one of the other guys tries to figure out how he to bang a groupie.

When it comes down to it, HARD ROCK NIGHTMARE is just one of many Rocktober horror flicks featuring a band trudging off to a remote location to rehearse, record, and be terrorized by unholy beasts from [another dimension / the pits of hell / outer space / the darkness within the human mind]. It’s not as imaginative or muscly as the similarly-named ROCK’N’ROLL NIGHTMARE, which starred Jon Mikl Thor and came out the same year. It’s not as gory as BLOOD TRACKS. It’s not as stylish as PAGANINI HORROR. It’s not even as laughably bad as HOUSEBOAT HORROR.

But damn if it isn’t fascinating.

Jim starts trying to convince everyone that his dead grandfather is back from the dead, as a werewolf, and is trying to get revenge by killing everyone. They aren’t buying it. The phones are dead, so one of the band members and his girlfriend decide to go to the RV and drive to a nearby radio station to call for help. Some other band members sneak into the woods, smoke some reefers, and do some serious boning. The guy says this. He says, “I want to do some serious boning.”

It goes about as well as can be expected.

Here’s Jim’s nightmare. It’s like…it’s like if David Lynch got massively impaired on a shitload of lean and then decided to do a 2-minute encapsulation of A NIGHTMARE ON ELM STREET 2: FREDDY’S REVENGE.

So many choices in this scene alone. Why the underwear swap? Why the bizarro light filter? Why the puke, for Christ’s sake? It’s not good. It’s not “so bad it’s good.” It’s just… you can’t look away.

It’s important to note that every single scene featuring the drummer also features the drummer spinning his drumsticks in that hand. It’s unclear if he learned that trick for the film and needed to make sure everyone knew he could do it, or if the filmmakers made the choice for him. The choice…was made.

Okay, here’s where it gets really spoilery. Also, the best clip is coming up in a bit, so… make your choices accordingly.

Everyone dies but Jim, his girlfriend Sally, and the guitarist, Charlie. They find a hunk of werewolf hair in one of the victims’ hands, but… gasp! It has a “Made in Hong Kong” tag on it. This is literally true. This is a plot point.

It turns out that the werewolf was Uncle Gary’s chauffeur all along!

Now, it’s Uncle Gary’s time to shine. Just look at the genius at work! Check out the barf all over that beautiful scenery! Metaphorical barf. Not real barf.

This clip neatly wraps up everything that’s wonderful and terrible about HARD ROCK NIGHTMARE. It’s bizarre, it’s hilarious, it’s full of… well, it’s full of choices. Seems oddly apropos for a movie produced by Scott Baio‘s brother and directed by the guy who got murdered over a chocolate bar in FRIDAY THE 13TH: A NEW BEGINNING. 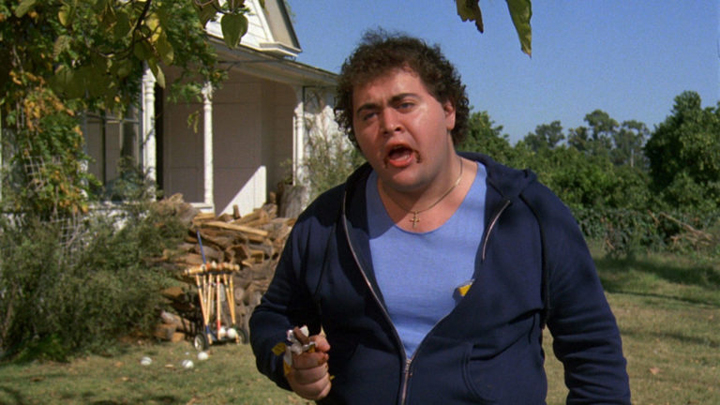 Perhaps the theme song was right, in the end– “It’s a nightmare. A scary nightmare. Gotta work real hard, so I can show my stuff.” Maybe the real hard rock nightmare…was the friends we watched get murdered along the way.

HARD ROCK NIGHTMARE happens to currently be available in its entirety on YouTube, if you want to share the pain. Choices.

Keef
Keef lives and works in Austin, TX. He mostly writes odd little stories, which you can read on the web at horriblelittlefables.com. He's also on twitter, if you like twitter, @keefdotorg. He has a collection of awful horror on VHS and a much larger collection of books.
Latest posts by Keef (see all)
Please Share