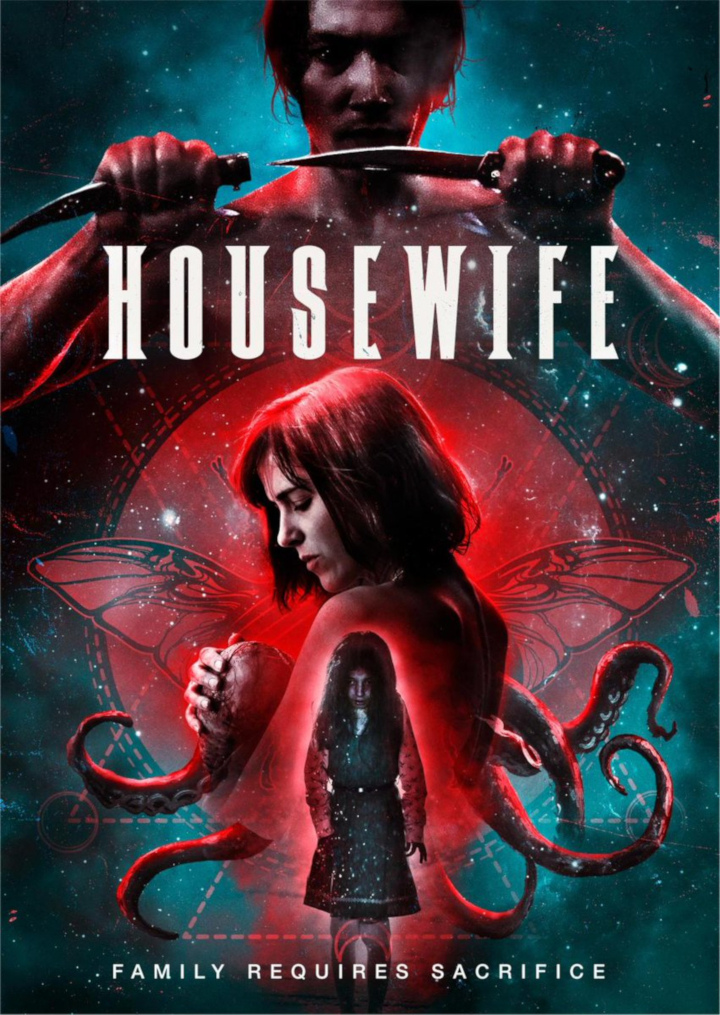 Here’s the secret about the apocalypse: it’s in you. It’s specific to each person, and those who live with depression will tell you it’s ever-present. Each day they breathe, they also show you that the apocalypse is survivable. Those who are claimed by depression are victims of their apocalypse, and you’re left behind in their rapture. HOUSEWIFE is the apocalypse of Holly Erguvan, played by Clémentine Poidatz.

Directed by Can Evrenol and co-written with Cem Özüduru (a Turkish comic book artist), HOUSEWIFE came into my life at Cinepocalypse ’17. I knew nothing about it and hadn’t seen BASKIN yet, so I didn’t know what to expect. Eighty-two minutes later, it would be one of my favorite films at the festival. Almost a year later, it would finally end up on my shelf, thanks to RLJE Films. I’d only seen it once, yet so much stuck with me all that time, which says a lot about the power of Evrenol’s film. However, watching it again revealed much more to me.

When I first saw it, I took everything at face value. Which isn’t a bad thing; movies are supposed to be enjoyed that way. But they can also be enjoyed at a deeper level. There’s a cottage industry of books full of philosophical essays about pop culture (THE MATRIX, Arrested Development, and everything inbetween) from Open Court and Wiley. Anywho, what struck me the most on the second time ‘round was that everything could be a dream. Or rather, Holly’s nightmare. Her apocalypse.

HOUSEWIFE continues the theme of motherhood currently running through horror movies like THE BABADOOK, HEREDITARY, and MAMA. In this case, it’s about how a woman doesn’t want to be a mother. It starts with Holly as a girl with her older sister, Hazel. Holly plays with dolls and Hazel draws a picture that will become very important later. Suddenly, Hazel gets her first period, and their violently-praying mother (played by Defne Halman) loses her shit when she finds out, worried that the “visitors” will do something. To the point where Holly catches her drowning Hazel in a toilet. In a panic, Holly grabs an umbrella and hides, then her mother grabs a dagger and gives chase. Just as she’s about to get killed, Holly’s father comes home. Holly’s mother kills him as Holly escapes, and the scene ends. We later find out that Holly accidentally killed someone with the umbrella.

The opening sets up everything that happens in the film and gives you clues as to what Holly’s apocalypse means. As an adult, Holly doesn’t want to have a baby and takes birth control pills without her husband, Tim (played by Ali Aksöz), knowing. In fact, children give her panic attacks. She never uses the bathroom in a toilet, preferring to use a bathtub or sink. Later, something terrifying comes for her out of a toilet. An old friend, Valery (played by Alicia Kapudag), reenters her life and brings her to a doomsday cult called the Umbrella of Life and Mind just after Tim says that they’re going to have a baby. And the maternal darkness blooms from there.

Why do I think that all of HOUSEWIFE is Holly’s nightmare? Tayman Tekin’s beautiful cinematography helps. From beginning to end, the lighting is very colorful and stylized. The way the story loops on itself, similar to LOST HIGHWAY, also helps. There’s a book on Tim’s desk about Holly called Nightmares of a Filicide (“filicide” is when a parent kills their child), which could be the film’s logline. HOUSEWIFE doesn’t operate on normal logic, especially after ULM’s leader, Bruce (played by David Sakurai), initiates Holly. Everything about the final ten minutes is a reaction to Holly’s trauma in the first ten minutes. The “it’s a dream” aspect of HOUSEWIFE doesn’t hurt it or feel cheap, though. David Lynch made a career from that, whose influence can definitely be felt in this (not in a pandering or copying way). The somnambulism that Evrenol and Özüduru infused the story with takes it from movie to myth. In this age of rehashes, it’s great to have something so daring.